Poetically named Garden of Awakening Orchids, Lan Su Yuan, the Portland Lan Su Chinese Garden is a product of a sister city association between Portland and the historic city of Suzhou, China. Lan Su Yuan is part of a cultural heritage of Chinese garden-building that flourished in Suzhou during China's Ming dynasty (1368-1644).

Through the shared vision and efforts of the office of Mayor Vera Katz and the Suzhou Foreign Affairs Department, the Lan Su Chinese Garden opened on September 14, 2000. Architects, landscape designers, and artisans from Suzhou designed and built the Garden in close cooperation with their American counterparts.

Portland's walled Chinese Garden encloses a full city block on land owned by Northwest Natural Gas. Over seventy Suzhou craftsmen lived in Portland for nine months while meticulously assembling the Garden's structures and other landscape design elements, which had been handcrafted, collected, and shipped from China. More than 500 tons of stone and rock were included, most notably the coveted Lake Tai stones from one of China's largest freshwater lakes, which appear as tall mountain peaks throughout the Garden's landscape.

In China, classical gardens follow a tradition in which each aspect conveys artistic effect and symbolic importance. The traditional delicate harmony between yin and yang are embodied in the Lan Su Chinese Garden. Water and stone, shadow and light, inside and outside are balanced to manifest the Dao, or Way of Nature. The sound of water cascading among the piled rocks drowns out the noise of the city; and the fragrant blossoms of jasmine, wintersweet, and osmanthus are intended to awaken the senses throughout the seasons. Serpentine walkways, a zig-zag bridge across the lake, and open pavilions provide visual structures from which visitors can observe or wander through a living landscape painting.

To the Chinese, no garden is complete without poetry. Inscribed on rocks, doorways, buildings, and pavilions, poetry allows for a conversation across time and place between poets and gardens.

The Lan Su Chinese Garden offers an authentic teahouse operated by the Tao of Tea. Chinese festivals are celebrated in the Garden throughout the year. Art exhibits and storytelling, docent-led tours, lectures, and concerts further highlight China's cultural traditions.

The following poem by Wen Zhengming, a Ming poet-artist (1470-1559) is inscribed on a panel in "Flowers Bathing in Spring Rain Pavilion":

Most cherished in this mundane world is a place without traffic;

Truly in the midst of the city there can be mountain and forest. 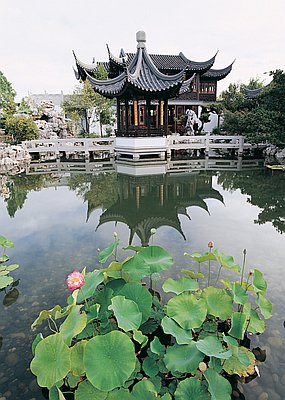 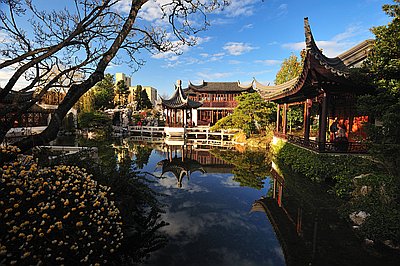 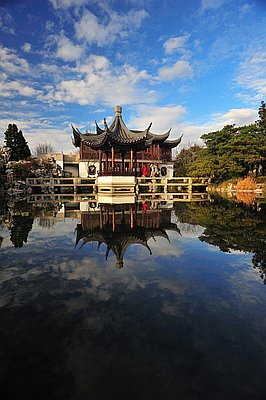 For more than forty-five years, the Portland Japanese Garden has offered a personal encounter with Japanese culture and a tranquil experience that celebrates the natural beauty of Oregon. The Garden was established in the early 1960s to strengthen ties between the people of Portland and Sapporo, Japan. Following the establishment …