For more than forty-five years, the Portland Japanese Garden has offered a personal encounter with Japanese culture and a tranquil experience that celebrates the natural beauty of Oregon. The Garden was established in the early 1960s to strengthen ties between the people of Portland and Sapporo, Japan. Following the establishment of the Portland-Sapporo Sister City Association in 1959, the Japan Society of Oregon launched a study to explore the possibility of creating a Japanese garden as a symbol of the renewed bond of friendship. The former location of the old Washington Park Zoo was selected, and the 5.5-acre site was dedicated in 1963 by Portland Mayor Terry Schrunk and Sapporo Mayor Yosaku Harada. The Garden opened to the public in 1967.

The Japanese Garden is the vision of Takuma Tono, who was commissioned to design the space in 1963. Considered one of the most important Japanese landscape architects of his time, Tono graduated from Hokkaido University in 1916 and received his master’s degree in landscape architecture from Cornell University in 1921. He returned to Japan following the devastating Great Kanto Earthquake in 1923 and taught landscape architecture at Tokyo Agricultural University. In 1961, he was commissioned by the Brooklyn Botanical Gardens to design a replica of the sand-and-stone garden of Ryoanji temple in Kyoto, which earned him international recognition.

With a climate not unlike that of central Japan, Portland was an ideal place to build a Japanese garden, and Tono took up the challenge. His master plan included several garden styles to represent historical developments and concepts in Japanese garden design: the Stroll Pond Garden, the Flat Garden, the Tea Garden, and the Sand and Stone Garden. The fifth and most contemporary style of garden, the Natural Garden, was added later to complete the site. Over the years, eight professional gardeners from Japan have overseen the Garden’s maintenance and construction, in addition to a local staff of professional gardeners.

Special features of the Garden include a 100-year-old authentic temple gate that stands at the lower entrance, a 1976 gift from the Japanese Ancestral Society of Oregon. An elegant, handcrafted Moon Bridge spans the Upper Pond in the Stroll Pond Garden, and more than two-dozen authentic stone lanterns grace the grounds, including a 100-year-old Five-Storied Pagoda Lantern that was a gift from the City of Sapporo. The Kashintei Tea House was constructed in Japan by the Kajima Construction Company and re-assembled at the site in 1968. The Garden Pavilion, constructed by Skidmore, Owings, and Merrill in 1980 in the Japanese style, features an expansive tiled roof, wooden verandas, and sliding shoji doors. The Pavilion hosts many Japanese cultural festivals, art exhibitions, and other activities year-round. The west veranda faces the dramatic Flat Garden, and the east veranda overlooks a view of the city of Portland and Mount Hood.

More important than the Garden’s individual features, however, is the extent to which Tono captured the spirit and the essence of nature, much the same way that a landscape painter might capture it on paper. The desired effect is to realize a sense of peace, harmony, and tranquility, and to feel a part of nature.

The stewards of the Portland Japanese Garden continue to strive for the same standard sought by garden designers in Japan for more than 1,500 years. At the Garden’s twenty-fifth anniversary celebration in 1988, Nobuo Matsunaga, the Japanese ambassador to the United States, described the Garden as “the most beautiful and authentic Japanese garden in the world outside Japan.” 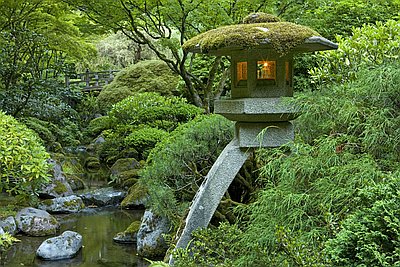 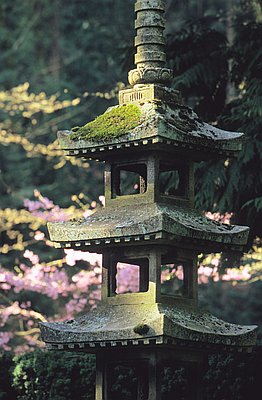 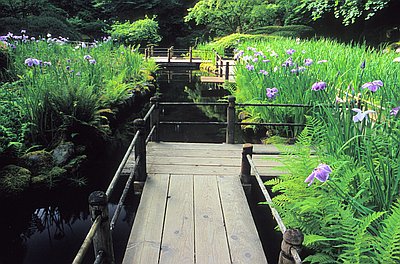 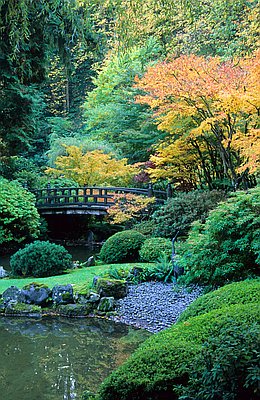 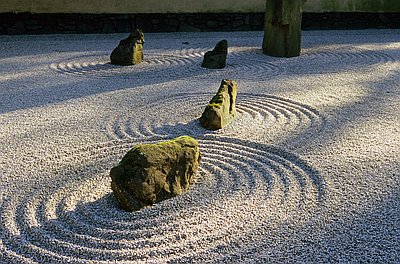 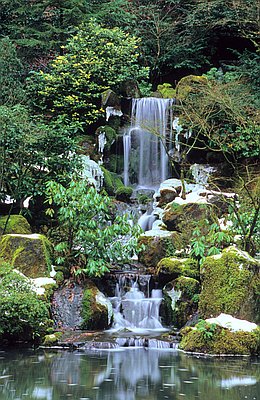