Musician, teacher, conductor, and soloist C. Robert Zimmerman inspired a generation of singers and Portland audiences in the years following World War II. Born in the Philippines, Zimmerman grew up in rural Saskatchewan and eastern Washington. He earned a bachelor's degree from Washington State College in 1940 and taught high school in Spokane before moving to Portland in 1944 with his wife Janice. His vocal teacher in Portland was Mary Evelene Calbreath.

In 1947, in response to a review by Hilmar Grondahl that the Portland Symphonic Choir's spring 1946 concert emphasized short nonclassical works, Zimmerman's choir tackled the larger choral works implied in its name. "The Palm Sunday performance of Mozart's Requiem Mass . . . by the Symphonic Choir under direction of C. Robert Zimmerman," Grondahl wrote on March 31, "served to reveal once more the heavenly beauty of that music and the increasing artistic competence of the relatively young group who performed it."

In a 1947-1948 East Coast interlude, Zimmerman won scholarships to study conducting at Tanglewood and the Juilliard Institute at the invitation of Robert Shaw, a celebrated American choral conductor. He was one of the original members of the Robert Shaw Chorale, singing with the group in its 1948 and 1955 national tours and conducting the Chorale once.

In Portland, Zimmerman conceived the Holladay Bowl, an outdoor amphitheater built by volunteers at the Lloyd Center's southern edge, where he conducted fifteen light operas in the summers of 1952 to 1955. His Central Lutheran Church choir (1951-1958), which rehearsed twice a week and sang from memory, was unusually large, with as many as seventy singers.

Zimmerman collaborated with Dom David Nicholson of Mount Angel Abbey on an RCA Victor recording of the Requiem Mass for Four Voices (1583), by Tomás Luis de Victoria, with the Portland Symphonic Choir on polyphony and the Abbey's Gregorian choir on chants. The National Academy of Recording Arts and Sciences nominated the recording as a Best Classical Performance—Operatic or Choral in 1959, the first year of the Grammy awards. Zimmerman's thesis, "The Relationship of Musical Environment to Choral Sight-Reading Ability," earned him a 1962 Ed.D. from the University of Oregon.

Zimmerman left Oregon in 1961 to found the music department at California Lutheran College in Thousand Oaks, where he taught until retiring to Spokane in 1983. 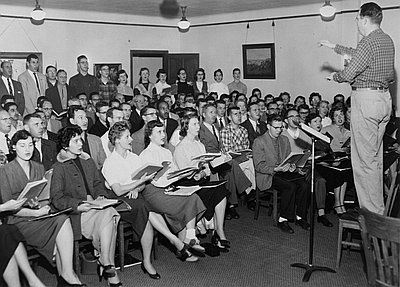 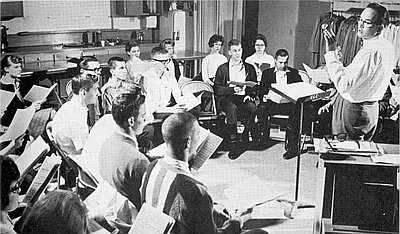 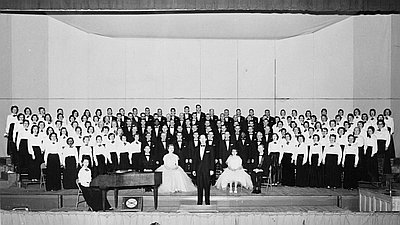 The presentation of choral music in Oregon changed when Gilbert Stewart Seeley arrived in 1975. “He has established a new standard of excellence in this region,” wrote Jacob Avshalomov, director of the Portland Youth Philharmonic. Oregonian music critic David Stabler agreed, praising Seeley's “unsurpassed interpretation.” Karen Kammerer of the …

Simeon John Trudeau Jr. was a major contributor to the musical life and culture of twentieth-century Oregon. A musician, conductor, and teacher, he was a founder of the Britt Music Festival in Jacksonville, the Portland Pops Orchestra, and the Portland Brass Ensemble. He was an advocate for the arts, especially classical …

Tomas Svoboda is an internationally renowned composer, performer, professor, and conductor who has composed over two hundred works, including six symphonies, orchestral, choral, and vocal works, diverse works for large and small ensembles, string quartets, and solo instruments, especially piano. Over fifty of his compositions have been recorded, and there …