Jean Kitts Young amassed a half-century of volunteer service and political activism ranging from civic advocacy and governmental reform to work on behalf of the Republican Party in Oregon. “Few people,” U.S. Senator Mark O. Hatfield wrote, “have ever, and I emphasize the word ever, compiled a working record such as [Young’s] in Oregon politics."

Young believed in advocating for women in all spheres of life. She told the Oregonian in 1979 that America’s tradition of voluntarism “is the strength of the country….So many people are helpless to help themselves. Those who can help should.”

Born in Detroit, Michigan, in 1904, Jean Kitts moved to Oregon with her family in 1910. She matriculated at the University of Oregon in 1922 and nearly completed a degree in Romance languages. She married attorney Frederic W. Young in 1926, and the couple settled in southeast Portland's Eastmoreland neighborhood; they had two children.

Young’s resume of public service included the Oregon Parent Teacher Association, serving as the organization’s legislative liaison from 1945 to 1949, and work on behalf of other civic organizations. She took on increasingly prominent roles in Oregon politics during the 1930s, and by 1936 was a Republican Party precinct committee member for Multnomah County. She held that position until 1967, two years after her husband's death, when she moved to King City and took a similar post.

In an era marked by women leaders in Oregon politics, including Representative Edith Green and Senator Maurine Neuberger, Young was deeply involved in the Oregon Federation of Republican Women. She served as president from 1971 to 1973 and earned the title of Republican Woman of the Year in 1969. She won Republican Party primaries—and Oregonian endorsements—in the South City [Portland] Subdistrict in 1958 and 1966.

Young represented the Republican Party on a legislative Interim Committee on Elections from 1955 to 1957 and served on the Republican State Central Committee for several years, including a six-year stint as secretary from 1954 to 1960. She was a presidential elector from 1960 onward, although not in 1964 when Goldwater was the Republican nominee for president. She served seventeen years on the King City Council (1974-1989), including eight as mayor (1981-1989).

The chair of women’s and, later, senior organizations for many political campaigns, Young was an advocate of equal pay and served on the Oregon Wage and Hour Commission during the late 1940s and 1950s, including ten years as chair. Among the committee's most notable accomplishments was the Equal Pay Act of 1955, legislation Young worked hard to advance. In the early 1970s, she was on the legislative action planning committee of the Oregon Council for Women’s Equality.

Young’s advocacy for women found its strongest expression in her work for Governor Tom McCall’s reelection campaign in 1970. She organized Women for McCall 70 as an expression of the political influence of women and to mark the fiftieth anniversary of the Nineteenth Amendment. Women’s voting turnout was better then men, but to gain true influence, Young said, women needed to “show the men of the Party that we women can do other things that count besides fold letters and lick stamps.” Over a thousand women contributed to Women for McCall 70, raising about $7,500—“not as much as we had hoped,” Young said, “but it is more than many men said we could do.” 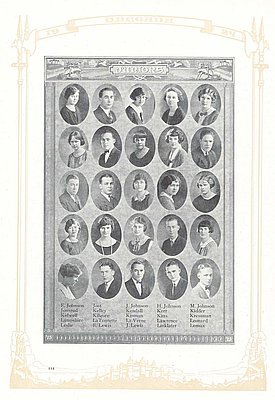 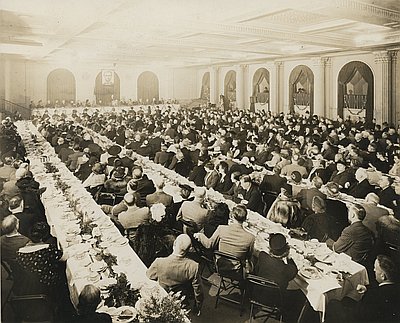 Jean Kitts, third row, second from the right, in the U. of O. yearbook Oregana, 1924
Courtesy University of Oregon Libraries

Maurine Brown Neuberger entered politics as an Oregon state legislator and, as of 2010, was Oregon’s first and only woman to serve in the United States Senate. Neuberger was an advocate for consumer rights and women’s issues, and she advanced the causes of the Democratic Party in Oregon and the …