The Trask River Wagon Toll Road may have given travelers “the most awful ride in the world”—a description taken from a passenger's account written in 1889 for McMinnville's Telephone-Register. For nearly forty years, from 1874 until 1917, the 45-mile-long, steep, narrow route over Oregon‘s Coast Range served as the transportation link and mail route for the community of Tillamook.

The growing farming community on the northern Oregon coast desperately needed a direct overland route to the Willamette Valley and Portland. A local businessman, James Quick, attempted to construct a wagon road in the early 1870s but soon ran out of funds due to the extreme terrain in the upper Trask River basin. This area of the Coast Range has narrow, rugged canyons; steep and heavily timbered slopes; and narrow ridge tops with 20 percent grades or more. Quick eventually persuaded the legislature to authorize the sale of bonds to support construction of the road, and daily use of the road began in 1874. It was operated as a toll road to raise revenue to pay back the bonds.

The valley terminus of the road was North Yamhill (the present town of Yamhill), where the road continued on to the settlement of Fairdale (near the Flying M Ranch). The road then began its steep, winding climb to the Coast Range summit near Trask Mountain before descending down steep, narrow ridge tops to the Trask River, where it followed the river into Tillamook.

It was a two-day trip for passengers on the North Yamhill and Tillamook Stage Line (a one-way ticket cost five dollars). Train service from Portland brought passengers into North Yamhill, where they caught the stage to Fairdale and spent the night. The stage departed at six in the morning and arrived in Tillamook at four in the afternoon. The trip from Tillamook included an overnight stay at the Trask House, a hotel situated at the bottom of the ascent over the mountains, with a scheduled arrival in North Yamhill at two in the afternoon.

The contract for mail delivery required daily service, which proved extremely challenging when there were heavy snows at the summit. The Summit House, a way station, was constructed near Trask Mountain to provide fresh horse teams to the stage line and to serve as a possible layover for the mail carriers during harsh winters.

Use of the Trask Toll Road was limited due to the steepness of the route and the narrowness of the road. The road could accommodate small freight wagons, and countless stock drives, individuals on foot and horseback, stage passengers, and mailbags made the 45-mile trek. Once the Pacific Rail and Navigation Company (now the Port of Tillamook Bay Railroad) began operations in 1911, the passenger and freight service on the North Yamhill and Tillamook Stage Line gradually disappeared and the mail contract was lost. The Trask House and the hotels in North Yamhill and Fairdale went out of business.

Although some portions of the toll road later served as forest access roads, most of the route has disappeared under thick growths of salmonberry, vine maple, and blackberries. 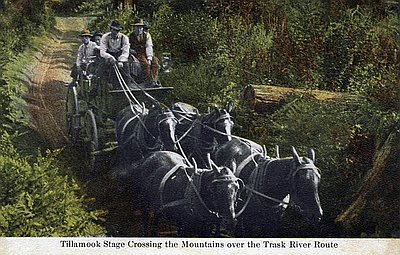 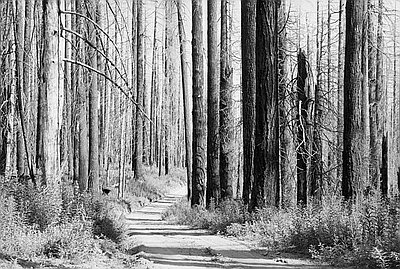 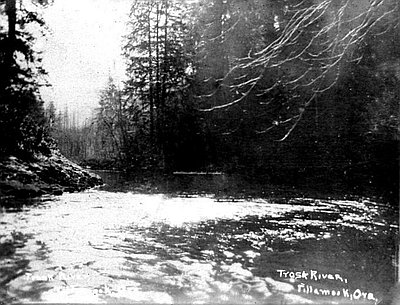