The Way West, a big-budget western film that was universally panned by critics, brought Hollywood stars to Oregon in the spring and summer of 1966. Using natural landmarks as iconic locales, the film tells a story of immigrants challenged during a wagon train crossing of the Oregon Trail. Produced by Harold Hecht and based on A.B. Guthrie’s Pulitzer Prize-winning novel, The Way West, the movie starred Kirk Douglas, Robert Mitchum, Richard Widmark, Lola Albright, and Sally Field in her motion picture debut. It was part of a resurgence of western movies made during the mid-1960s, when domestic film locations vied for Hollywood dollars with European competitors, particularly the spaghetti westerns made in Italy.

Hecht, who had produced the Academy Award-winning movies Marty (1955) and Cat Ballou (1965), purchased the rights to Guthrie’s book in 1953 and wrote the film in collaboration with Ben Maddow and Mitch Lindemann. Location scouting began in June 1965, with director Andrew McLaglen on hand to select sites for filming in central Oregon. McLaglen, a protégé of director John Ford, had filmed in Oregon before, including shooting scenes in Lane County for Shenandoah a year earlier and episodes of the television series Have Gun–Will Travel on the Deschutes River in 1960 and 1961. William H. Clothier, a two-time Oscar nominee, was McLaglen's director of photography.

The plot focuses on the personal dramas among the protagonists as they struggle across the difficult landscape of the Oregon Trail. Douglas plays Senator William Tadlock, who has become disillusioned with politics and brings his son and slave with him to create a utopian settlement in Oregon. He is joined by a guide (Mitchum) and several farming families, among them Lije Evans (Widmark) and his wife Rebecca (Albright). A series of incidents roil the group, including the murder of a Sioux Indian, a hanging, an affair, an unintended pregnancy, a deadly stampede, and a power struggle over the management of the wagon train. Just as the remaining travelers reach the western homestead, a distraught member of the group murders Tadlock for hanging her husband and flees into the high desert. The rest of the wagon train begins a new life in Oregon, living out Tadlock's unfulfilled dream in his stead.

The filming of The Way West began in June 1966 near Eugene, where set designers replicated 1840s Independence, Missouri. Using 225 extras hired by the production company, the film crew shot a scene of a wagon train crossing the McKenzie River. In early July, the production moved operations to the Bend area, where it filmed scenes at Mount Bachelor and at a replica of Fort Hall that had been built at Camp Abbot, which had been used for earlier projects.

Production soon focused on the Christmas Valley area. A daily caravan of more than seventy vehicles, including wagons, trucks, buses, and limousines—“longer by far than the biggest wagon train ever to roll on to Oregon," one newspaper reported—carried actors and crew members to locations that included Fort Rock, which doubled as Independence Rock in Wyoming, and the Christmas Valley Sand Dunes, which stood in for a desert in the Great Basin.

McLaglen’s policy of having the thirty principal actors always on the set and in costume led to exhaustion for many by the end of August, as filming continued on the Crooked River Ranch and near Smith Rock. Outside Burns, the production company filmed its last scene: a wagon train escaping into a dramatic stampede of 450 bison.

The film's publicized $6 million budget included $1 million spent in the Eugene area and $1.5 million in eastern Oregon. According to the studio's press representative, “the overhead is $25,000 a day, with 300 or more local people hired as extras and helpers….The feed bill is $10,000 a week; lodging, $12,000 or more; set construction, $150,000; salaries for 185 regulars $100,000 a week—NOT including the big stars.” The $30,000 that Oregon's tax system collected from production crew wages was controversial and led to calls for tax reform. “It's the little people,” the Oregonian’s Leverett Richards editorialized, “who do the hard work and can't afford the double bite who swear they won't work in Oregon anymore.”

United Artists released The Way West in New York City on May 24, surprising the Eugene Junior Chamber of Commerce, which had expected to host the premiere in their city. Days later, United Artists canceled plans to participate in a conciliatory Northwest premiere in Eugene on June 13, citing “adverse publicity”—principally the film’s poor reception by critics. And poorly received it was. "What they [the cast] have to go through to reach Oregon,” the New York Times reviewer harped, “is nothing to compare to what an old Western fan has to go through to keep from getting up in the middle and walking out." An Oregonian editor observed: "The reviews were not even criticisms, really, but denunciations implying that it might be the worst western ever made….On the plus side, it must be said that Oregon does look very nice in the movies.” 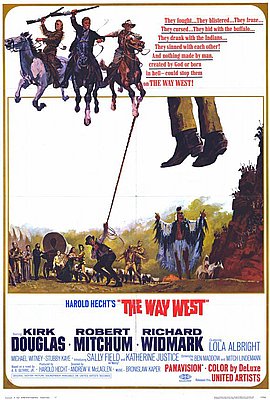 National Lampoon’s Animal House, one of the most successful American film comedies of all time, was filmed in the Eugene area in the fall of 1977. The producers needed a campus setting for their story of the disreputable Delta Tau Chi fraternity and the mayhem it creates in 1962 …

Buster Keaton's masterpiece and one of the greatest silent movies of all time was filmed in the Cottage Grove area in the summer of 1926. The General is a Civil War tale, the fictionalized account of an attempted hijacking of a Confederate train called the General by Union spies in 1862. …