National Lampoon’s Animal House, one of the most successful American film comedies of all time, was filmed in the Eugene area in the fall of 1977. The producers needed a campus setting for their story of the disreputable Delta Tau Chi fraternity and the mayhem it creates in 1962 at fictional Faber College.

After being turned down by the University of Missouri, Universal Studios approached the University of Oregon in September 1977. University President William Beaty Boyd instructed Director of University Relations Muriel Jackson to negotiate with the studio, and an agreement was signed on October 4 to allow filming on campus in return for $20,000 and a commitment that the university not be identified in the film.

Universal Studios also made agreements with two fraternities to use their houses, located just off campus in the 700 block of East 11th Avenue. The Eugene Half-way House, between the two fraternity houses, became the derelict Delta fraternity house. City officials in Cottage Grove, twenty-three miles south of Eugene, agreed to close down Main Street for three days to allow filming of the climactic homecoming parade scene.

In late October, fifty-five cast and crewmembers arrived at the Rodeway Inn in nearby Springfield. John Belushi, who was gaining fame on the television show Saturday Night Live, was the star of the film. The other well-known actor was Donald Sutherland, who had a small part as an English professor. The cast included several young actors—Karen Allen, Tom Hulce, Tim Matheson, and Kevin Bacon—some of them appearing in their first film roles. It was director John Landis’s first major Hollywood movie.

When auditions for extras were held at the university’s Erb Memorial Union on October 18, 150 men and 50 women were chosen to appear in the film, earning $2.30 an hour. The men were told to get haircuts so they would look the part of college students in 1962. The actors got haircuts at a local barbershop, after a Hollywood stylist proved inadequate.

Filming began at the Sigma Nu house on October 24, where most of the interior scenes at Delta House took place. President Boyd's office became the office of Dean Wormer, the Deltas' nemesis. The Dexter Lake Club, twenty miles east of Eugene, was the location for the "road trip" scene, where four Deltas take their dates to hear their favorite R&B group, Otis Day and the Knights.

In his limited spare time, Belushi, who played Bluto Blutarsky, made friends with Portland blues musician Curtis Salgado, who is credited with helping spark Belushi's enthusiasm for urban blues and contributing to the creation of the Blues Brothers. Belushi and his wife Judy also had dinner at the home of writer Ken Kesey, who lived in Pleasant Hill.

National Lampoon's Animal House premiered in New York City on July 24, 1978. In August, the movie had its Oregon premiere in Portland, with many of the extras from Eugene and Cottage Grove in attendance. The movie, the second most popular movie in 1978, had been made for under $3 million. It grossed $140 million in theaters in the United States and Canada.

The film spawned a new genre of uninhibited comedy films appealing to young audiences. Animal House is ranked thirty-sixth on the American Film Institute's list of the hundred greatest film comedies of all time. In 2001, it was selected by the Library of Congress for preservation in the National Film Registry.

"Delta House" was torn down in 1986 and replaced by another building. A bronze plaque near the sidewalk marks the site. The other two locations on 11th Avenue still stand. The former Sigma Nu house is now Northwest Christian University's School of Professional Studies. If you peer in the front door, you can still see the staircase where Bluto, irritated by a student singing a folk song, smashed the musician’s guitar, breaking a hole in the wall.

Over three decades ago the University of Oregon tried, unsuccessfully, to hide its participation in Animal House. Today, the film has become part of the culture of the University—a part of its brand. Movie locations are pointed out on campus tours, and Otis Day and the Knights' rendition of "Shout" is sung at Duck football games. People in Eugene and Cottage Grove take pride in having helped create a classic American comedy. 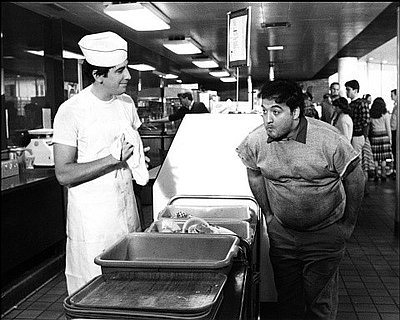 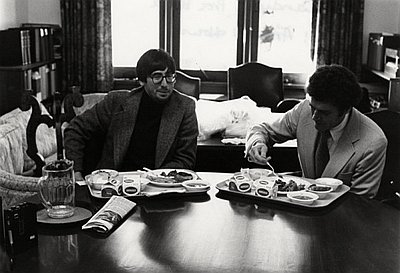 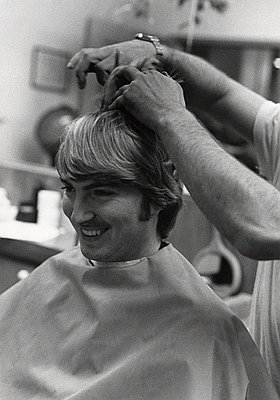 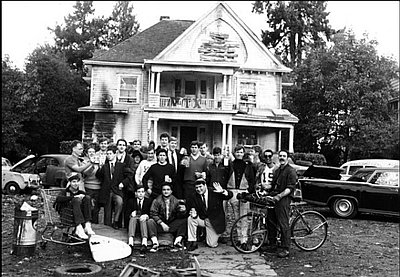 Simmons, Matty. Fat, Drunk, and Stupid: The Inside Story Behind the Making of Animal House. New York: St. Martin’s Press, 2012.

A farm boy from the Willamette Valley, Ken Kesey brought an earthy, independent spirit to the American literary scene and to his self-designated role as the young Turk of the 1960s counterculture. His literary reputation rests on two novels, both written before he was thirty. His fame (or notoriety) as …

Northwest Christian University (NCU) was founded in Eugene in 1895 by Eugene C. Sanderson, a preacher and educator in the Christian Church. He served as its first president from 1895 to 1929. The school has been known by a number of names, including Eugene Divinity School (1895-1908), Eugene Bible University (1908-1930), Eugene Bible …