The Sagebrush Symphony Orchestra of Harney County was a bright spot of musical education for rural children in southeastern Oregon in the years before World War I.

Talented music teacher and violinist Mary V. Dodge moved to Burns around 1910, and, according to student Anne Shannon Monroe, soon began playing music for local children in a tent at her husband’s engineering camp.

With funding from rancher Bill Hanley, lawyer and artist C. E. S. Wood, and Burns businessmen, Dodge purchased instruments for the children and organized them into an orchestra of thirty to thirty-five members. The children, who took turns conducting, played their first concert in Burns in 1912.

By 1915, the orchestra was touring Eastern Oregon on a Chautauqua circuit, and in September 1916, they traveled to the west side of the state. The Sagebrush Symphony Orchestra won $100 at the state fair in Salem and played several concerts in Portland, including one for the famous opera star Madame Ernestine Schumann-Heink at the Portland Hotel. Madame Schumann-Heink was reportedly impressed and planned to help the orchestra continue touring.

Unfortunately, America’s involvement in World War I interrupted plans for further tours, and the children’s orchestra disbanded when Dodge moved to Portland in 1918. In Portland, Dodge led the Irvington School Orchestra—the founding group of the Portland Junior Symphony that later became the Portland Youth Philharmonic. 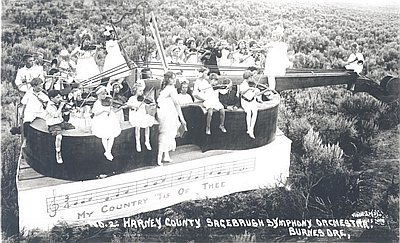 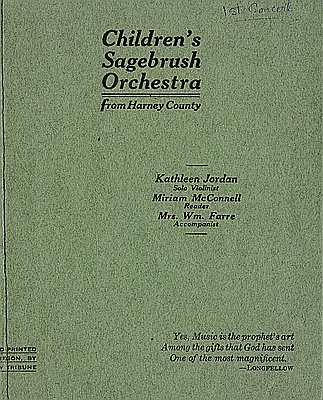