An 1874 summer camp to train Methodist Sunday school teachers seems an unlikely beginning for a cultural phenomenon that would spread across the country from Lake Chautauqua, New York, to towns such as Canby, Oregon. But rural America embraced summer Chautauquas, and communities vied for the opportunity to host the ten to twelve days of sermons, lectures, and music. Theodore Roosevelt lauded the movement as the most American thing in America, and by 1924, more than 10,000 Chautauqua assemblies were drawing estimated audiences of 30 million visitors a year.

While the Chautauqua in Canby was held only one year, in 1885, several Oregon towns flirted with the movement. Gearhart, Oregon City, Ashland, Dallas, Lebanon, Monmouth, Silverton, Albany, and La Grande all held Chautauqua camp meetings. Chautauquas in Oregon City and Ashland, both established in 1893, had the longest life and, arguably, the largest impact. The two towns benefited from an articulate, persuasive booster who led and fostered the encampments. Eva Emery Dye organized and served tirelessly as the secretary and fund-raiser for the Gladstone Chautauqua, and G.F. Billings played a similar role in Ashland, serving as president for most of the organization’s existence in Oregon.

At the Willamette Valley Chautauqua Association in Gladstone Park, a convenient eight miles from Portland, a few thousand people assembled inside a beehive-shaped wooden dome to participate in music programs and listen to prominent speakers such as three-time presidential candidate William Jennings Bryan, geologist Thomas Condon, college president and future congressman Willis Hawley, and Oregon poet Joaquin Miller. Outside, baseball and football games were played and exercise classes conducted. People pitched tents, brought from home or rented on site, to pitch in the nearby park woods. Admission prices were kept as low as possible to encourage families to attend.

The Southern Oregon Chautauqua Association’s first beehive dome was constructed in a week and a half, finished just one day before its July 1893 opening. To increase seating capacity during the Chautauqua’s thirty-one-year run in Ashland, the dome was rebuilt twice. Tents could be rented at Ashland’s Chautauqua Park, and horses could be left at a nearby livery stable. People attended classes in the morning and watched various forms of entertainment in the evenings. Speakers included evangelist Billy Sunday, John Philip Sousa and his band, educator Booker T. Washington, politician William Howard Taft, William Jennings Bryan, and poet Joaquin Miller.

The demise of Chautauqua in the late 1920s at both Gladstone and Ashland has been attributed to competition from movie houses, radio, and the automobile. With declining attendance, financial deficits in both programs were impossible to overcome. The Gladstone grounds were sold in 1929 to a church group. Ashland’s dome, vacated and with its mortgage in foreclosure, was left sagging dangerously until it was removed in 1933. In 1935, the remaining cement walls became the site of the first Oregon Shakespeare Festival. 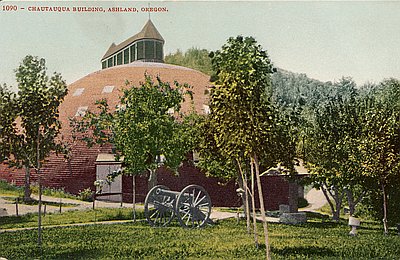 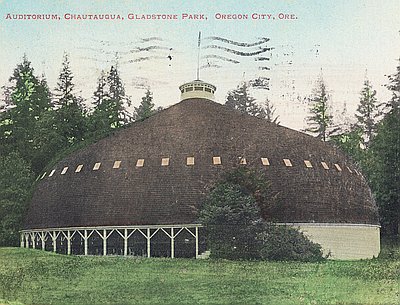 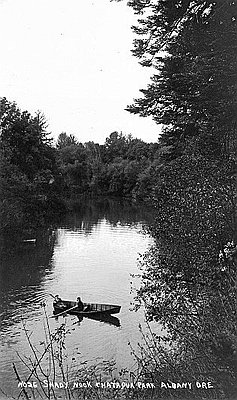