Portland State University (PSU) becomes a pre-college institution every first Saturday in May, when a thousand children, grades four through twelve, descend on the campus to practice and celebrate writing. They come from all parts of Oregon, bringing a sample of their best writing as their admission ticket.

The festival was held at the University of Oregon from 1985 to 1989. Since then, it has been at Portland State, whose Graduate School of Education now co-sponsors the event with the Oregon Council of Teachers of English. The festival celebrated its twenty-fifth anniversary in 2009, making it one of the longest-running writing festivals for students in the United States.

Norah Palmer, who had attended four festivals while in elementary and middle school, wanted her "writing-prone peers at Gladstone High School to have this same wonderful opportunity" and sought permission for them to attend. Long-time Pendleton High School teacher John Scanlan wrote: "The OWF is a life-changing event for students, especially those from rural areas who feel isolated until they meet all these other young people with whom they share so much. My students have returned and conducted their own writing workshops for peers and for children in Pendleton elementary schools." Rebecca Phinney from Umatilla County attended five times, "taking away more from each experience. The first time I was too shy to read my own story; now I'm the first to volunteer, eager to share raw, just-written drafts. I'm looking forward to returning to the OWF as a teacher." 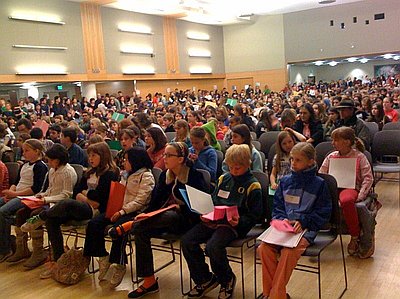