Albert Patecky was a Portland painter and printmaker who created works on both sides of the divide that separated traditional and modern artists in the mid-twentieth century Pacific Northwest. Adept at conventional landscapes and marines, he also created works of extreme abstraction and was thus a pioneer of totally nonrepresentational art in Oregon.

Born in Mancelona, Michigan, the son of parents from Bohemia (later Czechoslovakia), Albert Patecky moved with his family to Chicago, where he took drafting courses at a technical high school. In 1925, at the age of eighteen, he enrolled at the Chicago Academy of Fine Arts, where he studied for three years. In 1928, the family moved to Portland.

In 1930, Patecky met and married Blanche Friend, an artist and musician. While working as an illustrator for Pacific Telephone and Telegraph, he continued his art education by taking a drawing class with Harry Wentz at the Museum Art School in 1931 and studying with such key figures of the Portland art scene as Sidney Bell, Peter Sheffers, William Givler, and Charles Voorhies. By the early 1940s, Patecky was known for his straightforward paintings of scenery, buildings, and figures.

Patecky attempted to enlist in the armed services as a camouflage artist during World War II but was rejected because of his age and the fact that the telephone company for which he worked was deemed a critical industry. In 1945, in his late thirties, he decided to devote himself to the fine arts; to this end, he studied for three months at the Art Students League in New York. There, he encountered the modern art movements of Cubism, Fauvism, and Expressionism. At the Museum of Non-Objective Painting, the forerunner of the Solomon R. Guggenheim Museum, he was particularly attracted to the art of Wassily Kandinsky (1866-1944), the Russian-born founder of the German Expressionist movement Der Blaue Reiter and the pioneer of nonrepresentational painting devoid of recognizable subject matter.

Patecky was particularly interested in the clear, geometric forms that characterized Kandinsky’s work of the 1930s and in the analogy Kandinsky drew between painting and music. Back home in Portland, working day jobs and creating art at night, Patecky reevaluated his approach to art-making and began to experiment with his own nonrepresentational compositions. He sent some of these to Hilla Rebay, the director of the Museum of Non-Objective Painting, and in 1949 she began to display his work at the museum and in international exhibitions.

Patecky’s abstractions, which also draw on “automatist” Surrealism (especially the work of Joan Miró), provided him with new ways to use his skills in design and composition. They reflect the sleek modernity of commercial and industrial design of the mid-twentieth century. Together with Maude Kerns, the Eugene artist who also exhibited at the Museum of Non-Objective Painting, he helped viewers in the Pacific Northwest develop an appreciation for art that relied exclusively on the arrangement of formal elements.  At the same time, he continued to create figurative work, which sold more readily than his abstractions.

In 1961, the Pateckys and their son, the sculptor Kenneth Patecky, built a studio in Tigard for creating their own artwork, as well as teaching art classes. The studio remains intact and contains artworks by the Pateckys and an archive of materials related to their careers. In 1983, the Oregon Historical Society presented the retrospective exhibition The Artists Patecky: A Place in History, curated by Jack Cleaver.

Patecky’s paintings are in Portland private collections and at the Oregon Historical Society, Jordan Schnitzer Museum of Art (University of Oregon), and Hallie Ford Museum of Art (Willamette University), which organized the exhibition Albert Patecky: Abstractions in 2005. 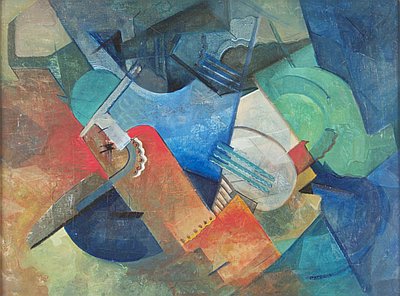