The Oregon Supreme Court Building, at the corner of State and 12th Street Southeast in Salem, is the oldest government building on the Capitol Mall. Completed in 1914, the three-story structure houses the Appellate Court Records Section on the first floor and the State of Oregon Law Library on the second. The Oregon Supreme Court and the Oregon Court of Appeals share the courtroom on the third floor, where the justices' individual chambers are also located. The smallest office, known as the "broom closet," is traditionally assigned to the newest justice.

Between 1852 and 1914, Oregon’s highest court assembled in several buildings, including the third floor of the 1876 Oregon State Capitol Building that was destroyed by fire in 1935. In 1911, State Senator John A. Carson introduced a bill to add a wing to the Capitol to accommodate the Supreme Court. The bill was amended to provide funding for construction of a separate building that would house the Supreme Court, the Attorney General’s Office, the State Printing Plant, the Oregon State Law Library, and the Oregon Library Commission (the present-day State Library of Oregon). Total cost for the building was $320,000.

William Christmas Knighton, Oregon’s first official state architect, designed the building in the Beaux Arts style and oversaw its construction. The characteristically flat-topped exterior, which is covered in white glazed terracotta tiles with contrasting green tiles, features Ionic columns and numerous architectural ornaments, including medallions, rosettes, swags, cornucopias, shields, and brackets. Above the cornice in the center of the north and south sides, bald eagles from the Great Seal of the United States surmount inscriptions in Roman-inspired lettering that read “Supreme Court of the State of Oregon.”

The interior passageways feature three types of marble: Alaska marble for the floor, verde antico for the base molding, and Striped Brocadillo from Vermont for the wainscoting. An ornate winding staircase with Philippine mahogany trim rises steeply from the center of the building to the upper stories. The second-story law library features Ionic pillars and other classicizing architectural moldings and ornaments.

Above the entrance to the courtroom on the third floor is an Arts and Crafts-style stained-glass window with the inscription “Supreme Court.” The courtroom has a similarly styled stained-glass ceiling, with the State Seal of Oregon as its central motif. Designed by the Povey Brothers Studio in Portland, the ceiling was damaged during the 1962 Columbus Day Storm but was restored using many of the original pieces.

Between 1981 and 2002, the courtroom and the library underwent renovations and upgrades. Historic preservation was an important goal of the project, which entailed reinforcing the stained-glass ceiling, replacing the golden Italian silk fabric on the walls, and laying carpet that replicated the original hand-painted pattern. Further preservation efforts were undertaken between 2014 and 2016, including the replacement of windows and terracotta tile on the exterior, seismic retrofitting, and upgrades to internal systems.

The original furnishings in the courtroom include the bench where the seven justices sit (the court was expanded to seven justices in 1913). Over the years, many notes have been penciled on the bottom of the drawers. One note, in a drawer at the Chief Justice’s desk, reads “February 14, 1914. This building first occupied by the Supreme Court,” followed by a list of the justices and officers of the court at the time. Since then, the names or initials of nearly every justice to serve the court have been added.

Suo, Steve. "Oregon Supreme Court is Robed in Tradition-Bound World of Its Own." The Oregonian (December 3, 1995). 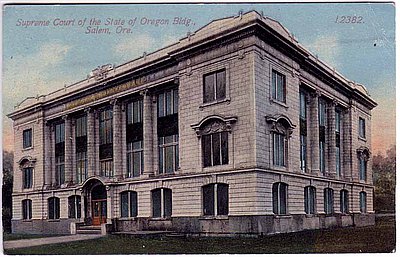 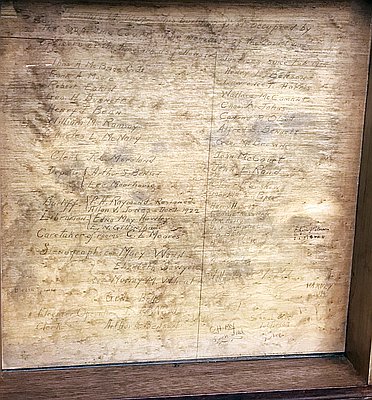 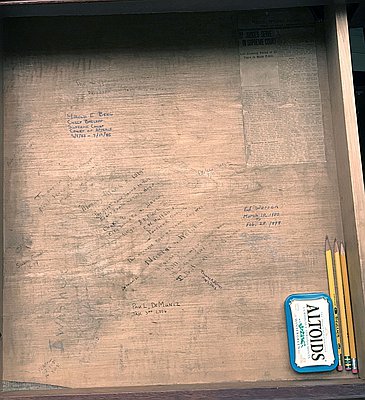 Among capitol buildings in the United States, the Oregon State Capitol in Salem is a landmark of Modernistic design. Like most other statehouses, it was symmetrically organized in the tradition of Classically inspired architecture, but it was stripped down to its essential form and detailed with utmost simplicity. Oregon’s Capitol …

For years after achieving statehood in 1859, Oregon was deprived of a proper capitol due to controversy over fixing the seat of government in Salem. The Classical Revival territorial capitol had burned under suspicious circumstances in 1855; thereafter, legislators assembled in rented rooms in commercial buildings in Salem’s downtown. …