Throughout its history, the Oregon Statesman has been a chronicler of Oregon politics. In its earliest years, the newspaper literally followed Oregon’s government, as it moved from Oregon City to Salem in 1853, to Corvallis in 1855, and then to its final location in Salem later that year.

The Statesman was founded in 1851 by Samuel R. Thurston, Oregon's delegate to Congress, as a Democratic response to the Whig Oregonian, which began publication in 1850. Asahel Bush, Thurston's editor, became the owner when Thurston died in April 1851. Bush was leader of the Salem Clique, which dominated Democratic politics during territorial and early statehood days. In the style of the day, Bush was abusive and outspoken in criticizing rival editors and is given credit, along with Oregonian editor Thomas J. Dryer, for creating the Oregon Style, a particularly virulent form of editorial rivalry.

When the approach of the Civil War split the Democratic Party, Bush sided with the Union. The split hurt the Statesman’s standing as a political power, and Bush left the paper in 1863. The paper had a series of owners and in 1867 was published as the Daily Unionist. In 1869, Samuel A. Clarke purchased the Unionist and in 1870 re-named it the Oregon Statesman. He sold the paper in 1872, and a succession of owners followed.

R.J. Hendricks, a Republican and an experienced newsman, bought the paper in 1884. He upgraded the Statesman's content and its equipment and ran the newspaper until 1929, when he sold it to Charles A. Sprague (with one-third ownership held by Sheldon Sackett). At the time, all state agencies and institutions were headquartered in Salem, and the city was surrounded by farmland. The climate was ideal for Sprague, who had published a newspaper in Ritzville, Washington, and had been a minority partner in the Corvallis Gazette-Times.

Sprague plunged into politics and quickly gained a reputation as a moderate Republican voice. He was an upset winner for governor in 1938, a moderate Republican capitalizing on a split in the Democratic Party. While Sprague was in office, the Statesman was run by editor Ralph Curtis and business manager Wendell Wilmarth. Sprague returned to the paper after losing his bid for re-election in 1942 and set about making it more competitive with the afternoon Capital-Journal. In 1953, Salem’s two newspapers agreed to share business and production facilities but to maintain separate news and editorial functions.

When Sprague died in 1969, his son Wallace attempted to operate the newspaper from his home in New York in an uneasy partnership with the Capital-Journal. In 1973, owners of the two papers sold to Gannett, at that time the nation’s largest newspaper chain, ending 122 years of local ownership in Salem. In 1980, the Statesman and Capital-Journal merged as a morning newspaper, the Statesman-Journal. Its circulation at the end of 2018 was 27, 859 on Monday, Tuesday, and Thursday, 33,815 on Wednesday, and 36,323, Sunday. 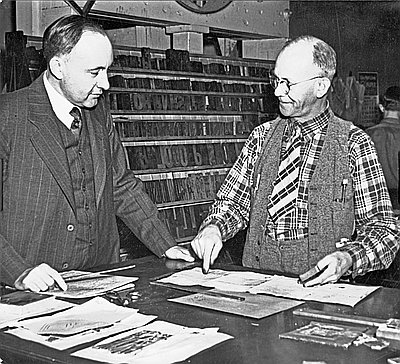 McKay, Floyd J. An Editor for Oregon: Charles A. Sprague and the Politics of Change. Corvallis: Oregon State University Press, 1998.