Oregon’s state song, “Oregon, My Oregon,” was composed by Henry B. Murtagh with lyrics by John Andrew Buchanan. Published in December 1920, it is a general paean to Oregon's scenic beauty and a tribute to the state's EuroAmerican settlers. The Oregon legislature designated “Oregon, My Oregon” as the state song in 1927, and the lyrics and song have been generally included in public school instruction about Oregon history.

In 1918, the Society of Oregon Composers embarked on a campaign to create a state song to join two already designated state symbols, the state seal (1859) and the state flower (1899). The custom of adopting a state song had a flowering during the 1910s and 1920s, following a similar trend to name state flowers in the 1890s and early 1900s. Such symbols were often adopted through a school or public contest and were usually subsequently endorsed by the state legislature.

The Society of Oregon Composers solicited citizens to submit a verse for a state song by January 31, 1919. The chosen text would then be set to music supplied by a Society composer. The 212 submissions were reviewed by a committee of five: Alta Smith, a former teacher and an advocate of women’s rights who was married to Portland businessman Elliott R. Corbett; Mabel Holmes Parsons, a poet, artist, and writing instructor for the University of Oregon; J. A. Churchill, the state superintendent of schools; Norman F. Coleman, a professor of English at Reed College; and Hopkin Jenkins, the principal of Jefferson High School in Portland.

Submissions came from throughout the state and included one from novelist Eva Emery Dye.  Popular motifs were the state’s scenic grandeur; its agricultural bounty (several contributors noted the current fad for loganberries); merchant sailor Robert Gray, captain of the Columbia Rediviva; expedition leaders Meriwether Lewis and William Clark; pioneer settlers of the 1840s and 1850s; Natives, typically depicted as vanished adversaries; and World War I.

The committee winnowed the entries to three, which were distributed to Society members, who set them to music in a separate contest. The winning combination, “Oregon, My Oregon,” was composed by Murtagh with lyrics by Buchanan, whose original three-verse poem was reduced to two. Other composers provided choral arrangements.

Henry B. Murtagh was an organist and composer who played for silent movies at the Liberty Theatre in Portland. John Buchanan was a Roseburg attorney and state representative (1909 and 1911) and served in the Oregon Coast Artillery at Fort Stevens during World War I. He and his family moved to Astoria after the war, where he practiced law and was a municipal court judge. He was well known for his interest in Pacific Northwest history and wrote poetry and essays published in magazines such as Sunset and Field and Stream. His poems are marked by tropes that include natural beauty, patriotism, Indian legends, religion, and the Industrial Age.

The text of “Oregon, My Oregon” is a short catalog of regional beauties and virtues, typical of such booster songs. In recent years, some of its phrases have been criticized as denigrating Oregon Indians and being disproportionately laudatory of the state’s white male citizenry. The lyrics include references to “empire builders,” which suggests colonial rule; to lands “conquered and held,” which emphasizes colonial usurpation; to “free men, fairest and the best,” which can be read as light-haired and racially superior in a state notorious for excluding Black residents, but may also be a reference to fairness and an easy rhyme with West; and “blest by the blood of martyrs,” a phrase that does indeed call to mind whites killed in violent conflicts with Native people.

Buchanan’s overall tone is blandly celebratory of human striving and nature’s beauty, and the colonial sentiments in the song are broadly reflective of attitudes and values that were common among many white Oregonians when it was written. Both legislators and activists have advocated for adopting a new state song (a failed attempt was made in 2017), and Oregon could commission a new one and designate "Oregon, My Oregon" a retired or emeritus song—an approach that several states have taken.

Land of the Empire Builders, Land of the Golden West;
Conquered and held by free men, Fairest and the best.
Onward and upward ever, Forward and on, and on;
Hail to thee Land of Heroes, My Oregon.

Land of the rose and sunshine, Land of the summer’s breeze;
Laden with health and vigor, Fresh from the western seas.
Blest by the blood of martyrs, Land of the setting sun;
Hail to thee, Land of Promise, My Oregon. 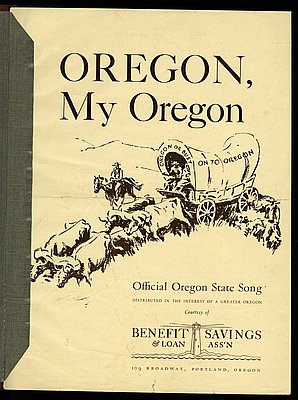 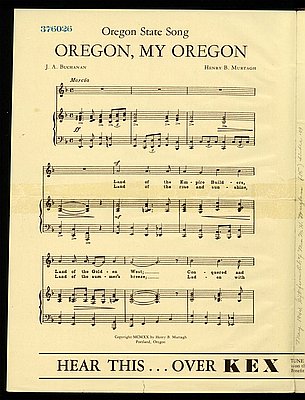 The American Beaver (Castor canadensis) is often called “nature’s engineer” because of its practice of building dams in streams and rivers. Nearly wiped out in much of their historic range by early fur trappers, beavers have been restored to many Oregon waters because of improved management, awareness …

Hazelnuts, also called filberts, have provided food for Indigenous peoples in the Northern Hemisphere since the glacial age. Two varieties are important to Oregon. Corylus Cornuta var. californica grows wild in the state and is now planted for erosion control and wildlife habitat. C. avellana L., which settlers brought to Oregon …

Oregon grape is a common name for members of the barberry family, Berberidaceae. The six native species of the plant are widely distributed through Oregon in a variety of habitats on both sides of the Cascade Mountains to the coast and in the northeastern part of the state. Some species …

Oregon is the only state in the country whose flag has a different image on each side. It was also among the last states to adopt a flag, only doing so in 1925 after Portland’s postmaster, J.M. Jones, asked for a flag to present to the U.S. Post Office Department …

On a fence post in Wheeler County, a sandy brown bird delivers a rich song, beginning with loud, clear, flute-like notes followed by a jumble of sweet notes. The stocky, robin-sized bird turns, revealing the yellow breast marked with a bold black “V” identifying it as a western meadowlark ( …