Oregon grape is a common name for members of the barberry family, Berberidaceae. The six native species of the plant are widely distributed through Oregon in a variety of habitats on both sides of the Cascade Mountains to the coast and in the northeastern part of the state. Some species grow in sunny or shade sites in moist, well-drained soil; others prefer dry, well-drained sites. They are shade tolerant and often are understory shrubs in coniferous forests. Oregon grape plays an important role in plant communities, where they serve as cover for small animals and food for fruit-eating mammals and birds. Three exotic species occasionally escape from cultivation.

The height of the plant varies from mid-calf to head high. All possess dark green, pinnately compound evergreen leaves with five to fifteen holly-like leaflets per leaf. In the spring, they have masses of yellow flowers that later produce clusters of dark purple berries covered with a wax bloom, the reason for its common name. One species of Oregon grape, Berberis aquifolium, was designated the state flower by the Oregon legislature in 1899.

Botanists have placed Oregon grape in either the genus Berberis, the Arabic name for a North African species, or Mahonia, honoring Bernard McMahon, an American horticulturalist who died in 1816. Today, most botanists consider Berberis the correct genus for the Oregon species.

Native Americans used concoctions, decoctions, and infusions of Oregon grape plant parts to treat a wide variety of human aliments, including syphilis, arthritis, and itchy eyes. Some people noticed that consuming the fruit caused diarrhea, while others reported that the fruit was an excellent laxative. Native Americans used the yellow roots or bark to make a yellow dye to color baskets, wool, or porcupine quills; it is still used today as a natural dye for wool.

Native people ate the sour fruits fresh in small quantities or dried them in the absence of other fruit; others made preserves or jelly. Modern jelly-makers collect ripe Oregon grape fruits, then extract the juice by squeezing the berries through a muslin bag to separate the skins and seeds from the juice. If enough pectin and sugar is added, the resulting jelly has the color of clean motor oil and is not unpleasant tasting. Wine also is made from the juice.

Berberine has other uses as well. It has found some favor in more traditional medicine and is used as an antifungal agent, an antibiotic, and an anti-inflammatory. Newer experimental uses include the treatment of some medical conditions, including diabetes mellitus, elevated blood lipids, certain liver aliments, congestive heart failure, intestinal problems, mental health, and some cancers.

The floral industry harvests Oregon grape as background greenery in flower arrangements. Oregon grape is also used as an ornamental garden plant because of its attractive foliage, flowers, and fruit. 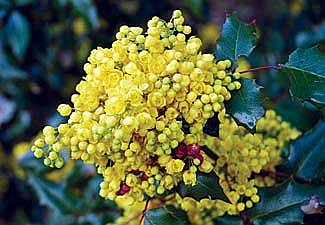 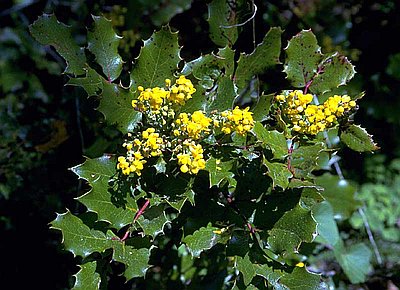