The lure of gold brought miners to the North Fork as early as 1855. Active mining of the gravel and sands of the river and its tributaries, using a process known as placer mining, began in earnest in 1861 at places such as Otter Bar (near Dale) and above Desolation Creek. Larger-scale placer and lode mining in the 1880s lasted into the 1950s, and one study suggests that the North Fork produced nearly two million dollars in gold by 1914. Placer mining significantly changed the river’s fabric and flow, displacing two to three million cubic yards of river deposits through the use of dredges, draglines, flumes, and floating wash plants. Mining continues on a small scale on the North Fork through recreational panning, handwork, small-scale placer exploration, and small suction dredges. Remnants of the river’s mining past can be seen in abandoned cabins and mounds of tailings piles.

Establishment of the 121,800-acre North Fork John Day Wilderness in 1984 protected key sections of the river’s headwaters and drainage. In 1988, Congress passed the Omnibus Oregon Wild and Scenic Rivers Act, which designated almost half of the North Fork as wild and scenic. That same year, Oregon Ballot Measure 7, the Oregon Rivers Initiative, designated a section of the North Fork, from Big Creek to Monument, as an Oregon State Scenic Waterway.

The North Fork is designated a national wild and scenic river for 54.1 miles, from its headwaters in the Baldy Creek Unit of the North Fork John Day Wilderness to its confluence with Camas Creek, west of Dale. It possesses all three national wild and scenic river classifications: wild, scenic, and recreational. The first 3.5 miles of the river is classified as wild, followed by 7.5 miles classified as recreational, as the river bends west. At Trail Creek, the river returns to wild status for 24.3 miles, carving a broad loop through the heart of the wilderness along the North Fork John Day Trail Hiking Trail. At Big Creek, the classification changes to scenic for 10.5 miles to Texas Bar Creek, and the 8.3-mile stretch to Camas Creek is classified as recreational. Between Camas Creek and Monument, the Middle Fork enters the river, and the adjacent landscape transitions to open ponderosa pine forest, to savannah, to high desert sage and juniper ranchland, continuing to its confluence with the John Day River near Kimberly.

The U.S. Forest Service, through the Umatilla and Wallowa–Whitman National Forests, manages the river’s wild and scenic portions and adjacent forest and wilderness areas, and the Bureau of Land Management provides camping opportunities and boating access on the lower river. Popular recreational activities on the North Fork include fishing, floating, camping, hiking, and recreational gold panning. On the North Fork John Day Trail, near the river’s confluence with Trout Creek, sits the Home Mines Cabin, featured as the Bigfoot Hilton in William L. Sullivan’s account of his solo backpacking trek across Oregon, Listening for Coyote. 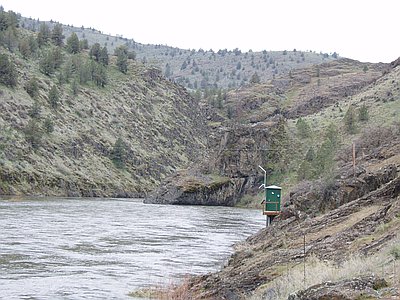 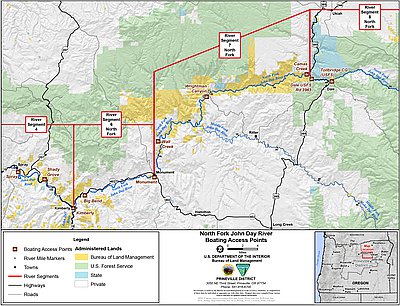 From its headwaters in the fir and ponderosa pine forests of Grant and Harney Counties, the South Fork John Day River flows northward for about sixty miles to the river’s main stem near Dayville, carving a corridor through the rocky basalt, rangeland, and western juniper woodland of the far south …