Mt. Angel, a Willamette Valley community largely composed of descendants of German and Swiss immigrants, held its first Oktoberfest in late September 1966. By the mid-1980s, the annual event had become the largest folk festival of its kind in the Pacific Northwest, drawing more than 300,000 visitors a year.

Oktoberfest in Mt. Angel is a volunteer effort by community members that is managed by Oktoberfest, Inc., a nonprofit corporation with an elected board of seventeen people. The town modeled the event on the Bavarian celebration that has been held each autumn in Germany since 1810. Many of those who attend the Mt. Angel festival wear Bavarian-inspired attire, and local businesses and booths sponsored by organizations offer traditional foods from the Bavarian and Alpine regions of Germany.

The first Oktoberfest in Mt. Angel was on Main and Palmer Streets, with the biergarten under a portable tent and storefronts decorated in a Bavarian motif. The town opened the 20,000-square-foot Oktoberfest Community Building in 1971 and built a permanent bandstand in 1982. After a five-year community effort to raise funds and a collaboration with Marion County officials, a forty-nine-foot-high Glockenspiel was built in 2006 at the corner of Garfield and Charles Streets; it is the tallest Glockenspiel in the United States. Each year, the town builds a Fruchtsaeule, a twenty-foot-tall obelisk endowed with harvested fruits and vegetables.

In 1966, when Mt. Angel had about 1,700 residents, Oktoberfest drew about 39,000 attendees. By 1973, more than 200,000 people attended the festival, and attendance reached 375,000 in 1989. Organizers charge a nominal entrance fee for some events and for the biergarten and weingarten, but there is no admission charge to the festival.

The festival always has been a family event. The first Oktoberfest featured arts and crafts exhibits, an automobile race sponsored by the Porsche Club of America, a performance by the Bavarian Dancers of Portland, and a bicycle race. In the early 1970s, the kindergarten area featured the Candyland Circus, animal trainer Johnny Delp, and the Hansel and Gretel Players. In 1996, organizers set up a farmers market at St. Mary’s School, and community dinners have served as many as 20,000 meals of sausage and sauerkraut each year since 2000.

The festival raises tens of thousands of dollars each year for local causes, including the library, fire department, nursing homes, and high schools. In 1977, for example, Oktoberfest, Inc., disbursed more than $15,000 to area charities, and nonprofit groups operating booths earned an additional $60,000. By 1982, the Mt. Angel Festival Committee had donated about $300,000 over sixteen years; in 1993 alone, the Oktoberfest donated $125,000.

Oktoberfest organizers sometimes make their facilities available for special causes. In April 1975, for instance, the Oktoberfest beer hall served as a temporary shelter for about 170 orphans and adults evacuated from South Vietnam.

Mt. Angel’s success has spurred many emulators. In 1976, organizers at Portland’s Central Catholic High School staged their first Oktoberfest in Holladay Park. Beginning in the late 1970s, the St. Joseph Catholic Church of Vancouver, Washington, held an Oktoberfest, and the community of Silverton held a Christmas-themed Decemberfest. In 1998, the residents of Sandy began their own Oktoberfest.

The festival’s resonance in Oregon extends in other areas as well. In 1979, the Bank of Oregon recognized the financial returns possible by using historical themes in their marketing, with direct reference to the success of the Mt. Angel Oktoberfest. In 1998, the now-defunct Nor’Wester Brewing Company of Lake Oswego produced a Mt. Angel Oktoberfest Lager. 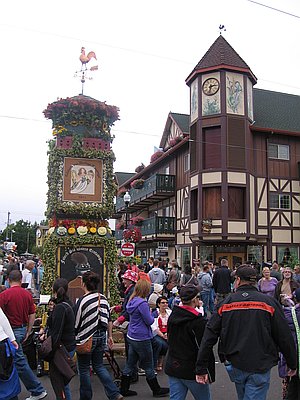 Mt. Angel is a small community of about 3,700 people approximately eighteen miles northeast of Salem. Indians had worshipped on the butte, called Tapalamaho, for generations, traveling from Klamath country to the southeast and from east of the Cascades. The first white settlers in the area included William and Jane …