Joni Luann Huntley was born in McMinnville and raised in Sheridan, Oregon, where she attended public schools. By age nine, she was competing in track and field events, with strong support from her family but no formal coaching. Both her older brother and younger sister were competitive athletes at the state level, and Huntley excelled in long jump, high jump, the 100-yard dash, and hurdles. She set the Oregon high school women’s record high jump in 1974 by clearing 6 feet.

In 1974, Huntley won the Bill Hayward Athlete of the Year Award, honoring her as Oregon’s outstanding amateur athlete of the year (the third woman to win the award), and the Johnny Carpenter Award for High School Athlete of the Year. She was the first athlete to win both awards in the same year. Her success occurred during the early days of Title IX of the Civil Rights Act, which prohibits educational programs that receive federal funding from discriminating on the basis of sex. Title IX became law in June 1972, and Huntley was among the first women it protected.

Despite holding the national high jump record in high school, no college or university offered Huntley an athletic scholarship until booster groups at Oregon State University were persuaded to support her. She was the first female athlete to receive an athletic scholarship at the university, and one of the first to use the all-male track facilities. She set an OSU high jump record of 6 feet 2 3/4 inches, which still stands. She also attended Long Beach State in California in order to work with Olympic assistant coach Dave Rodda. Huntley jumped in two Olympics games, finishing fifth in Montreal in 1976 and third in Los Angeles in 1984; she trained for the 1980 games in Moscow, which the United States boycotted. She was later inducted into the OSU Hall of Fame (1988), and the Oregon Sports Hall of Fame (1990).

In the 1970s, sportswriters routinely commented on Huntley’s looks, often mentioning her red hair, describing her as “pretty,” and sometimes making quips about “Women’s Lib” or the days when “women still were content to be women.” Leo Davis, writing in the Oregonian on February 4, 1975, explicitly struggled with how to describe her without using the word “pretty” while admitting that to do so “denigrates her achievements.”

Huntley married John Rueter; they have two daughters. Despite having qualified for the National Championships in 1987, she left competitive track when her older daughter was a baby. “That's when I quit,” Huntley told the Corvallis Gazette-Times in 2003. “The baby was crying in the stands and I had just made finals and I decided it was time to go home. Preliminaries were one day, the finals the next. Times changed and it was time to move on.”

After earning a master’s degree in teaching at Oregon State (where she also served as an assistant track and field coach), Huntley spent her professional career as a kindergarten teacher in the Portland Public Schools and as a coach, including leading workshops for young athletes and coaching for the Portland Track Club. She is now retired and lives in the Portland Metro area. 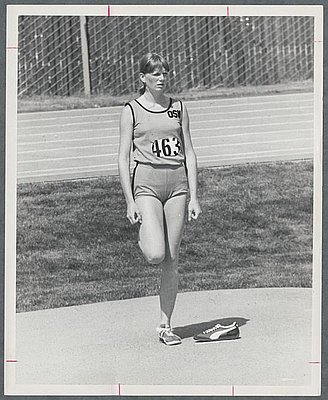 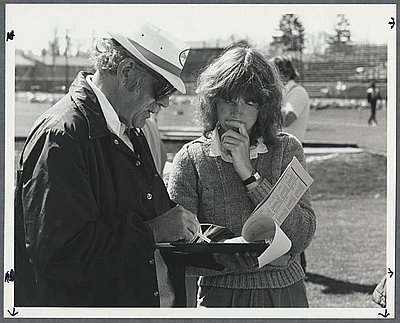 Democrat Edith Starrett Green represented Oregon’s 3rd Congressional District from 1955 through 1974. During her twenty years in the U.S. House of Representatives, she gained a national reputation for her leadership in shaping federal education policy and her advocacy for equal rights for women. She was known for her independence, …