The Four Rivers Cultural Center in Ontario is a nonprofit organization dedicated to telling the history of the western Treasure Valley. “Four Rivers” refers to the Snake, Malheur, Owyhee, and Payette Rivers, which converge in Ontario and provide water critical to farming, a mainstay of the region’s economy. The Center hosts exhibits and events in an 85,000-square-foot facility, which includes a museum, a Japanese garden, the Meyer McLean Performing Arts Theater, and the Harano Gallery.

The Center’s mission statement—“culture and diversity are part of a healthy community”—reflects its primary goal, described by Executive Director Matthew Stringer in 2017, to “highlight all of these cultures to insure that all people are aware of all of them and that we stay united as a community.” Exhibits, events, community conversations, and discourse often focus on social justice and include topics that include why place matters, agricultural gene modification, and topics such as “Oregon: A History of Barriers & Structural Racism.”

The Center was initially envisioned in the late 1980s as a Japanese American Cultural Center that would “offer educational and cultural opportunities through visual and performing arts, study of Constitutional violations and the understanding of the history and service of Japanese Americans.” The project received $4 million from the United States Defense Fund in 1990 and an additional $4 million from state and local sources. At about the time that ground was broken for the Center, the Japanese American community suggested a name change that would broaden the mission to add Northern Paiutes, Europeans, Basques (separated from Europeans because of their large numbers in the region), and Braceros. The Four Rivers Cultural Center, which eventually cost $10 million, opened in 1997 on land donated by Treasure Valley Community College.

Northern Paiutes are represented in the museum through the collection of Horace Arment (1902–1980), who grew up on the Snake River. He was the director of the Federal Employment Service office in 1943, when Japanese Americans moved to the valley. He was also a local historian and author, a member of the Oregon Geographic Names Board, and a collector of Native American artifacts. Dioramas of Northern Paiute life in this section of the museum were created by Andrew Whiteman, later a designer at the Burke Museum in Seattle.

Basques began to immigrate to the Treasure Valley at the turn of the twentieth century, and a significant number of their descendants remained in the Ontario area. By 1940, 1.4 percent of Ontario residents identified themselves as Amerikanuak, or of Basque ancestry. Exhibits such as “Hidden in Plain Sight: The Basques” have documented the region’s Basque heritage, and the Center hosts an annual Basque dinner, dance, and auction.

The Center honors the Bracero culture in exhibits, folkloric ballet performances, and celebrations of Mexican Independence Day and Day of the Dead. Braceros came to the Treasure Valley during World War II when the federal government hired farm laborers from Mexico to replace local workers who had joined the military. The 2018 census estimates that 43 percent of the Ontario population is Hispanic and Latinx.

The 1.3-acre Hikaru Mizu Japanese Garden, curated by Michael Miller, was dedicated as a memorial to Japanese Americans incarcerated during World War II and to those who served in the military. Hikaru Mizu translates as “shining water” and relates to the name Ontario, which means “shining water” in Iroquois. When President Franklin Roosevelt signed Executive Order 9066 in 1942, forcibly removing Japanese and Japanese Americans from coastal cities, Ontario already had a sizable Japanese American community, a result of labor needed by railroads and dam-building. A work camp for prisoners was established in Treasure Valley at Nyssa, twelve miles south of Ontario, and many of them stayed in the area after the war. Until 1990, Ontario had the largest percentage of Japanese Americans of any community in Oregon. Theater performances focusing on Japanese culture include Taiko and classical Japanese musicians and dance.

The Harano Gallery is named for Frank Harano, a professional photographer in Ontario from 1948 to 1980, and his wife Betty. Harano’s family donated his extensive library of negatives to the Center. Exhibits in the gallery feature the work of a variety of photographers, including Dorothea Lange.

The Center’s annual music festival, “Live After Five in the Garden,” attracts five hundred people at each concert through the summer. Since 2013, the Four Rivers Community Theatre program has produced four plays each year for students in the Meyer McLean Performing Arts Theater, giving many children their first opportunity to experience live theater.

In 2017-2018, the center replaced the theater stage, installed a new audio-visual system throughout the facility, and made improvements to the Japanese garden, among other renovations. As of 2016, the organization serves nearly 100,000 people a year. 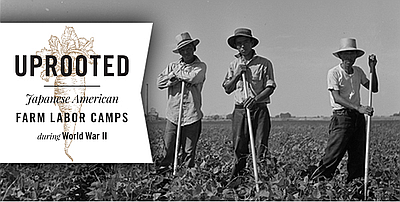 Barnard, Jeff. “Oregon Town was a Haven during WWII: Northwest: Hundreds of Japanese Americans were evicted from the West Coast amid wartime hysteria. But this farming town welcomed them.” Los Angeles Times, August 29, 1993.

Ontario, the largest city in Malheur County, is on the Snake River near the Oregon state line. As the first city that people encounter when crossing into Oregon from Idaho on Interstate 84, Ontario has adopted the slogan "Where Oregon Begins."

Although Oregon Trail pioneers crossed the Snake River about fifteen …

The Oregon Plan, implemented in May 1942, led to the organization of the first Japanese American farm labor camp during World War II. The camp, in Malheur County, housed 350 Japanese Americans who had been incarcerated in Oregon by Executive Order 9066 in the months after Japan bombed Pearl Harbor. …