The Mexican Farm Labor Program, also known as the Bracero Program, was the result of a series of agreements between Mexico and the United States in response to the demand for agricultural labor during World War II. Created by a presidential executive order in 1942, the program contracted with nearly 500,000 Mexicans to work in the United States from 1942 to 1947. Railroad companies negotiated an independent contract to import Mexicans to the United States during the same years, primarily as maintenance workers. The braceros helped Oregon sustain agricultural production during the war and were important in maintaining railroad lines for the transportation of goods, war materials, and people. Through these efforts, the braceros were a significant part of the Allied war effort.

The Mexican workers were called braceros because they worked with their arms and hands (bracero comes from the Spanish brazo, or arm). The bilateral agreement guaranteed prevailing wages, health care, adequate housing, and board. Although implemented at the federal level, the program in Oregon was administered by Oregon State College (now Oregon State University).

Nationally, the Bracero Program continued until December 31, 1964, with nearly 4.5 million Mexicans making the journey during the program’s twenty-two year existence. Braceros entered the United States under six-month to twelve-month contracts and were assigned to regions throughout the country, including the Pacific Northwest. Once the contract expired, each bracero was required to return to Mexico and sign another contract in order to return to the United States to work.

From 1942 to 1947, 15,136 Mexican men were recruited to go to Oregon. Hood River, for example, experienced critical shortages of agricultural laborers, despite efforts to mobilize the local community. In 1943, the town received 600 braceros, of the 5,000 who were sent to Oregon that year. Braceros encountered a variety of sentiments in Oregon. Governor Earl Snell recognized the contributions of braceros in a letter to the Mexican government, expressing Oregonians’ appreciation for the men's work. And as historian Erasmo Gamboa wrote, "One farmer from Columbia County summarized it best: these 'Mexican boys,' he said, 'were God-sent.'"

Mexican workers also faced racist attitudes. A camp manager in Medford reported that a Mexican national was attacked in public, "without provocation and severely injured by five young men.” The bracero was arrested but not the young men, because law enforcement officers mistook the bracero’s injury as public intoxication. Despite such incidents, for nearly five years braceros harvested Oregon’s wartime crops in support of the Allied war effort. In addition, nearly a dozen braceros died on the job in Oregon between 1943 and 1945.

During and immediately after the war, the U.S. government paid for the transportation of braceros either by railroad or aircraft. Because of the short-duration contracts, after 1947 growers were responsible for the transportation of workers to and from Mexico. The cost was prohibitive for Oregon growers, contributing to the end of the program in the state in 1947. Growers closer to the U.S.-Mexico border were able to participate in the program longer.

The Bracero Program created informal networks of labor migration from Mexico to the United States, and many former braceros circumvented the program and made their way back to their previous places of employment or elsewhere in the states. Even when the program was in place, the number of undocumented workers increased. In 1944, for example, the Immigration and Naturalization Service reported that it had detailed 30,000 undocumented Mexican workers; in 1945, the number had climbed to over 70,000. The number increased to 100,000 in 1946 and came to about 85,000 during the first six months of 1947. It was the group that came to Oregon during these years that eventually made up a significant portion of agricultural labor in the state.

It is unclear how many braceros broke their contracts and remained in Oregon or returned as unauthorized immigrants. If Oregon followed the national trend during the 1940s, the number was significant. The former braceros became part of the Latino diaspora that developed in the state and the nation in the second half of the twentieth century. 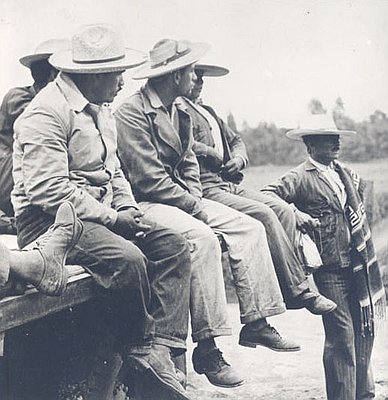 Gamboa, Erasmo. "The Bracero Program." In Nosotros - The Hispanic People of Oregon: Essays and Recollections, edited by Erasmo Gamboa and Carolyn M. Baun. Portland: The Oregon Council for the Humanities, 1995.