The eruption site is at the confluence of the Blitzen River and Kiger Creek, which drain the western slope of Steens Mountain. The broad floodplain is nearly saturated much of the time, with water held in poorly lithified (compacted) sandstone and siltstone a few feet beneath the surface. Such groundwater conditions became a formative force in the Diamond Craters eruption process.

Eruptions at Diamond Craters occurred between 7,790 and 7,320 years ago, as determined by radiocarbon ages from organic material beneath and atop lava and ash. The eruptions probably lasted one to two decades, an estimate that accounts for the volume of lava if extruded at typical rates. Previous dating efforts suggested the lava field was younger than 20,000 years.

During the early eruptive phase, lava spread from a central fissure or vent to cover a circular expanse about three miles in diameter. Conditions changed when magma (molten rock below the surface) filled the shallow subsurface rather than being forced out to the surface as lava flows. Consequently, the solidified crust of the lava field swelled into five or six elongated welts as high as 500 feet above the surrounding lava plain.

The intruding magma also intercepted groundwater, flashing it to steam that exploded from the confinement of the subsurface to blast through overlying volcanic and sedimentary rocks, pocking the area with craters. Clouds of coarse to fine-grained shattered bedrock and incandescent fresh cinders emanated from the craters and were showered across the landscape. The resulting ash blanket, as thick as 60 feet near the field’s central crater complex (the source for most of the ash), thins abruptly toward the margins of the lava field.

The Diamond craters, no fewer than 90 in number, are as deep as 150 feet and range in diameter from 130 to 920 feet. The majority are explosion craters reamed by steam blasts, but some are subsidence and drainback craters, caused by shallow-depth magma draining back into vents. A few are typical funnel-shaped craters that adorn the summits of small cinder cones, like those elsewhere in Oregon.

Three of the most-visited sites at Diamond Craters are in the west half of the lava field, accessible by road. Twin Craters, two large craters, form a pair whose rims are peppered with blocks of lava rock as large as 13 feet, a reminder of their explosive origin. The flat crater floors probably were once the surface of lava lakes that formed when lava oozed into the craters from below. Today, these lava floors are covered in explosion ash, 9 to 12 feet thick, that originated from the central crater complex.

The third most-visited site is Diamond Pond (an informal name), a six-foot-deep, reed-lined, half-acre pool near the western edge of the lava field. The pond lies within an explosion crater that has slowly filled with sediment as its sides sloughed inward. The crater had a narrower throat when first formed, and its floor lay at least 100 feet deeper than it does now. The pond is considered a nonflowing spring, its surface lying essentially at the water table surface. Over the eons, the pond has evaporated and refilled repeatedly as the water table has fluctuated through droughts and wetter times. Diamond Pond is also known as Malheur Maar (an informal name), from a German word for lakes found in explosion craters.

Most of Diamond Craters is on public land managed as an Outstanding Natural Area by the U.S. Bureau of Land Management. The Malheur National Wildlife Refuge oversees a narrow western strip, about 3 percent of the field, and another 3 percent is held privately. The area is used by recreationists, including bird watchers and hunters. It is a quiet grassland sparsely dotted with sage and juniper, with five scraggly aspen gracing a short stretch along the lava’s southern limit.

Wildlife is characteristic of the High Desert, including upland birds, passerines, and hawks; several species of amphibians and reptiles, including rattlesnakes; and deer, coyote, and fox. A well-graded unpaved road crosses the lava field, providing access to Twin Craters and Diamond Pond, and a less-traveled vehicle track reaches into the northern part of the field before petering out at private landholdings in the northeast corner. Foot and horse access is at large, and there are no trails. 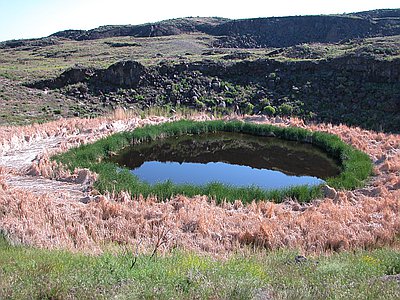 Located in Oregon’s High Desert, Burns is the county seat of Harney County, the largest county (in physical size) in Oregon. The town is thirty miles north of the Malheur Wildlife Refuge and Malheur Lake in the Harney Basin, near Steens Mountain and the Steens Mountain Wilderness area, and had …