Chemawa Indian School has been a leader in organized athletics in the Willamette Valley since the 1890s, winning state titles in football, basketball, track, cross-country, and basketball. Opened in Forest Grove in 1880 and moved to Salem in 1885, Chemawa was the second off-reservation boarding school in the nation. During its early years, its sports teams competed with high schools, colleges, city leagues, and reservation teams, and they made an important contribution to the development of intramural athletics in western Oregon. Chemawa athletes are primarily from tribes and reservations in the Plains, Southwest, and Northwest, and many are second- and third-generation legacy students at the school.

Chemawa’s athletic programs began in 1894-1895. The most important sports for boys were football, baseball, basketball, and track, and by 1903 the most important girls' team was basketball. Athletics programs at the school were developed to improve the character and health of all students. The boys' program had first, second, and junior teams in football and basketball, and the girls' teams played against college teams, including those at Willamette University.

From the 1890s into the 1920s, a typical season for Chemawa’s boys' teams included football games against the Multnomah Athletic Club, the University of Oregon, Newberg (present-day George Fox University), the Oregon Agricultural College (present-day Oregon State University), the Salem Capital Athletic Club, Salem High School (present-day North Salem High School), and the Sherman Indian School in Riverside, California. In 1902 and 1903, Chemawa athletes traveled to play football games against the University of California at Berkeley and Stanford University and to play baseball teams in Washington and British Columbia. In 1908, the baseball team defeated Columbia University at Chemawa.

During the early years of organized play in western Oregon, athletic teams faced few rules and regulations. For example, age restrictions allowed both alumni and visiting students to play on a school’s team. Chemawa athletes also played for other teams in the area, and the better players were paid to play for city clubs and colleges. This practice ended after 1918 when colleges and high school leagues adopted more stringent rules for amateur sports.

There reportedly were some officiating problems when the Chemawa team played as a visitor. According to the Chemawa American newspaper, some games ended prematurely, with players explaining the rules to officials and calls going against the team. Oregonian headlines labeled Chemawa teams as Reds and Redmen, suggesting that there may have been prejudice against the school’s athletes.

In 1909, Chemawa became part of the Willamette Valley College Basketball League, composed of private colleges in western Oregon (Dallas, Willamette, Philomath, McMinnville, Pacific, and Albany). The Chemawa Basketball League was formed the same year, and games were arranged between the departments at the school. In 1912, Chemawa joined the Salem City Basketball League.

In 1914, the Chemawa football team captured the nonconference title for independent schools in Oregon and went on to challenge the leading collegiate team. Chemawa footballers won the OSAA Class B league title in 1944, with Chief Tommy Thompson (Warm Springs) as head coach and Reuben Sanders (Siletz) as assistant coach. Sanders, who is honored in both the American Indian Hall of Fame and the Oregon Athletic Hall of Fame, was a distinguished player for Chemawa from 1895 to 1918 and a coach from 1911 to 1944. Other celebrated players include Joseph Teabo (Grand Ronde; baseball and football), Robert Service (Clatsop; baseball), Leonard Vivette (Grand Ronde; basketball), Sam Morris (Nez Perce; baseball), and Warren “Lefty Wild Eagle” Wilder (Karok; football).

Other Chemawa teams were also successful. Between 1907 and 1912, the cross-country relay team competed against the Multnomah YMCA in a forty-eight-mile road race from the State Capitol in Salem to the Portland YMCA. Chemawa won the race in its first four years. The boys' cross-country team won championships in 1964, 1972, 1981, and 1986. In the 1930s, Chemawa sponsored an All-Star and All-Americans men’s basketball team of alumni and was involved in town league play. The school won the state basketball championship for the Big Nine League in 1941.

The school was part of the Tri-River Conference League in the 1980s and is in the Pacwest Conference today. Chemawa’s earliest team name on record was the Chemawa Indians. They later were named the Chemawa Braves. The women’s teams are the Lady Braves. The football field is named Reuben Sanders Field in honor of their greatest athlete and coach. 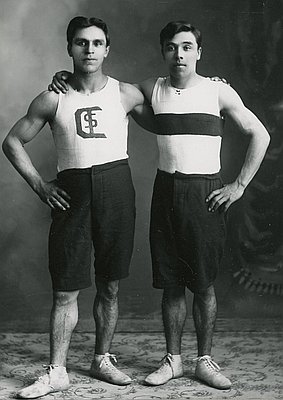 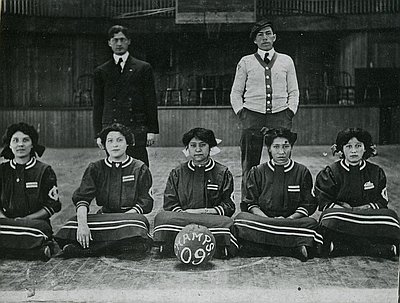 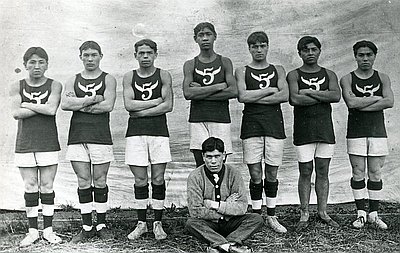 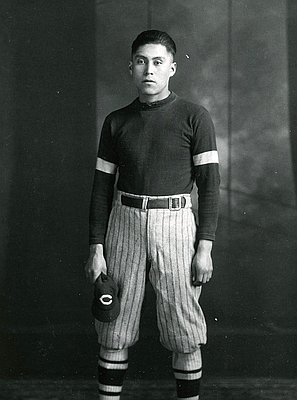 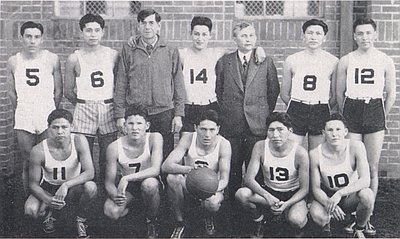 Chemawa Indian School, in the mid-Willamette Valley north of Salem, is an accredited high school with grades nine through twelve. It is one of four remaining off-reservation boarding schools funded and operated by the Bureau of Indian Education (BIE). Most of the students come from reservations and communities in the …

Reuben “Reub” C. Sanders was one of Oregon’s greatest all-around athletes. He lived for most of his life in Salem, where he played and coached for Chemawa Indian School and competed in football, baseball, basketball, bike racing, boxing, wrestling, and nearly all track sports. He won a gold medal in …