Melville Thomas Wire, an ordained minister of the Methodist Church, was a talented artist who successfully combined his work for the church with his avocation of outdoor painting in an impressionist style.

Born in Austin, Illinois, on September 24, 1877, Wire moved with his family to Oregon when he was seven. His father, Melville Cox Wire, accepted the post of pastor at the First Methodist Episcopal Church in Salem, where he also taught Greek and Hebrew at Willamette University. He enrolled his son in the university's academy for children, where the young boy studied art with Marie Craig. As he grew older, Melville's love of the outdoors became evident as he traveled and sketched the landscapes he visited.

Wire continued his education at the state university (now University of Oregon) and Albany College (the predecessor of Lewis & Clark College). In 1899, he went back to Illinois to study for the ministry at his father's alma mater, Garrett Biblical Institute, in Evanston. Wire returned to Oregon in 1902 to accept a pastorate in Brownsville.

Methodist ministers were moved every few years, and Wire took advantage of that mobility to paint the diverse landscapes of the Oregon countryside. His vocation—the ministry—and his avocation—art—worked in tandem, allowing him ample time for both. His subjects, both familiar landmarks and lesser-known pastoral scenes, conveyed a personal emotion facilitated by his ability to capture atmosphere, light, and color. He painted in both oil and watercolor. Three of his paintings were exhibited at the Panama Pacific International Exposition in San Francisco in 1915.

At the encouragement of congregation member Gordon Gilkey, Wire began studying printmaking and went on to be nationally recognized for his etchings. Wire used many of the same subjects in his etchings that he had painted and photographed. Between 1944 and 1948, the Associated American Artists Gallery purchased eight of Wire's etchings for publication and national distribution. He was a member of many artist professional groups and the recipient of a number of awards.

His first marriage was short-lived, but in 1910 he met and eventually married Bessie Edna Burgess. The marriage lasted until her death forty-seven years later. Bessie was also an artist, taught mainly by her husband. She worked primarily in watercolor, with awards and exhibitions to her credit. After Bessie's death, Wire moved to the Willamette Lutheran Home in Salem, where he met and married his third wife, Bertha Peabody Shiffer.

Wire traveled the state, serving various parishes for sixty-one years. He was also a participant in art clubs, a noted printmaker, and a photographer. After Wire retired from the ministry in 1946, he devoted himself completely to his art. He continued to exhibit in galleries and museums, to promote his etchings, and to devoted more time to watercolors.

Wire's interpretations of the scenery he loved create a unique body of work that represents the diversity of Oregon's landscapes. 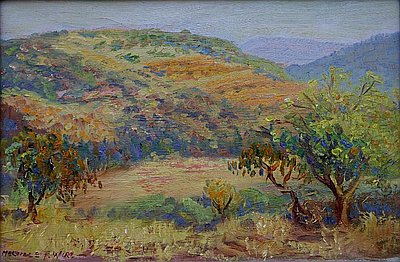