Between 1869 and 1887, Warren Haywood Williams provided sophisticated architectural design to commercial, residential, and institutional clients in the Pacific Northwest. His most successful buildings used ornament to reinforce a design's intrinsic proportion and rhythm. Surviving projects include Craigdarroch Castle in Victoria, B.C., the Old Church and Merchants' Hotel in Portland, and Villard Hall on the University of Oregon campus in Eugene.

Born in New York City in 1844, Williams moved with his family to San Francisco between 1850 and 1852 in the wake of the California gold rush. His father, Stephen H. Williams, launched a successful architectural career in the city; and in 1860, at the age of sixteen, the young Williams became an apprentice draftsman in his father’s office. He received additional education in that first year from his father’s business partner, Henry W. Cleaveland, who had written an architectural plan book and had helped establish the American Institute of Architects in 1857. Cleaveland was later credited with transplanting the Italian Villa style to the West Coast.

By 1869, Oregon’s early settlement era was over, and development of the state’s natural resources—lumber, fish, and agricultural products—was underway. Portland was becoming a center of commerce and shipping, which required larger warehouses and commercial storefronts; the number of banks, churches, and fraternal organizations was also growing. S.H. Williams & Son began its work in Portland when the firm was engaged to design the Odd Fellows Temple at Southwest 1st and Alder streets. The three-story structure, with a prominent clock tower and cement-stuccoed walls enriched with decorative cast iron, gleamed in a sea of mud. Its proportions were generous: the ceiling of the third-floor meeting hall rose twenty-one feet, with windows thirteen feet tall and five feet wide.

In late 1872, a fire destroyed the buildings on twenty-two blocks in downtown Portland, and Williams sensed his opportunity for more work in the city. He and his wife and three young children moved to Portland in January 1873, and for eighteen months he partnered with architect E.M. Burton. A second fire provided additional demand for the firm’s residential and commercial designs, as well as a terra cotta sewer line.

In April 1874, Williams drew plans for the Good Samaritan Hospital in northwest Portland; at the same time, his partnership with Burton ended. By this time, many of the city’s prosperous businessmen were ready to “go public” with their wealth, and Williams began designing elegantly proportioned homes that frequently occupied a full city block. Williams’s buildings, variations of the Italianate architectural style popular in San Francisco, began rising in the southwest Park Blocks and along Northwest 18th and 19th streets, north of Burnside.

Between 1875 and 1878, Williams and Justus Krumbein were partners, but for the last ten years of his life Williams maintained a solo practice. In addition to his residential work, he was responsible for many three- and four-story, block-long warehouses and commercial buildings enriched with locally made cast iron. Decorative motifs—a woman’s head was a favorite—appeared on both cast-iron storefronts and homes built of wood. His work, which extended to The Dalles, Albany, and Eugene, and Victoria, B.C., ranged from the interior of a federal revenue cutter to a Chinese merchant’s store to a roadhouse. Architectural styles included Moorish-Byzantine (Temple Beth Israel, Portland), Queen Anne (the S.E. Young home, Albany), Carpenter Gothic (the Old Church, Portland), and Second Empire (Villard Hall, University of Oregon).

Williams was a capable and prolific professional with diverse social connections, including memberships in Portland's lodge for skilled craftsmen, the Ancient Order of United Workmen, and the invitation-only Arlington Club. He maintained a busy practice until his death of pneumonia in January 1888. 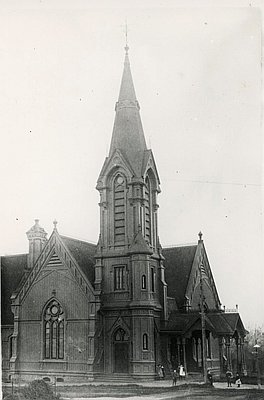 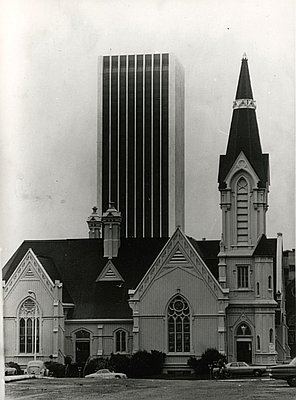 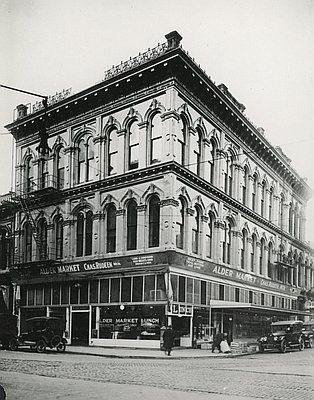 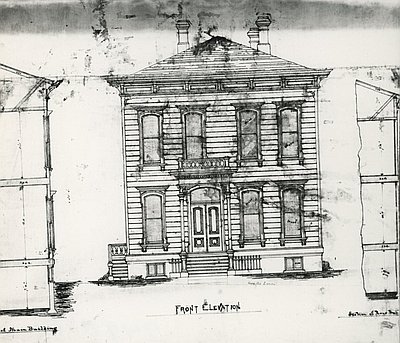 In 1882, fifty Presbyterians organized a new Portland congregation. They engaged architect Warren H. Williams to design a structure combining the spare simplicity of their denomination with the grandeur of their aspirations. Williams' rendering of classic ecclesiastical forms in wood produced a striking example of "Carpenter Gothic" architecture. A year under …