In 1996, as part of a larger pattern of winter flooding in the Pacific Northwest, the Willamette River experienced a major flooding, threatening the City of Portland and seriously damaging the navigation locks at Willamette Falls. It was one of the more serious floods of the twentieth century. Portland's seawall was in danger of over-topping, but city and voluntary crews under Army Corps of Engineer supervision constructed a temporary levee on top of the seawall to prevent major flooding in the downtown area. As the river reached its crest, several hundred people filled sandbags and built a temporary plywood wall to prevent the river from lapping over the concrete seawall.

The Willamette River, in its natural state, was always subject to annual flooding. Draining an area of over 11,200 square miles, the river supplied water for agricultural, industrial, municipal, and domestic uses in the Willamette Valley. But between November and February, heavy rains falling on deep snow at higher elevations, accompanied by a rise in temperature and heavy precipitation in the valley, often produced major flooding along the river.

In the late 1930s, the Corps of Engineers recommended a comprehensive plan, including storage dams on tributaries of the Willamette and other river improvements to greatly reduce property damage from high water. The stored water also benefited navigation, irrigation, water quality, and power generation. Congress approved the basic Willamette Basin plan; and over the next thirty years, after some revisions, the Corps constructed eleven storage and two re-regulating dams.

In late January and early February 1996, the Corps manipulated the storage dams in the Willamette Basin to hold backwater and lessen flooding, reducing river levels two feet in Portland and at other Willamette Valley locations. It is estimated that the Corps' flood control projects in the basin prevented flood damages at Portland of $1.1 billion.

While more flood-control dams were in operation by 1996, significant increases in development along the rivers of the Willamette Basin, coupled with increased logging and clear-cutting of the watershed in the Cascade Mountains since the 1964 flood, heightened the potential for losses. Environmentalists argued that returning the Willamette River to a more natural, less channelized state would help alleviate future flooding in the valley. 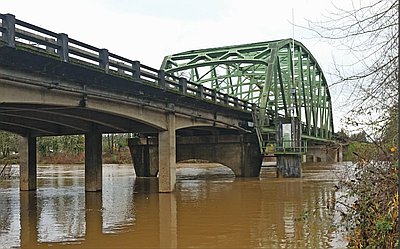 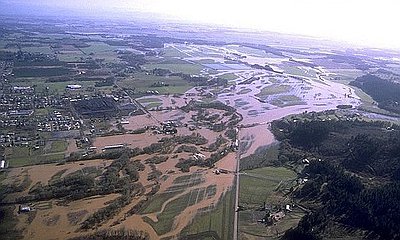 The Willamette River, in its natural state, has been subject to annual flooding, at times severe. Draining an area of over 11,200 square miles, the river supplies water for agricultural, industrial, municipal, and domestic purposes in the Willamette Valley. Between November and February, heavy rains often fall on the deep …

The Willamette River, in its natural state, was subject to annual flooding. Draining an area of over 11,200 square miles, the river supplied water for agricultural, industrial, municipal, and domestic uses in the Willamette Valley. But between November and February, heavy rains falling on deep snow at higher elevations, accompanied …

The Willamette Valley, bounded on the west by the Coast Range and on the east by the Cascades, is the largest river valley in Oregon. Part of the Cascades geological province that extends from British Columbia to northern California, the valley is an elongated, relatively flat body of land extending …