Western Oregon University, one of Oregon’s oldest public institutions of higher education, began as a private institution in 1856 and was incorporated into the state system as a teacher training institution in 1882. The campus occupies 160 acres in Monmouth, a town of about ten thousand people in the mid-Willamette Valley. The university, which offers undergraduate and graduate degrees in arts and sciences, education, and professional areas to about 5,500 students, is known for small class sizes, a focus on sustainability, and a diverse liberal arts education in a student-centered environment. In 2015, Western Oregon University became an independently governed institution with its own board of directors, as did the other public universities in the Oregon University System.

In the mid-nineteenth century, a group of Disciples of Christ members began a mission to establish a church community and institution of higher education in Oregon. On January 18, 1856, with support from settlers Thomas H. Lucas, John B. Smith, and Squire S. Whitman, who donated land and money, the Legislative Assembly of the Territory of Oregon passed an act to establish an institution of learning in Polk County, known as Monmouth University.

The school received financial support from men who later served in elected and appointed offices in Oregon, including Reuben Boise, chief justice of the Supreme Court; Ira F.M. Butler, territorial legislator and Polk County judge; and Thomas Hutchinson, Polk County surveyor and county clerk. A wooden schoolhouse constructed in 1858 served as the Disciples of Christ church and the college, which offered classical and religious education studies. The City of Monmouth was incorporated in 1859, and residents provided student housing, improved local transportation, and participated in campus activities.

Other Disciples of Christ members had founded Bethel Institute in 1856 for the liberal arts in the nearby community of Zena. By 1865, church members could no longer support multiple schools in the area, so Monmouth University merged with Bethel to become Christian College, with Levi L. Rowland as president. When Thomas Franklin Campbell was named the school’s second president in 1869, the Christian College board of trustees directed him to raise funds for a university building. A Gothic Revival style structure, later named Campbell Hall, was constructed in 1871 from local clay bricks; it is the oldest building on Oregon’s public university campuses. Campbell Hall was patterned after buildings at Bethany College in West Virginia, where President Campbell studied.

In 1882, the legislature established normal schools in Ashland and Monmouth. Christian College was renamed Oregon State Normal School, which focused on preparing teachers for public and private elementary and secondary schools in Oregon. A wing was added to Campbell Hall in 1889 and again in 1898, funded with private donations.

When the legislature decreased funding for state normal schools, the Oregon State Normal School closed in 1909. It reopened with renewed state support in 1911 as Oregon Normal School, with John H. Ackerman as president. Ackerman hired faculty who were national and regional leaders in education, and they formulated standard curricula that were adopted by schools throughout the state.

The campus grew to include a women’s dormitory, a gymnasium, and the Monmouth Training School—a model training facility for teachers (later repurposed as the Instructional Technology Center). From 1911 to 1940, the college operated Rural Training Centers in towns near Monmouth, where prospective teachers were given classroom experience in schools under the direction of Training School faculty. The rural program was used as a model by other Oregon teacher training institutions, but the centers were later closed as urban school districts were established.

In 1939, the school’s name was changed to the Oregon College of Education, which offered two- and three-year diplomas. Four-year degrees were added beginning in 1941. By 1945, enrollment at the college had dropped dramatically to 130 students (four were male), but it began to rebound after the war when students took advantage of the GI Bill.

In 1981, the school added liberal arts and science degrees to the curriculum, and the name was changed to Western Oregon State College. The name change to Western Oregon University in 1997 was a result of legislation that established regional colleges (Western, Southern, and Eastern Oregon) as comprehensive universities with a full range of baccalaureate and graduate programs.

Notable affiliated organizations and groups include two nationally recognized organizations: Teaching Research (now the Research Institute) and the National Center on Deaf-Blindness. Other organizations affiliated with the campus are the Oregon Military Academy, the Jensen Arctic Museum (the collection moved to the University of Oregon in 2014), and the Department of Public Safety Standards and Training (moved to a new facility in Salem). Of regional interest are the Smith Fine Arts series, the Rainbow Dance Theater, and the Polk County Cultural Coalition. The university competes in the Great Northeast Athletic Conference (NCAA Division II); the mascot is a wolf.

Notable events in the history of the school include the planting of the Sequoia tree outside Campbell Hall by members of the 1887 graduating class, a local landmark that has been used in the college’s annual holiday tree lighting; the Gus Hall Affair, a controversial 1962 speech on campus by the secretary of the American Communist Party; the October 1962 Columbus Day storm, which severely damaged the campus, including Campbell Hall and the adjacent grove of trees; and the school’s annual participation in the Fourth of July parades in Monmouth. 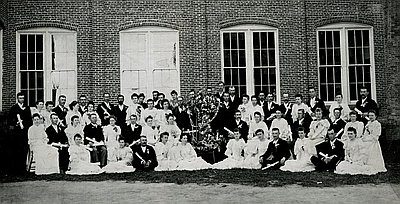 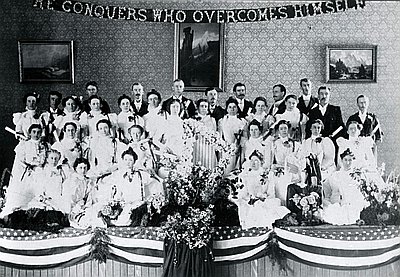 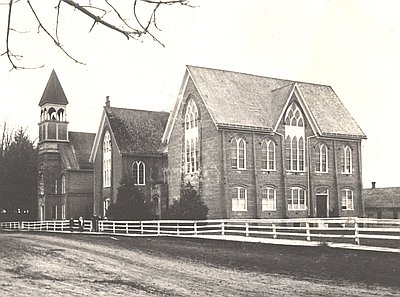 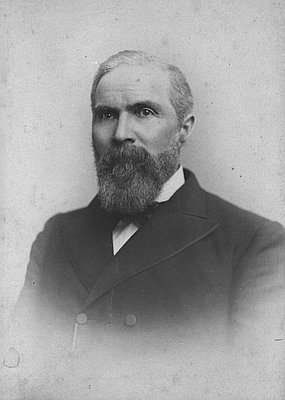 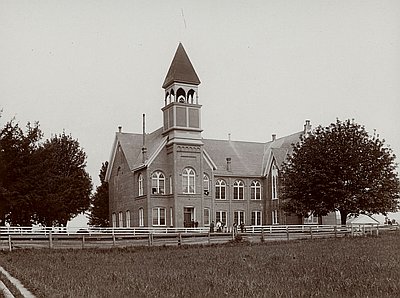 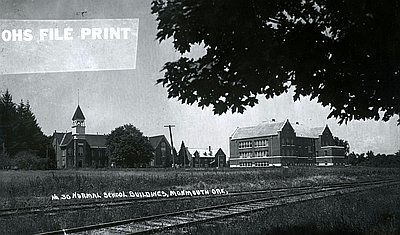 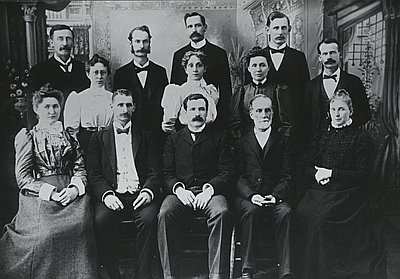 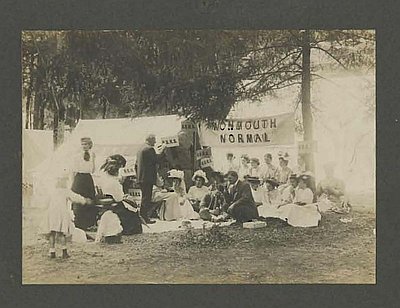 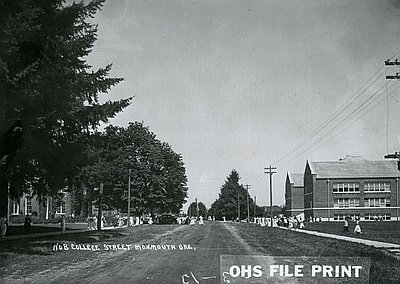 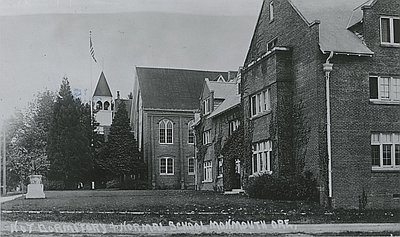 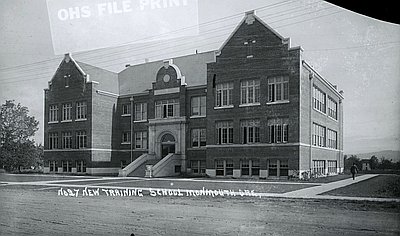 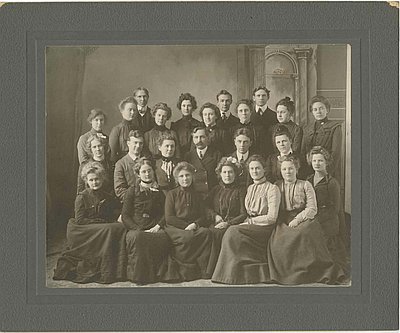 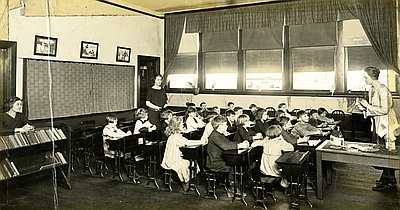 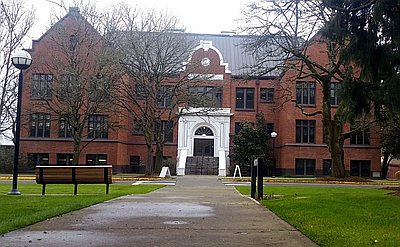 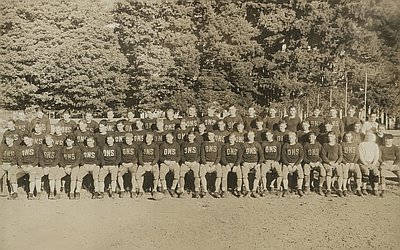 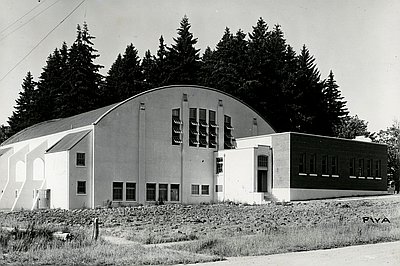 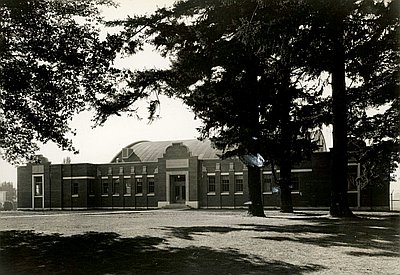 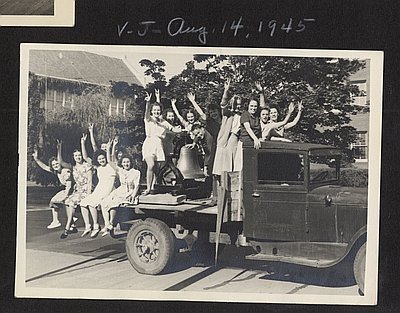 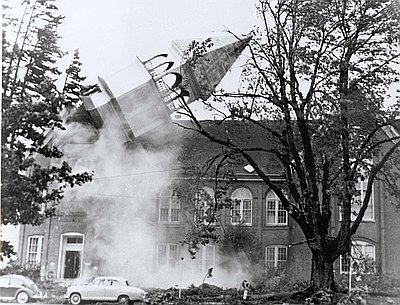 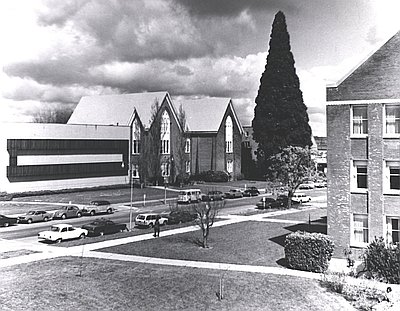 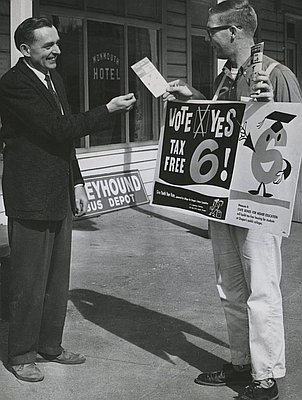 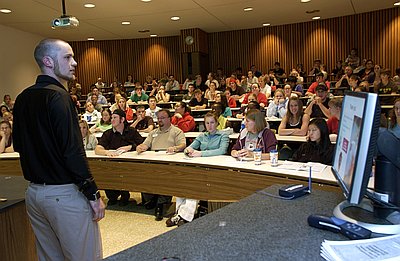 On the morning of Friday, October 12, 1962—Columbus Day—a massive storm hit the coast of northern California. The storm had originated several days earlier in the Pacific Ocean, about five hundred miles north of Wake Island. Re-energized by a combination of unusual meteorological conditions, the storm moved north with the gathering force …

Democrat Edith Starrett Green represented Oregon’s 3rd Congressional District from 1955 through 1974. During her twenty years in the U.S. House of Representatives, she gained a national reputation for her leadership in shaping federal education policy and her advocacy for equal rights for women. She was known for her independence, …

Paul and Arlene Jensen established the Jensen Arctic Museum on the Western Oregon State College campus (now Western Oregon University) in 1985 to educate Oregonians about the environment and heritage of the Arctic. With over five thousand artifacts, the museum was one of the largest collections in the United States …

Maurine Brown Neuberger entered politics as an Oregon state legislator and, as of 2010, was Oregon’s first and only woman to serve in the United States Senate. Neuberger was an advocate for consumer rights and women’s issues, and she advanced the causes of the Democratic Party in Oregon and the …

Monmouth’s claim to fame as Oregon’s last town to prohibit the sale of alcohol ended in 2002 when voters passed a ballot measure overturning a law that had its beginnings in the mid-nineteenth century. In the early 1850s, more than a dozen families of Disciples of Christ churches in the …