Dr. Newton K. (Uyesugi) Wesley, an optometrist and medical doctor in Oregon, was a pioneer in the development of plastic corneal contact lenses in the 1940s and 1950s. He and his partner, Dr. George Jessen, invented the first plastic contact lenses to successfully treat keratoconus, a mysterious condition that, if left untreated, results in blindness. Wesley himself suffered from keratoconus, and his lenses arrested the progress of the disease and saved his sight. He not only developed many types of lenses, but he also taught thousands of doctors how to fit the relatively new ocular aids to help their patients. After approval by the American Medical Association in 1970, variations of the lenses have been worn by millions of people all over the world.

Newton Uyesugi was born on October 1, 1917, to immigrant Japanese parents in the sawmill town of Westport, Oregon. In 1925, his family moved to Portland, and at the age of nineteen he enrolled at the North Pacific College of Optometry. He changed his name legally to Newton K. Wesley in 1942, he later explained, because when he was practicing optometry in Portland his patients did not know that Uyesugi started with a "U" and could not find his name in the telephone book.

Soon after Wesley opened his practice in Portland in 1939, his former teacher and owner of North Pacific College, Dr. Harry Lee Fording, offered to sell the business to him for $5,000. Wesley was only twenty-two years old at the time, but he and another classmate, Dr. Roy Clunas, bought the school in 1940. The partners operated the school until the summer of 1942, when they were forced to close. Wesley was confined at the Portland Assembly Center for people of Japanese ancestry and, after a few months, was “relocated” to Earlham College in Richmond, Indiana. He never returned to Oregon to practice.

In 1946, Wesley entered the field of contact lenses when he joined with George Jessen in Chicago to form the Wesley Jessen Corporation, a contact lens company. Schering Plough bought the company in 1980, and Ciba Visions bought it in 2001. Though few people know that the contact lenses worn by millions of people today grew out of the pioneering efforts of Newton K. Wesley and George N. Jessen, their names are still honored in the industry. 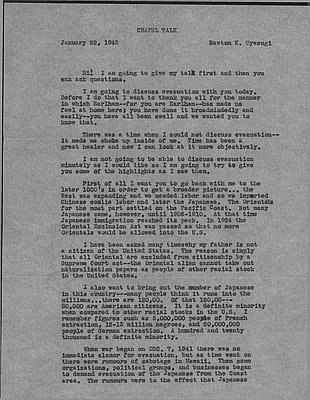