Leonard Wallulis was one of the most colorful lumberjacks in Oregon history, putting on Paul Bunyan demonstrations and winning contests in front of thousands of spectators. He made his living working in the woods of the Oregon Coast at a time when a timber faller's speed was the crucial determinant in making a good day's work—speed that contributed to both high rates of production and increased physical danger. Wallulis personified the skilled logger of Oregon's highballing era before hard hats and chainsaws.

Wallulis was born in Mahanoy City, Pennsylvania, on April 11, 1902, the son of Russian immigrants William and Martha Barbara Savisky Wallulis. His family moved first to Washington in about 1905. By 1910, they were living in Hamlet, Oregon.

A successful logger, Wallulis participated in the timber carnival in Longview, Washington, on July 4, 1931, and won the chopping event in front of ten thousand people. On Labor Day 1932, the boss lumberjack and champion faller put on a Paul Bunyan demonstration, sponsored by the Seaside Chamber of Commerce, for an estimated thirty thousand spectators. Exhibiting physical strength and a culture built around masculinity, Wallulis won the log-chopping contest by cutting through a thirteen-inch hemlock in forty-one seconds. He then used his axe to shave. His wife called him Paul Bunyan Jr.

In December 1936, Wallulis entered a Ripley’s Believe It or Not contest in Portland in which he shaved with a double-bitted axe, ground to razor-thin sharpness. He was one of the finalists of the 3,200 contestants, and the Oregonian ran a cartoon of him on December 5.

In the early 1930s, Wallulis served two terms as clerk of the Ferndale School District in Wheeler. In winter 1943, he was foreman of the first women’s crew in Oregon, setting out about 225,000 trees in the Hamlet State Forest. His wife, Anna M. Bocek, was among the crew of six.

In 1964, the Wallulises made an agreement with the Oregon Fish Commission to exchange property they owned to provide a site for a new hatchery on Foley Creek, near the Nehalem River, for title to an abandoned fish hatchery near Mehama. In 1966, they exchanged ten acres on the North Fork of the Nehalem in a three-way trade with Clatsop County and the Weyerhaeuser Company, which gave up its old Coos Bay hatchery property.

Wallulis died in Bend on November 17, 1977. In 1983, his wife Anna donated both his chopping and his shaving axes to the Tillamook County Pioneer Museum, where they are still on display. Leonard and Anna Wallulis are buried in the Independent Order of Odd Fellows (IOOF) Cemetery in Bay City. 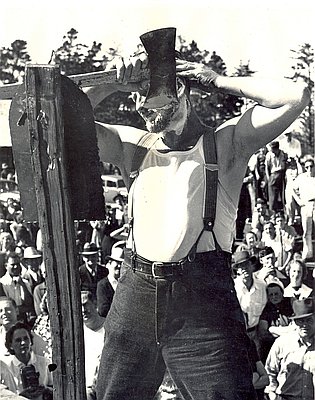