From 1965 until 1974, the Valley Migrant League (VML) helped Oregon migrant farm workers and former farm workers attain a better life through education and social services. As part of the federal War on Poverty, the VML was a private, nonprofit organization that was instrumental in establishing a strong Hispanic community and Chicano leadership in the Willamette Valley.

The VML’s successes were hard won. In the course of its existence, VML struggled with charges of mismanagement, changing federal priorities and funding, and a difficult transition from having mostly non-Hispanic leaders to being run entirely by former migrant workers.

In 1963, President Lyndon B. Johnson launched a War on Poverty, and Congress soon passed the Economic Opportunity Act. The act included a Community Action Program, which granted federal funds to local private or public anti-poverty agencies. An important mandate of the program was to empower impoverished communities by giving them decision-making power over the use of the allotted money. The Economic Opportunity Act also established Volunteers in Service to America (VISTA), a domestic Peace Corps program, to place workers in anti-poverty programs around the country. Eighty VISTA volunteers were posted in Oregon to help start the VML.

By the late 1950s, Oregonians became more aware of the problems facing migrant workers. The farm workers, most of whom were Mexican Americans, followed a seasonal cycle of planting and harvesting, moving through Oregon, Washington, and Idaho before returning to Texas in the winter. In 1965, the VML reported that 17,000 migrant farm laborers came to the Willamette Valley for seasonal work, and that 5,000 had permanently settled in the area. The workers were poor and were unable to get adequate education, largely because of transiency. While working in Oregon, many lived in farm-owned camps that were overcrowded and unsanitary.

Church groups that were concerned about migrant workers and progressive leaders who were well connected to Oregon’s state government came together to form the VML. The coalition invited farm owners, farm workers, and representatives from the Willamette Valley to join the board.

The VML served a mostly Hispanic population, but anyone who worked in seasonal agriculture was eligible. That included Russian immigrants, known as Old Believers, and a small number of African Americans.

The VML faced some opposition from local communities and farmers who did not want outside interference with farm labor. There were also internal conflicts with some migrants who believed the VML didn't go far enough in advocating social change. As a result, in 1966 migrant workers in Hillsboro formed Volunteers in Vanguard Action (VIVA), an organization intended to be independent of governmental control and proactive in getting workers into settled jobs and homes. All of the Hillsboro VISTA volunteers left the VML to join the new organization.

In 1967, the Oregon Journal published a four-part series charging the VML with wasting federal money by overspending and supporting a top-heavy bureaucracy. Some farm workers and former farm workers agreed and chafed against their backseat role in the organization.

That same year, the VML hired John Little as the new executive director. Because Little spoke Spanish and had experience working in Ecuador in community development, he was able to move the organization toward a Hispanic leadership. Two years later, the VML board changed its bylaws to give more representation to farm workers, and in 1970 Frank Martinez became the organization’s first Hispanic executive director. The board changed its bylaws again in 1970 so that all members were farm workers and former farm workers.

At the same time, diminishing federal funding and shifting priorities forced the VLM to close its day care centers. Still, the organization managed to offer some new programs, including leadership training, small business loans, and “self-help housing,” which helped former migrant workers build their own homes. The VML also established the Centro de Salubridad health clinic in Woodburn, which still exists in 2008.

In 1974, the VML reorganized under a new name, Oregon Rural Opportunities. ORO focused on becoming a statewide organization and opened offices in Ontario, Hermiston, Hood River, and Talent. Gilbert Bazan, who had been director of the VML, stayed on as the new agency’s leader. ORO faced difficulty obtaining grants and had continual problems with the leadership of its health care program, losing several directors in a few years. In 1979, the U.S. Department of Labor bypassed ORO and granted funds to a California-based company, which led to the resignation of Bazan and the closure of the ORO.

While the VML and ORO were not able to sustain their programs long term, their effect on many former migrant workers was profound. The VML helped organize the Hispanic community, and many who were helped by the organization went on to work with migrants and in education. 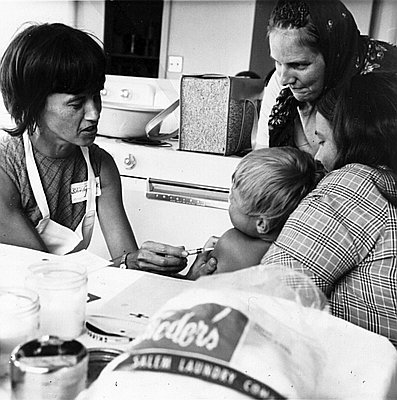 Founded in April 1985, the Pineros y Campesinos Unidos del Noroeste (the Northwest Tree-Planters and Farmworkers United) is one of the largest organizations representing Latinas and Latinos in Oregon. Based in Woodburn, PCUN grew out of the work of the Willamette Valley Immigration Project (WVIP), a legal aid organization founded …