Skunk cabbage (Lysichiton americanus), which grows in mucky soils and marshes from northern California to Alaska, is one of the few members of the Arum (Araceae) family native to the Pacific Northwest. Its flowers (on the clublike stalk) and surrounding bright yellow spathe emerge as early as February, soon followed by the emergence of waxy dark green leaves. The flowers emit an odor that gives them their common name—not exactly skunk-like, but strong and distinctive, which some people find unpleasant. Skunk cabbage was important to Indigenous people, who dug the roots and roasted them for food. Like taro and many other arums, skunk cabbage roots and leaves contain chemical compounds (oxalic acid) that cause severe pain to the mouth, but proper roasting breaks down these compounds. The roots can also be boiled, but require several changes of water. Indigenous people also used the large leaves to wrap foods and as a layer in earth ovens to help preserve moisture while foods cooked.

Some sources report that Native people regarded skunk cabbage as an emergency food, and some say that the roots were cherished. In an interview with linguist J. P. Harrington in 1942, Hanis Coos elder Lottie Evanoff said that she very much liked skunk cabbage and found it curious that settlers did not eat it. “Bear eats skunk cabbage, is just crazy for it,” she said. “So it must be good eating, everything bear eats is good eating.”

Many Natives use the roots for medicine, as topical medicines to treat skin conditions and to treat respiratory diseases. For example, Beverly Ward wrote about her husband’s Lower Coquille grandmother, Susan Ned: “She kept a bunch of skunk cabbage and licorice [fern] roots on the wall in the kitchen. She put a big kettle of water on the stove and boiled the roots until the water boiled down, then she used the juice for colds and coughs.” Frances Talbot Elliot, my Milluk (South Slough Coos) great grandmother, used to grind up skunk cabbage roots, mix them with honey, and give a spoonful of the peppery medicine to children when they had a cold.

The importance of skunk cabbage also made an appearance in some Indigenous legends. On the lower Columbia and Willamette rivers, the Kathlamet and Clackamas peoples had stories about skunk cabbage as an important food that kept people alive before the salmon first came to the rivers. In the Coosan trickster cycle stories, the first trickster learned how to cook skunk cabbage. He tried to eat it raw, but spit it out. Then he put the root in hot ashes to cook. When it smelled sweet, he took it out. It tasted fine now, and so he said that is how human beings will cook it when they come into the world. Then he cut the root into many pieces and one at a time picked up a piece and put it down, each time saying, “Give this to your…” and naming a different kin name (mother, father, grandfather, and so on). In that way, he named familial relationships for the human beings to come in the world.

Skunk cabbage exudes a strong scent that attracts beetles as pollinators, and in ideal habitats the leaves can grow to be more than three feet long (150 centimeters). The tops of the plants die back in winter, but new waxy leaves emerge early in spring, along with a modified yellow leaf called a spathe. The clublike structure inside the spathe is the spadix and contains both male and female flowers. The roots are eaten by bears, elk, muskrats, and other animals. Other well-known members of the Arum family are the popular landscaping plant calla lily (Zantedeschia aethiopica) and the widespread Asian root vegetable taro (Colocasia esculenta). A distantly related species with the same common name of skunk cabbage, Symplocarpus foetidus, is native to parts of eastern Canada and the United States.

Hymes, Dell. Now I Know Only so Far: Essays in Ethnopoetics. Norman: University of Nebraska Press, 2003.

Gunther, Erna. Ethnobotany of Western Washington; The Knowledge and Use of Indigeneous Plants by Native Americans. Seattle: University of Washington Press, 1945. 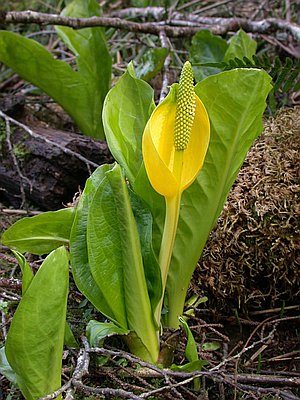 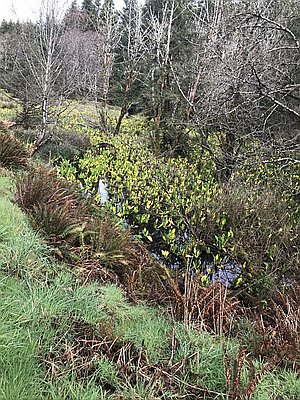 Native Americans were the first to recognize the substantial benefits of fernleaf biscuitroot (Lomatium dissectum var. dissectum), which thrives in open, rocky slopes and meadows. A perennial, the plant is native to the West Coast from British Columbia to northern California and in northern Idaho.

Oregon grape is a common name for members of the barberry family, Berberidaceae. The six native species of the plant are widely distributed through Oregon in a variety of habitats on both sides of the Cascade Mountains to the coast and in the northeastern part of the state. Some species …