Shinzaburo Ban was a Japanese businessman who was instrumental in bringing people of Japanese ancestry to Oregon. Though primarily known as a labor contractor, he was a jack of all trades, with business interests in a variety of enterprises: several mercantile stores, a newspaper, a post office, a sugar beet farm, shingle mills, and a livestock ranch.

Ban was born and educated in Tokyo. He studied English with American missionary James Hepburn and served with Japanese Consul-General Taro Ando in Honolulu. While in Hawaii, Ban became aware of the growing demand for railroad workers on the American mainland. He resigned his position and returned to Japan to set up a contracting business, then immigrated to Oregon, arriving in 1891 with his wife Kiyo.

As a Japanese labor contractor, Ban recruited workers in Japan for railroad companies in the United States, put them under contract to him, and arranged for their passage. Once they arrived in America, Ban provided housing and transportation and acted as a go-between, connecting the workers and the railroad companies. For that service, Ban collected a commission of ten cents a day from each worker.

The 1898 annexation of Hawaii proved to be a boon to Ban’s business, as Japanese workers there could now travel freely to the mainland. By the early 1900s, Ban was acting as a contractor for several railroad companies in Oregon and the West. Along with fellow labor contractors Tadashichi Tanaka and Shintaro Takaki, Ban was responsible for bringing thousands of Japanese contract laborers to Oregon; and by 1900, according to historian Marvin Pursinger, "he was the most financially prominent Japanese in the state."

An astute businessman, Ban diversified his interests. He opened three branches of S. Ban & Company in Portland, Denver, and Sheridan, Wyoming. The mercantile stores sold Japanese foods, clothing, shoes, books, and other necessities to Japanese workers. His Portland store, located in Nihonmachi (Japantown) on the corner of Northwest Third and Couch, housed a post office branch. Ban published a Japanese language newspaper, the Oshu Shimpo (Oregon News), for his workers and was actively involved in Japanese community affairs. He was one of the founders of the Portland Japanese Methodist Church, and his company sponsored a community baseball team.

Between 1890 and 1900, the Japanese population in Oregon grew exponentially from 25 to 2,501, and Japanese immigrants became targets of hostility and racism. A series of discriminatory federal laws aimed at the Japanese reduced the number of laborers who were allowed to enter the United States and led to intense competition among Japanese labor contractors. A contractors' bidding war forced Ban to reduce his commission from ten cents to five cents a day.

Further restrictions on people of Japanese ancestry put increasing stress on Ban’s business enterprises. The final blow came in 1924, when there was a run on the bank he had set up for workers. Bankrupt, Ban returned to Japan, where he died in 1926. 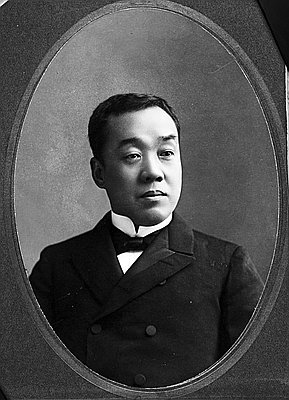 Portland's Japantown, or Nihonmachi, is popularly described as having existed before World War II in the area known today as Old Town-Chinatown, between Northwest Broadway and the Willamette River. It is not widely known that Southwest Portland had a Japantown, too. Those borders were the Willamette River on the east, West …

For early Japanese immigrants to Oregon, a Japanese-language newspaper was their only contact with the world. In Portland, Shinsaburo Ban was a major labor contractor who placed thousands of men in jobs throughout Oregon, Idaho, and states as far away as Montana and Colorado. His store, located on Northwest Third …