One of Oregon’s forty-seven federally established wilderness areas, the Salmon-Huckleberry Wilderness Area is approximately fifty miles southeast of Portland, making it one of the closest wilderness regions to a major urban area in the nation. It was one of twenty-three new wilderness designations included in the 1984 Oregon Wilderness Act, the largest addition to the state’s protected wilderness acreage since the passage of the Wilderness Act in 1964.

Originally set at 44,600 but later expanded to 61,340 acres, the Salmon-Huckleberry is a modest size, but it features three important fish-bearing streams: Eagle Creek, which drains westward to the Clackamas River; Cheeney Creek, which empties into the Salmon River; and the Salmon River itself, which bisects the wilderness. The protected area includes more than seventy miles of hiking trails, some rising more than 3,000 feet to high ridgelines, and several small lakes.

The Salmon-Huckleberry Wilderness is the result of more than a decade of study by the Mount Hood National Forest, which had identified two large blocks of roadless lands in the Salmon River watershed near Rhododendron, Zigzag, and Welches south of U.S. Highway 26. Forest analysts initially favored mixed use for a high percentage of the study areas, but environmentalists, such as Mount Hood Forest Study Group and the Wilderness Society, criticized plans for releasing too much acreage for road building and logging.

By 1983, a comprehensive Oregon Wilderness Bill that included the Salmon-Huckleberry had stalled in Congress, until the Oregon Natural Resources Council [ONRC] brought legal suit. That in turn prompted Senator Mark Hatfield and other western senators to force passage of the bill.

The ONRC focused on the Salmon-Huckleberry and other proposed wilderness areas in the bill, such as the Middle Santiam and Bull of the Woods, because they held places with significant aesthetic and ecological values. In the case of the Salmon-Huckleberry, it was the steep volcanic topography, the headwaters of important fish streams, and the pockets of old-growth Douglas-firs and cedars that made it an important area to protect.

Under the Omnibus Public Land Management Act of 2009, Congress added acreage to the Salmon-Huckleberry and created a new wilderness area, Roaring River. The new area abuts the southwest corner of Salmon-Huckleberry and provides more than 36,000 acres of roadless territory as buffer from logging and other developments. 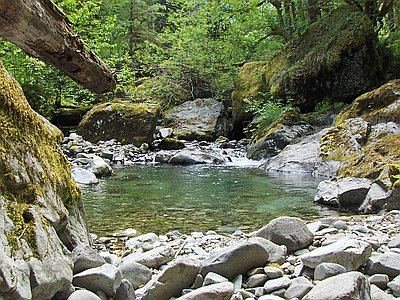