Lafayette “Lafe" Pence was a rascally sojourner to Portland who consistently made headlines during his time in the city, from 1904 and 1907. A skilled, if bombastic speaker, he was best known locally for using giant hydraulic mining hoses to sluice hills into Guild’s Lake in Northwest Portland.

A Colorado lawyer and one-term Populist representative to Congress, Pence first visited Portland in 1904 as a delegate to a mining conference (where he made news by disparaging Mormons). Months later, he returned and seized the opportunity to claim water rights to eight metro-area streams, including the Bull Run River, which the City of Portland was already using for drinking water. Pence apparently dropped claims to Bull Run water, but kept rights to Balch Creek, which runs through Macleay Park, and other streams as part of a scheme to fill in the marshy Guild’s Lake.

Pence, who planned a manufacturing center on filled-in portions of Guild's Lake, built fourteen miles of flumes into the West Hills, and through Macleay Park, despite being denied a right-of-way permit. As chair of the Parks Board, L.L. Hawkins was determined to protect Macleay Park from Pence, whom he described as "a mischief maker from the ground up." Unfortunately, Hawkins soon died.

In 1906, Portland Mayor Harry Lane dramatically sent city police to smash a portion of the flume, which turned out to be outside park boundaries. The next day, Lane, not wanting to impede outside investment in the city, about-faced and stated his support for Pence’s development plan. Later, over the objections of some neighbors and park supporters, the parks board granted Pence a permit.

Acting as a frontman for local and national businessmen, in 1906 Pence purchased the closed fairgrounds from the 1905 Lewis and Clark Exposition, adjacent to Guild’s Lake. He washed about 200,000 cubic yards of soil into the lake before his business went under in a 1907 bank panic. The sluicing and filling project was taken over by the Lewis and Wiley Company, which created a fifty-acre industrial center on filled-in land.

Pence, who never really called Portland home, took leave of the city. Records of his subsequent life are elusive, but include sensationalized reports in the New York Times of his 1914 divorce, including charges of Pence's infidelity with a society matron. 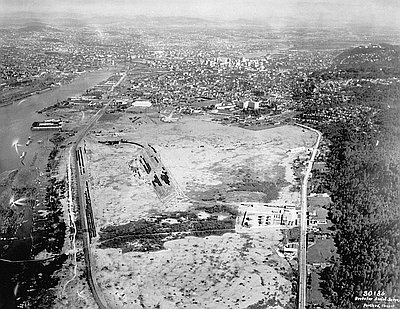 Today, the curve of St. Helens Road in northwest Portland skirts the edge of a shoreline that no longer exists, leaving a visual echo of a riparian marsh once located there. The crescent-shaped marsh, known as Guild's Lake, was likely an oxbow cutoff of the Willamette River formed by changes …