Today, the curve of St. Helens Road in northwest Portland skirts the edge of a shoreline that no longer exists, leaving a visual echo of a riparian marsh once located there. The crescent-shaped marsh, known as Guild's Lake, was likely an oxbow cutoff of the Willamette River formed by changes in sediment deposits and river flow. It was fed by hillside runoff and linked to the equally marshy Kittredge and Doane lakes. The lake was named for settlers Peter and Elizabeth Guild (pronounced "guile") and was the setting for the 1905 Lewis and Clark Exposition.

At approximately 250-acres, Guild's Lake remained connected to the Willamette River by an underground water table, and it rose and fell with seasonal fluctuations. Balch Creek meandered out of a canyon into Guild’s Lake until city workers diverted it into an underground sewer pipe in the early twentieth century.

In 1905, to prepare the area for the Lewis and Clark Exposition, contractors flattened slopes and deepened the lake by damming its outlet and pumping in water. After the fair closed, the lake reverted to its natural shallow, marshy state. The February 12, 1906, Oregonian reported that the "bare mud flat" became less appealing to Portlanders who visited the site. An effort by some prominent Portlanders to save the fairgrounds and marsh as a park failed to get much support.

In 1905, land developer Lafayette Pence began filling in Guild’s Lake for industrial use, using giant mining hoses to sluice dirt from nearby hillsides. Two years later, the Lewis and Wiley Hydraulic Company took over the development project and by 1913 created a fifty-acre industrial center on filled-in lakeshore land. In the early 1920s, the Port of Portland worked with area landowners to fill in the rest of Guild’s Lake and adjoining wetlands with silt dredged from the Willamette River.

The Northern Pacific Terminal Company established a railcar switching yard on newly filled land in the 1920s, but the Depression and World War II delayed extensive development. During the war, the Housing Authority of Portland built temporary housing on the fill to accommodate a large influx of workers to the city. Industries moved into the area in the 1950s. In 2001, the Portland City Council adopted the “Guild’s Lake Industrial Sanctuary Plan” to protect 1,625 acres in Northwest Portland from nonindustrial use. 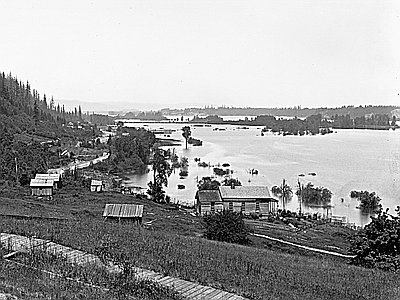 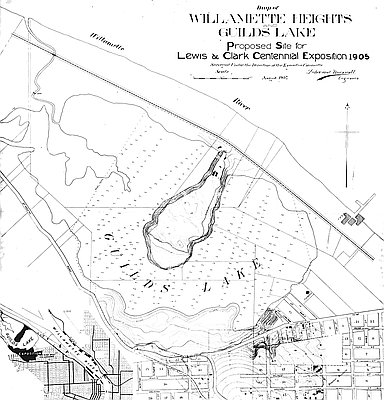 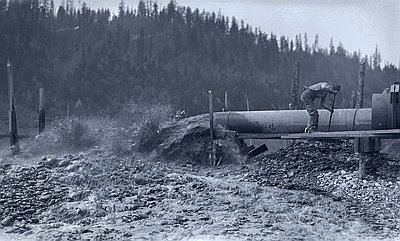 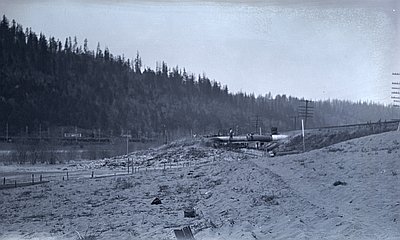