Pacific Stoneware may have been the longest-running commercial pottery manufacturer in Oregon. Begun as Pacific Pottery in 1890, the company produced ceramic and stoneware at its headquarters near Guild’s Lake in Northwest Portland and later in Kenton (North Portland), until it closed in 1986. Pacific Stoneware boasted that it was the first steam-powered pottery manufacturer on the West Coast and, according to a letter to customers, produced “more stoneware than all other Coast plants combined, and more flower pots than any other plant in the Northwest.” It was also reportedly the first pottery manufacturer in the West to incorporate modern machinery and processes into its production.

Charles Hegele, Louis P.R. Le Compte, and manager Charles W. Borders opened Pacific Pottery in 1890 at 687-695 Sherlock Avenue in Portland’s northwest industrial area. Hegele was an investor and entrepreneur, and he and Le Compte co-owned a wholesale crockery and glassware business on Front Street in Portland. Thomas Mann had been a bricklayer before coming on board as vice president in about 1900. By 1909, he was president of the business, which he reincorporated as Pacific Stoneware.

Initially, the company focused on utilitarian products such as bed warmers, crocks, stoneware jugs, poultry fountains, thimbles, butter churns, and flowerpots. These products were shipped to markets as far away as Los Angeles, Anchorage, Boise, and Honolulu. While the company’s product line evolved somewhat, its focus on utilitarian goods remained for fifty years.

In 1920, the Sherlock Avenue building burned down when sparks from the kiln chimney landed on the wooden roof. A new plant was built on the same spot in 1923. The factory was moved in 1929 to its final location on the corner of North Peninsular Avenue and Columbia Boulevard. Both locations were adjacent to rail lines, since clay and ceramic goods were primarily shipped by rail.

Although the company relied on modern, industrial methods to mass produce commodity stoneware, their talented potters’ artisan work was exhibited in the Oregon Building at the 1915 Panama-Pacific International Exposition in San Francisco. Those pieces included vases glazed in various colors—a contrast to the brown, milk white, and cobalt glazes of the utilitarian commodities that formed the bulk of Pacific Stoneware’s products.

World War II took its toll on the company, as federally imposed restrictions on commerce as well as shortages of labor and materials nearly brought production to a halt by 1943. Feldspar, a ceramic flux (a chemical that helps the silica in clay and glaze to liquefy completely), was difficult to obtain, as the wartime labor shortage shut down many of the mines, and the unionization of the company’s labor force in 1947 apparently added to its financial woes.

In 1959, Pacific Stoneware filed for bankruptcy and shut its doors. The following year, Bennet Welsh, a thirty-seven-year-old ceramicist at Tektronix, bought the company for $33,000. He had studied pottery at the Museum Art School (now the Pacific Northwest College of Art) and had aspirations to be a studio potter. Welsh put much of the old line of butter churns, crocks, and flowerpots back into production and began to manufacture artistic homewares such as vases, casserole dishes, and mugs in the folk style popular in the 1960s and 1970s. The wares were made by beginning and student potters who worked at Pacific Stoneware to learn production pottery.

In the mid-1960s, under Welsh’s leadership, the potters of Pacific Stoneware used fifteen tons of Clatsop County clay every day—nearly one million pounds per month. Wares were distributed through local retailers Fred Meyer and Meier & Frank, as well as through national chains Neiman Marcus and May & Co. The company also operated two retail stores in Portland, one in Eugene, and another in Seattle.

In 1964, ceramicist Florence Jean Ellsworth designed the People Lovers line for the company. Consisting of flat slabs of clay cut into the shapes of people and animals and colorfully decorated, People Lovers wares were intended to be hung on walls or under overhangs. It was a breakthrough design for the company, as the pieces were not only wildly popular but also were quick and inexpensive to produce, and the company’s focus shifted away from flowerpots and crocks to People Lovers products.

When Welsh retired from the business in 1973, the company continued to operate under the ownership of James William Romanick. Pacific Stoneware closed its doors for good in December 1986. Its final advertisement in the Oregonian announced that the “103 year ceramic mfg. was quitting business” and offered “wind chimes, planters, vases, wine carafes, etc.” in a liquidation sale. 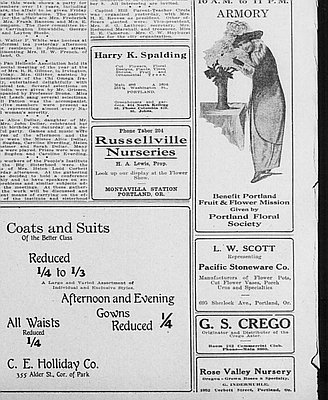 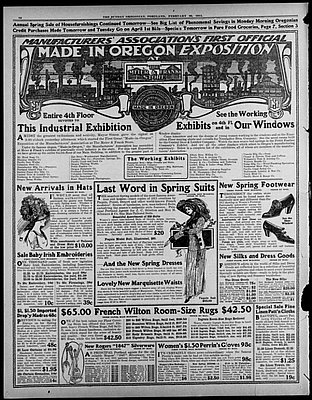 Gaston, Joseph. Portland, Oregon, its history and builders: in connection with the antecedent explorations, discoveries and movements of the pioneers that selected the site for the great city of the Pacific. Vol. 3. Chicago, IL: S.J. Clarke Pub. Co., 1911.