A caring clinician, careful researcher, and inspirational teacher, Edwin E. Osgood made lasting contributions to hematology and experimental medicine. A native of Fall River, Massachusetts, Osgood first came to the University of Oregon Medical School (UOMS) in 1918, joining both the student body and the staff as an assistant in biochemistry. He received his masters and M.D. degrees in 1924 and was appointed to the faculty as director of laboratories in 1928. In 1936, he was made head of the newly formed Division of Experimental Medicine, becoming the only physician on the full-time faculty.

Osgood’s tenure in Oregon was long and fruitful. He performed one of the first bone marrow aspiration analyses in the United States, and was the first to establish normal values for specimens, improving our understanding of abnormal blood cell production in disease. In 1936, with student Inez E. Brownlee, he developed a method for culturing human bone marrow outside the body. This advance was hailed by the American Medical Association as “a development with more promise than the artificial heart.” In 1939, Osgood applied what he had learned about bone marrow to therapy and attempted the first bone marrow transplant on a patient with aplastic anemia.

Osgood studied the life span of white blood cells and paved the way to the development of a method for culturing these cells in the diseased state known as leukemia. In 1941, he began using a type of controlled radiation therapy for leukemia patients. In 1957, he presented a unifying hypothesis of the cause of cancer, proposing that the absence of regulating chemicals that normally control cell growth might be responsible. His hypothesis brought together multiple hypotheses then in vogue, almost all of which focused exclusively on types of cell damage that could cause cell proliferation. Twenty years later, after the development of newer bone marrow culturing techniques, Osgood’s malignancy hypothesis was confirmed.

In 1962, Osgood’s team was the first to successfully unwind a human chromosome by placing blood cells in a solution, making it possible to study the structure of this basic unit.

At some point in his career, Osgood taught nearly every class at UOMS, and he oversaw clerkships six days a week from 1924 to 1946. He once remarked that medical education is “like trying to build a skyscraper on the foundation for a hut”— without the proper grounding in the basic sciences, students won’t understand why certain concepts are important.

Osgood officially retired from the medical school in January 1969 and died the following October. At that time, Dean Charles Holman remarked: “I know of no one who has been any more dedicated to medical education and medical science…and his work here at the Medical School…has had a significant influence on our teaching, research, and patient care programs.” 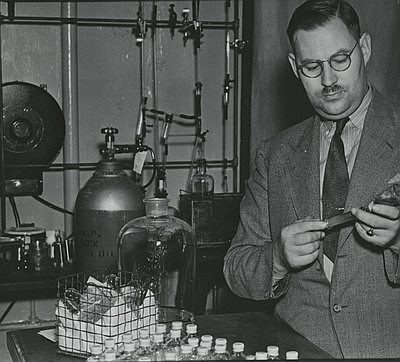