In 1934, Oregon amended its constitution to allow for non-unanimous jury verdicts in criminal cases, excluding those cases where a defendant is on trial for first-degree murder, making it one of only two states (along with Louisiana) that allowed non-unanimous jury convictions in criminal felony cases. All other states and the federal government required that jury verdicts be unanimous in such cases. The non-unanimous jury rule, passed as a ballot measure in 1934, was a result of social conditions and a notorious murder trial and was intended, at least in part, to dampen the influence of racial, ethnic, and religious minorities on juries.

The trial involved Jacob Silverman, a hotel proprietor in Portland, who was charged with the murder of Jimmy Walker near Scappoose in April 1933. During jury deliberations, eleven jurors wanted to find Silverman guilty of first-degree murder, but one did not, so they compromised by finding him guilty of manslaughter. Many Oregonians were outraged at the lesser verdict, and the Oregon legislature proposed a constitutional amendment less than a month after Silverman was sentenced.

In the 1934 Voter Pamphlet published by the Secretary of State, advocates for the change argued that the amendment would “prevent one or two jurors from controlling the verdict or causing a disagreement,” results that can be costly to taxpayers and can cause congestion in the courts. Local news outlets supported the amendment by citing corrupt jurors and untrained immigrants as the cause of hung juries. “The increased urbanization of American life,” the November 25, 1933, Oregonian editorialized, “and the vast immigration into America from southern and eastern Europe, of people untrained in the jury system, have combined to make the jury of twelve increasingly unwieldy and unsatisfactory.” The only argument against the amendment noted the irony of excluding the most egregious crimes from the less burdensome non-unanimous jury (increasing the likelihood of acquittal for first-degree murder) and suggested higher pay for district attorneys (who supported the measure) in order to attract competent lawyers to the job.

Oregonians approved the amendment with 58 percent of the vote. As a result, Article 1, Section 11 of the Oregon Constitution directs that “in the circuit court ten members of the jury may render a verdict of guilty or not guilty, save and except a verdict of guilty of first degree murder, which shall be found only by a unanimous verdict, and not otherwise.”

The Sixth Amendment to the U.S. Constitution guarantees rights to the accused in a criminal prosecution, including the right to a trial by jury, but it is silent as to whether a jury verdict must be unanimous. In 1968, the U.S. Supreme Court addressed the issue of non-unanimous juries in Duncan v. Louisiana, ruling that the right to a jury trial is a fundamental right to be incorporated against the states by the Fourteenth Amendment and that unanimity is a characteristic of that right. (The incorporation doctrine is a constitutional doctrine through which provisions of the Bill of Rights are made applicable to the states through the Due Process Clause of the Fourteenth Amendment).

Yet, four years later, in Apodaca v. Oregon (1972) and Johnson v. Louisiana (1972), the U.S. Supreme Court declined to require unanimity in state criminal cases. In Apodaca, the Court held that state juries may convict a defendant by less than unanimity even though federal law requires federal juries to reach criminal verdicts unanimously. The opinion was split. Four Justices found that the Sixth Amendment did not mandate unanimity, while four Justices found that it did and that the Fourteenth Amendment incorporated the requirement against the states. Justice Lewis Powell, writing alone and deciding the outcome of the case, found that the Sixth Amendment required unanimity in federal cases but not in state cases.

The split court in Apodaca was important, because there was still debate over whether non-unanimous jury verdicts violate a criminal defendant’s constitutional rights. Advocates argued that all states, including Oregon, should be subjected to the unanimous jury requirement in accordance with the U.S. Constitution because it is a right provided by the Sixth Amendment and ensures that the burden of proof beyond a reasonable doubt is met. They also argued that not only do non-unanimous jury verdicts infringe on Oregonians’ constitutional rights, but they also lead to the conviction of innocent defendants and disregard minority juror viewpoints.

The U.S. Supreme Court ruled on April 20, 2020, in Ramos v. Louisiana, that the Constitution banned non-unanimous jury verdicts in criminal cases. The decision will affect defendants and prisoners in Louisiana and Oregon, the only two states that have allowed such verdicts. Despite these state provisions, there has never been any dispute that the unanimous jury requirement applies to the federal government. The question in Ramos v. Louisiana was whether that aspect of the Sixth Amendment right to a jury trial applied to the states, as well. Over the last 75 years or so, the Court has applied just about every other provision of the Bill of Rights to the states, but in 1972 it deviated from that practice, declining to apply the unanimous jury requirement in a similar fashion. In Ramos v. Louisiana, however, the 1972 decision was rejected. The six-justice court majority — composed of conservatives and liberals — said the earlier ruling was a mistake. In reaching its decision, Justice Neil Gorsuch, writing for the majority, laid out the history behind the laws in both states. In Oregon, the adoption of the non-unanimous jury rule, Gorsuch wrote, "can similarly be traced to the rise of the Ku Klux Klan and efforts to dilute the influence of racial and ethnic and religious minorities on Oregon juries." 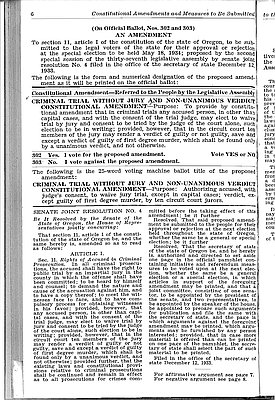 Excerpts from the 1934 Oregon Voter Pamphlet

The Fourteenth Amendment to the U.S. Constitution declared that the federal government would guarantee the rights of citizenship to "all persons born or naturalized in the United States." No state could "deprive any person of life, liberty, or property, without due process of law; nor deny to any person within …

In 1994, Oregon voters were the first in the nation to approve an act that allows a physician to prescribe a lethal dose of medication to a terminally ill patient for the purpose of self-administration. This practice is called physician-assisted suicide, physician-assisted death, or physician aid-in-dying.

Eligible patients must be …