When commercial traders refused to stop in Tillamook in the mid-nineteenth century because of the difficult entrance to the bay, the white settlers of Tillamook County found themselves without access to the Portland and Astoria markets. Residents were required to find new means of importing goods and transporting their dairy products.

In September 1854, fearing starvation because of their diminishing provisions, they began constructing a new vessel. Every member of the community helped assemble the first ship built in Tillamook County and registered in Oregon. Building supplies were gathered from local timber and salvageable remnants of local shipwrecks.

After a good deal of hard work by an eager community, the ship was completed on December 29, 1854. It was christened Morning Star in the belief that the ship was the harbinger of a new day for Tillamook County. The first attempt to launch the ship on skids greased with estuary mud failed, as the vessel remained stationary due to too little grease. After sacrificing a steer to make some tallow, the ship was finally ready for its maiden voyage on January 5, 1855.

Carrying tons of dairy products and seafood, the two-masted Morning Star sailed through stormy waters to Astoria and Portland. After unloading the goods from Tillamook and collecting the necessary supplies, the ship returned safely to its home port.

The Morning Star ensured the survival of Tillamook County and continued to service Tillamook for a year and half until it was sold to pay off the debt of one of the owners. The ship was eventually sold to Leonard and Green of Astoria and then sold to shipping interests in Olympia, Washington; in 1860, it was wrecked in the Straits of Juan de Fuca.

In February 1959, construction of a replica of the Morning Star began as a way to commemorate the Oregon Centennial. Once again, a group of volunteers from Tillamook County worked together to complete the Morning Star II, recreating the community spirit evident during the construction of the original ship. The project was completed in late July 1959. The ship sailed from Tillamook Bay, following the original route to Astoria and up the Columbia and Willamette Rivers, loaded with six tons of cheese. Axel Anderson of Bay City served as skipper on this voyage.

The Morning Star II arrived at the Oregon Centennial Exposition in Portland on August 22, 1959, just in time for Tillamook County Day. Free tours of the ship and samples of Tillamook cheese were offered. After the festivities concluded, the vessel returned to Tillamook and eventually was put on display at the Tillamook Creamery. In 1992, it was replaced by a smaller scale replica, built by master shipwright Richard Miles of Aberdeen, Washington.

Though not directly related to the true account of the Morning Star, Oregon novelist Don Berry—in To Build a Ship—tells the story of a group of early settlers in the Tillamook Bay Valley battling the wilderness who build their own schooner to escape their isolation. Berry explores the extent to which a man can betray himself and his morality for an obsession—a drama of men pushed to the point of madness.

The Morning Star played an important role in strengthening the community of Tillamook and establishing the dairy industry in Tillamook County. When the packaging for the Tillamook County Creamery Association was redesigned in 1966, a rendition of the ship was part of the new label. 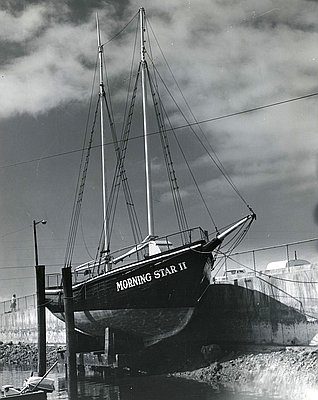