Milton-Freewater, a city of about 7,000 people, is located at the foot of the Blue Mountains in northeast Oregon. Seven miles from the Oregon-Washington state line, Milton-Freewater is situated in the Walla Walla Valley, just ten miles from Walla Walla. Farmers in the area benefit from the area’s warm summers and mild winters. It receives 16.51 inches of rainfall a year, topping other major regional centers such as John Day (13.20 inches) and Baker City (10.15 inches). Crops include apples, apricots, cherries, strawberries, and other fruits and vegetables, which are canned and shipped throughout the world. At one time, Milton-Freewater was dubbed the “pea capital of the world.”

The roots of Milton-Freewater date to 1872, when Texas émigré William Samuel Frazier plotted the townsite of Milton to supply those traveling the forty miles between Pendleton to the south and Walla Walla to the north. There are various theories about how Milton was named. Some sources suggest that Frazier was referring to poet John Milton, while others believe it was named after Milton, New York, or to delineate it as a “mill town.” By the early 1880s, 400 people lived in Milton, which incorporated in 1886. Some residents, disgruntled about the strict temperance laws that Frazier imposed on the town, split off and founded Freewater in 1889. Located just northwest of Milton, Freewater was so named because city boosters promised a free supply of drinking water to attract residents.

Agriculture in the two towns was supported by the railroad line that operated in the region from the late nineteenth century through much of the twentieth. In 1907, the Walla Walla Valley Traction Company (later called the Walla Walla Valley Railroad) inaugurated an interurban line between Milton and Freewater to Walla Walla, connecting its goods and people to the rest of the nation for the first time. As automobile travel replaced interurban passenger travel, the line primarily transported wheat, fruits, and vegetables from the valley by the 1930s.

During the Great Depression, the Walla Walla Valley Railroad (WWVR) played a major role in establishing the canned-foods industry in Milton, ultimately persuading the P.J. Burke Canning Company, one of the largest canneries in the region, to build a plant on an exclusive WWVR spur in Milton. For fifty years, the cannery was one of the largest shippers on that spur and a prime employer in Milton and, later, in Milton-Freewater. By the late 1950s, however, truckers had cut into the WWVR’s business, as Oregon Highway 11 connected the city to Walla Walla and Pendleton and Interstate 80-North (the predecessor to Interstate 84). The WWVR ceased operations in 1985.

Talk of consolidating Milton and Freewater became serious in 1947, when returning World War II veterans formed a group called the Consolidation Club. The organization pointed out that the adjoining towns were duplicating police, fire, and electrical services and that a united city would reduce the cost of government to taxpayers. Combining the two towns into one city also would increase its ability to attract new industry and extend recreational and postal services.

Most Milton residents supported consolidation, but Freewater residents were more resistant, fearing the loss of the city’s Bank of Commerce and its hookup to Pacific Light and Power (Milton’s utility company was municipally owned). In May 1950, the Umatilla County Circuit Court rejected appeals from Freewater officials to prevent a consolidation election, which took place on November 15. Freewater narrowly approved the merger, 240-204, while Milton more enthusiastically voted to unite the two cities, 464-167. As a result of the consolidation, 3,850 people lived in the new city of Milton-Freewater.

In recent decades, Milton-Freewater has faced challenges similar to other rural Oregon communities: the decline of agriculture, as foods grown abroad compete with an increasing domestic food supply; the rise of tourism, which has only partly supplemented the older extractive economy; and greater ethnic diversity, which has brought both rejuvenation and challenges. In 2015, The Rocks District of Milton-Freewater, so named because of the pebbles found in the valley soil, was declared an American Viticultural Area. The designation was intended to help Oregon vintners in and near Milton-Freewater challenge Walla Walla’s domination of the regional wine and tourism industries.

In recent decades, growing numbers of Latinxs from Mexico and other parts of the United States have moved to Milton-Freewater. As in other parts of the Pacific Northwest, most migrants to the Walla Walla Valley intended to stay temporarily to help harvest crops, but many have become permanent residents. In 2018, Milton-Freewater appointed its first Latinx city council member, reflecting the growth of the Latinx population to nearly 50 percent of the city. In recent years, white and Latinx residents joined together with local Native tribes to attract tourists and investors to the area with the annual Milton-Freewater Rocks! festival and is working to revitalize the city’s historic downtown as part of the Oregon Main Street Program. 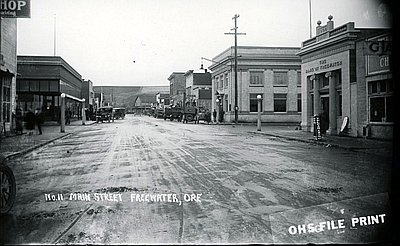 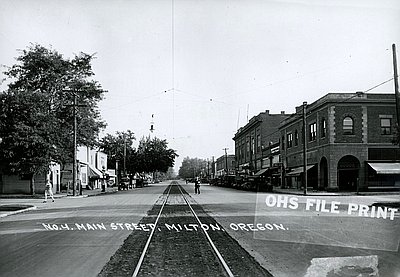 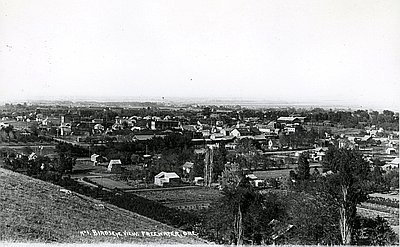 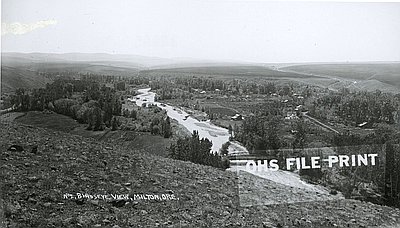 Pendleton, a city of 16,810 in the 2018 census, sits in the foothills of the Blue Mountains. The city center is built on the south bank of the Umatilla River, which runs roughly east and west through town. Pendleton’s motto is “The Real West,” and it prides itself on its …

In 1907, the Walla Walla Valley Railway built a fourteen-mile electric railway from its terminal on 6th Street in downtown Walla Walla, Washington, to Milton-Freewater, Oregon. The company, which also operated the city streetcar system in Walla Walla, had joined a national frenzy of interurban railway construction.