Joseph L. Meek, a mountain man, storyteller, and public personality, played a significant role in bringing Oregon into the United States in 1846-1848. A politician and a legislator in territorial Oregon, he helped ensure that Oregon became a free state in 1859, on the eve of the Civil War.

Meek hailed from rural western Virginia. He grew up in a poor but respected family, but little is known of his youth. In 1828, he journeyed to St. Louis, Missouri, entering the fur trade as a "greenhorn" employee of Jedediah Smith, David Jackson, and William Sublette. The three were former "Ashley men" whose company had energized the Rocky Mountain beaver trade and boosted public interest in the Oregon Country. Meek worked for Smith, Jackson & Sublette from 1828 to 1830, when he went to work for its successor the Rocky Mountain Fur Company, which failed in 1834.

Meek's fur-trade career coincided with the peak years of what was known as the "rendezvous system" (1825-1840), and his travels through the Rockies and the Pacific Northwest resulted in close relationships with well-known trappers, including Christopher Houston "Kit" Carson, Thomas Fitzpatrick, Robert "Doc" Newell, George Ebberts, Ewing Young, and the Sublette brothers. During the 1830s, Meek also befriended and assisted Oregon Protestant missionaries, notably the Whitman-Spaulding party.

Like many trappers, Meek entered sequential marriages with three Native women and had mixed-blood children. His beloved Nez Perce wife, Umentucken (Mountain Lamb), was killed by enemy Indians. A second wife left Meek because he was often drunk. In 1838, he married a Nez Perce woman whom he called Virginia; they stayed together until Meek died decades later. In 1856, the Meek family included three daughters and four sons.

By 1840, admitting that "the fur trade is dead in the Rocky Mountains, and it is no place for us, if it ever was," Meek and Robert Newell decided to settle in Oregon and become farmers. While en route to the Willamette Valley, Meek placed a daughter, Helen Mar, in the care of missionaries Marcus and Narcissa Whitman at Waiilatpu. In 1847, the child succumbed to measles, becoming a collateral casualty in the violence that doomed the mission, known as the Whitman Massacre.

Meek helped settle the estate of Ewing Young in 1841, which brought Anglo American judicial principles to bear in Oregon and prompted the meetings that led to forming a provisional government. and thus brought United States law to Oregon Country. In 1843, he helped organize Oregon’s first de facto territorial government. Like other mountain men and French Canadian voyageurs who retired in what was called Old Oregon, however, the Meeks and their children endured discrimination and bigotry from white Christians. The missionaries’ general contempt for Indians and for those they called "half-breeds" also applied to the "godless rabble" of the former mountain men.

Early in February 1848, Meek and several companions traveled to Washington, D.C., to prod the government into taking immediate action to secure Oregon for the United States. President James Polk's wife, formerly Sarah Childress, was Meek's second cousin, and his interview with the president produced results. Rubbing shoulders with presidential staffers, congressmen, and a few mountain men, Meek regaled his hosts with the Rocky Mountain tall tales that later made him famous. Congress passed and President Polk signed legislation that made Oregon a territory in August 1848.

Respected for his integrity and common sense, U.S. Marshal Meek occasionally served as unofficial territorial governor over the next critical years in Oregon. Although he associated with Oregon Democrats, when the Civil War broke out he remained a firm Union man, asserting that if he lived in Virginia, he would "Rais A Company and go to war for my Countrey."

In 1866, Meek met Francis Fuller Victor, a well-known writer who recently had moved to St. Helens. Victor developed a fascination for Meek, who was locally renowned as a storyteller and hilarious orator. Supplementing Meek's own memoir with interviews, Victor's and Meek’s collaborative biography, The River of the West, was published in 1870. Victor crafted a gem of fur-trade historical literature, brimming with Meek’s tales of the beaver trade and delightful vignettes delivered in the unvarnished jargon of the mountain men.

Meek spent his last years giving lectures and promoting his book. Worn down by old age, legal problems, and book tours, he died at his home near Hillsboro in June 1875. 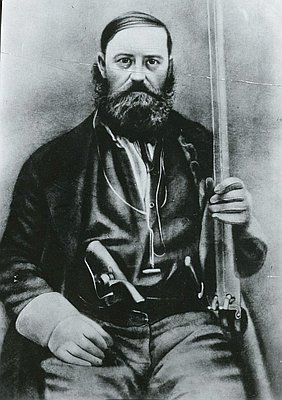 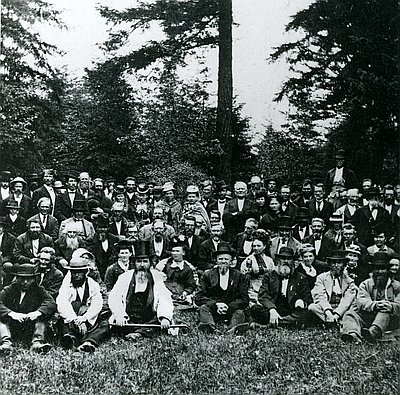