A generation after his death in 1974, Reuban A. "Reub" Long still figures in Oregon lore as the "Sage of Fort Rock," the pre-eminent storyteller and chronicler of the High Desert country.

Long was born in Lakeview in 1898, the son of Lon and Mary Long. In 1900, the family moved into a log house on a homestead claim near Christmas Lake, where his father tried to run cattle and to eke out a living. Mary Long "kept travel," providing meals and lodging for freighters and travelers on the four major wagon roads that intersected near their place.

Early on, Reub did a man's work, mainly on horseback. His formal education ended with the eighth grade, but he later remembered that "my schooling was limited, but my education long and thorough. Horses kept running through it, teaching me something every day." Once on his own, he and his wife Eleanor added land to the ranch until it covered several thousand acres in Fort Rock Valley, including part of Fort Rock itself.

During and after the Depression, Long kept the ranch going by raising cattle and horses, sheepherding, trapping, dry farming, packing for the Forest Service, and dude-wrangling. In the 1950s, he was a "movie wrangler," supplying horses, gear, and know-how for two major Hollywood movies filmed south of Bend, Canyon Passage and The Indian Fighter.

In 1938, a University of Oregon team led by Luther Cressman excavated Fort Rock Cave, on the Long property, and discovered artifacts that were dated at more than 9,000 years old. Further excavation revealed evidence of human presence at the cave as far back as 11,000 to 13,000 years ago. Reub donated his portion of Fort Rock, including the Cave, for the creation of Fort Rock State Natural Area.

A pioneer range conservationist, Long began working in the 1940s with E.R. Jackman, an agronomist from Oregon State College. Out of their friendship came The Oregon Desert (1964), a book about the region's natural history and its people. Running irresistibly through Long's chapters (and often spilling into Jackman's) are anecdotes, tall tales, and pithy sayings about early life in the desert. Here is one example: "The reason I've been able to produce some fast horses is that, where I graze them, they have to feed at thirty miles an hour to get enough to eat."

For every Reub Long tale or saying recorded in The Oregon Desert, his neighbors and friends can recall many more. For example, a visitor to Reub's spread asked about two big power lines running north-south and parallel to each other, about a mile apart. He explained, "Well, this first one carries electricity to California, and the other brings it back."

Over the years, Reub Long was a member of the BLM Advisory Board, the State Board of Agriculture, and the Oregon State University Foundation Board. He was also president of the Deschutes County Historical Society. But many would say that it is the wry, good-humored, authenticvoice of the High Desert that people remember best. 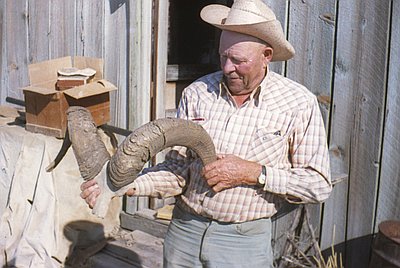 Fort Rock Cave is located in a small volcanic butte approximately half a mile west of the Fort Rock volcanic crater in northern Lake County. Near the end of the Pleistocene, a massive lake filled the Fort Rock Basin, and erosion from wind-driven waves carved the cave about seventy-five feet …