Fort Rock Cave is located in a small volcanic butte approximately half a mile west of the Fort Rock volcanic crater in northern Lake County. Near the end of the Pleistocene, a massive lake filled the Fort Rock Basin, and erosion from wind-driven waves carved the cave about seventy-five feet deep into soft rock. The large lake was gone by the time people arrived, but remnant small lakes, ponds, and marshes remained on the basin floor in front of the south-facing cave which provided favorable habitat for game, waterfowl, and edible plants.

In 1938, University of Oregon archaeologist Luther Cressman excavated at Fort Rock Cave, where he and his crew found dozens of sandals below a layer of volcanic ash, subsequently determined to have come from the 7,600-year-old eruption of Mount Mazama.

Cressman believed that the Fort Rock sandals were ancient, a claim that many of his colleagues dismissed. When the radiocarbon dating method was developed a dozen years later, however, the new technique proved the sandals to be more than 9,000 years old, the oldest directly dated artifacts in North America at the time.

Fort Rock sandals are stylistically distinct. They are twined—that is, pairs of weft fibers are twisted around warps—and have a flat, close-twined sole, usually with five rope warps. Twining proceeded from the heel to the toe, where the warps were subdivided into finer cords and turned back over the top of the sole where open-twine weaving continued to form a toe flap. The sandal was secured to the foot by a series of interlocking loops attached to the sole that were cinched around the ankle with a cord.

Named for the site where they were first found, Fort Rock-style sandals have since been reported from ancient deposits at more than a half dozen other dry caves in the Northern Great Basin region of southeast Oregon and northern Nevada. Fibers from more than twenty Fort Rock-style sandals from a half dozen different sites have now been directly dated, and all are between about 10,500 and 9,100 years old.

Most of the sandals from the cave are heavily worn, and many are fragmentary, supporting the idea that they were discarded rather than stored for later use. Present at the site were large adult and small child-sized shoes, some caked in mud, some worn through at the balls of the feet, some with tiny char marks on the toe flaps from a sparking hearth fire. Viewed together, the many sandals from Fort Rock Cave reflect the multigenerational extended family that made the cave their home 10,000 years ago.

Fort Rock cave may have been a winter residence during the time the sandals were made, and the residents probably made a shelter within the cave to conserve heat and as a protection from cold winds. The sandals were likely winter wear. In more recent times, the Klamath Indians made woven sandals stuffed with dry grass that provided comfort when walking in icy marsh waters.

In 1966 and 1967, Cressman and his graduate student Stephen Bedwell returned to Fort Rock Cave and several other sites in the Fort Rock Basin. By that time, the interior of the cave had been effectively cleaned out by artifact hunters, and the only undisturbed deposits were under large rock-fall boulders near the cave entry, which were removed with dynamite and a tractor.

Bedwell recovered sandal fragments, but his most significant finding was a small set of tools, including a handheld grinding stone, chipped stone scrapers, and a stemmed projectile point which appeared to be associated with a small hearth that produced a radiocarbon age calibrating to more than 15,000 years old. Most archaeologists dismissed this age, citing uncertainty about the association between the artifacts and the dated charcoal and what was considered to be an unreasonably early age for human occupation in the Americas. Although the question of association remains clouded, the confirmed presence of human occupation at the nearby Paisley Caves to nearly 15,000 years ago provides a context that makes the outright dismissal of the early Fort Rock age ill advised.

Cressman reported that deposits above the Mount Mazama ash had been subject to an extensive smoldering fire, and all organic material incinerated. Thus, the early occupations at Fort Rock Cave are best known, but radiocarbon dates on some small twined basketry fragments indicate some limited use during the last ca. 5,000 years. These later site visits may have been largely short-term and ephemeral.

Fort Rock Cave was designated as a National Historic Landmark in 1961. The cave and surrounding area were acquired by the Archaeological Conservancy in 1998 and transferred to the State of Oregon. The site is now managed by the Oregon Department of Parks and Recreation. Access to the site is across private land, and visits by the public must be scheduled with a state park guide. 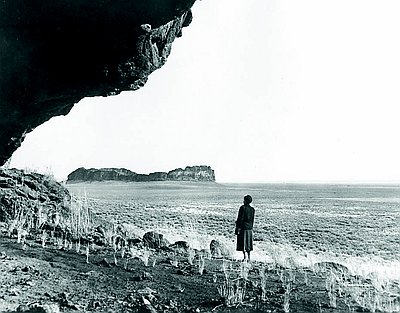 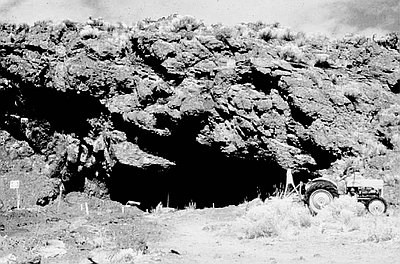 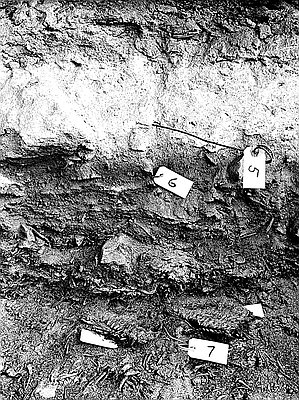 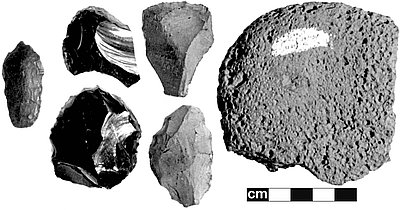 Known as the father of Oregon archaeology and anthropology, Luther Cressman conducted pioneering archaeological work in the 1930s through the 1960s and established the broad outlines of Oregon’s ancient human history and occupation by Native peoples. He helped establish the anthropology department at the University of Oregon and supervised the first …

The Paisley Caves—more formally known as Paisley Five Mile Caves—in south-central Oregon are among the oldest archaeological deposits in North America. The seven creases that create the caves were etched into a low basalt ridge during the ice age by waves moving across Lake Chewaucan.