Kathryn Clarke, the first woman to serve in the Oregon Senate, made worldwide news for her accomplishment. She was born in Douglas County in 1873, the daughter of John and Catherine McGregor Clarke, who had come to Oregon from Canada. She was born in the same year as her cousin, Oswald West, who would be elected governor of Oregon in 1910. The Clarke family was in the hotel business in Roseburg and Glendale. When she completed school, Kathryn followed in the family enterprise and managed the hotel in Glendale.

Women in Oregon achieved the vote in 1912, and the November 1914 elections were the first in which women were eligible to seek office in the legislature. That year, Jackson County voters elected Marian B. Towne as the first woman to serve in the Oregon House of Representatives. Douglas County voters reelected State Senator George Neuner Jr., but he resigned in early January 1915 to become district attorney. Governor Oswald West offered the post to Douglas County judge Dexter Rice.

Many questioned whether West had the authority to appoint someone to the vacancy. In the midst of the debate, Rice declined and West appointed Kathryn Clarke to the post. There were still concerns about West’s power to appoint; and with the upcoming legislative session slated to begin January 11, county officials set a special election for January 20 to decide the seat. Clarke filed her candidacy as a Republican on a platform of saving taxpayer dollars and supporting law enforcement. After mass meetings in Douglas County and an endorsement by her city newspaper, Clarke won the special election by 76 votes.

Two other women were elected as state senators in the United States that year, Helen Ring Robinson of Colorado and Frances Willard Munds of Arizona. The three were featured in the International Woman Suffrage News and the Woman’s Journal and Suffrage News as examples of women taking the next step in citizenship after gaining the right to vote.

As a senator, Clarke supported Douglas County with bills to amend county boundaries, raise salaries for county treasury employees, and address property and homestead concerns. In 1915, she became a member of the Oregon branch of the Congressional Union for Woman Suffrage and began to work for the passage of a federal woman suffrage amendment.

After completing her term, Clarke relocated to Pasadena, California, to live with her sister and to work in a large department store. She died on August 19, 1940. 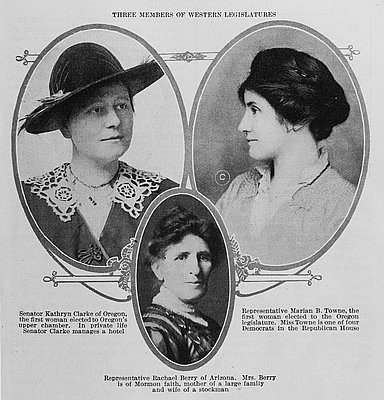 As the first woman elected to the Oregon House of Representatives (1914), and one of the first women in the state to serve with the Naval Reserve Corps in World War I, Marian Towne was a leader in expanding opportunities for Oregon women in the early twentieth century.

Mattie Cone Sleeth was a significant force for change in Oregon during the early decades of the twentieth century. A devoted minister’s wife, she arrived in Portland with her family in 1903 and established herself as a leader of the Oregon Woman’s Christian Temperance Union (WCTU). She was an ardent …

Sarah A. Evans epitomized the characteristics of clubwomen of the United States from the 1890s to World War II. A leader in Oregon reform efforts, she left a strong legacy of activism for women and Progressive Era causes in Oregon.