Oswald D. West served as Oregon's fourteenth governor, between 1911 and 1915. Best known as the catalyst for numerous reforms during his one term in office, West played a behind-the-scenes role in Oregon's Democratic Party over the next several decades. His homespun philosophy and colorful memoirs about causes such as good roads and saving Oregon's beaches made him a popular newspaper columnist in his retirement.

Born in Guelph, Ontario, Canada, to John and Sarah West, West came to Oregon with his parents as a four-year-old. His schooling came to an end at age fifteen, when he took a job at the Ladd & Bush Bank in Salem. For more than a decade, West advanced at the bank while developing an interest in politics. He saw how the bank’s co-founder, Asahel Bush, remained a force as a Democrat in Oregon in what had become a heavily Republican state. West later credited Bush with being a formative influence. He increased his political activity when he took a position at a bank in Astoria and supported state Attorney General George Chamberlain in his close campaign for governor in 1902.

Once Chamberlain assumed the governor’s office, on Bush’s recommendation he appointed West as state land agent. Thousands of acres had been fraudulently obtained by “rings” of speculators who had bought land at a fraction of its true value, usually assisted by corrupt officials (the "Oregon Land Fraud Trials"). West proved remarkably effective in recovering lands and using them to fund the state’s school system, which brought him to the attention of President Theodore Roosevelt. Even though Roosevelt was a Republican, he counted Chamberlain as a close friend. Oregon Congressman Malcolm Moody introduced West to Roosevelt’s confidant, Gifford Pinchot. All five men possessed a drive to prosecute land fraud, especially when it interfered with public control of natural resources, such as Oregon’s national forests.

By 1907, a time when shippers and passengers often vilified the railroads for their high rates, Chamberlain had appointed West to the position of state railroad commissioner. The job gave West enough visibility to run for governor in 1910. With the odds of winning stacked against him, he ran as a Progressive reformer and won by just 6,700 votes.

Thirty-eight years old when he assumed office, the “boy governor” championed woman’s suffrage, workmen’s compensation, prohibition, prison reform, federal control of natural resources, and good roads. After one term of office, he had created several state commissions, including those for fish and game, highways, industrial accidents, and public utilities. With an overwhelmingly Republican legislature, he set a record for the most vetoes by any Oregon governor.

West’s most famous achievement began as part of his 1913 biennial message to the legislature where he argued that the ocean beach, from north to south, should be declared a public highway. He wanted to extend an act that had passed in 1899, which mandated that the shore between high and low tides was a highway in Clatsop County, to remain forever open to the public. A bill to that effect passed both houses in less than a month, and West signed it on February 11, 1913. He later remembered finding his “inspiration” on horseback, having ridden from Elk Creek in Clatsop County, south to Cannon Beach, and then over Neahkahnie Mountain by postal trail to Nehalem.

The new statute affected only the “wet sand” between high and low tides, not the “dry sand” beaches used by the public for recreation. Nevertheless, West created the perception that the beaches were part of the public domain. Passage of the so-called Beach Bill in 1967 made public access to the shoreline permanent, but only because the doctrine created by West delayed private and commercial development of the beaches for more than a half century. Long after leaving office in 1915, he wrote: “No selfish interest should be permitted, through politics or otherwise, to destroy or even impair this great birthright of our people.”

In January 1915, upon completing his one term as governor, West went back to work in Portland as an attorney; he subsequently lost a bid for the United States Senate in 1918. He also worked as a paid lobbyist for the Pacific Power & Light Company for more than a decade and remained opposed to public funding for developing hydropower on the Columbia River. West continued to wield political influence among Oregon Democrats during the 1930s, particularly among the conservatives who promoted industrial development through the private sector and opposed organized labor. This shift from progressive to conservative included playing the role of adviser for the anti-New Deal Democrat Charles Martin, who won the election of 1934 to serve one term as governor.

A heart attack forced West to retire in 1945, but his frequent newspaper columns influenced public opinion throughout the 1950s. Short Sand Beach State Park was renamed for him at a ceremony held near Arch Cape in 1958. He died two years later in Portland after a long illness. His ashes were scattered at Haystack Rock on Cannon Beach. 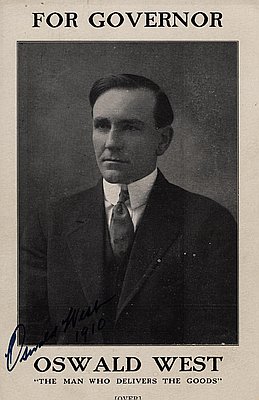 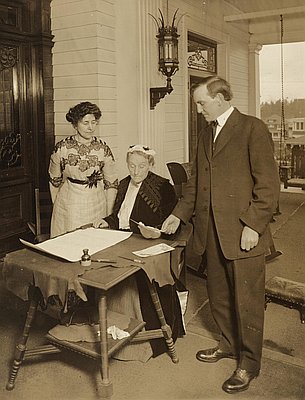 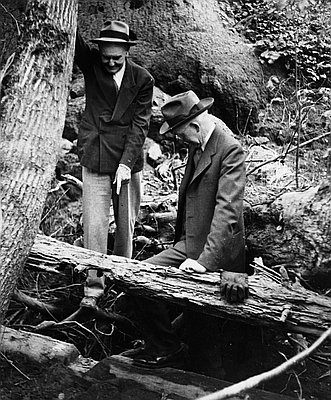