Skiing enthusiasts in Portland just before World War II knew the name Hjalmar Hvam as readily as most people recognize the names of professional athletes. Inducted into the National Ski Hall of Fame in 1967, Hvam was the dominant downhill and cross-country ski racer in the Pacific Northwest during the 1930s. He was also the inventor of the world’s first workable safety ski binding.

Born in Kongsberg, Norway, in 1902, Hvam grew up on a farm, where he took to skiing early and won prizes in local cross-country and ski-jumping meets by age twelve. He often told the story of delivering pails of milk from his family farm to neighbors on skis, flying downhill and never spilling a drop. In 1923, he immigrated to Canada with his brother, Ingvald. He relocated to Portland in 1927, where he worked for Multnomah Lumber and Box Company. Within a year, he was lured to Mount Hood and the newly formed Cascade Ski Club’s jumping hill at Multorpor, where he first established his expertise as a premier ski jumper.

During the 1930s, no one in the region could match Hvam’s racing success. He also recorded what may have been the first ski descent of Mount Hood from the summit in 1931. In 1932, he won the cross-country, jumping, and Nordic combined national skiing title at Lake Tahoe. By 1934, Hvam had taken up downhill skiing and had perfected his slalom racing technique, winning his first major race at the Oregon Slalom Championships. Two years later, he won the Silver Skis downhill race on Mount Rainier, one of twelve races he won in 1936-1937, including stunning first-place finishes at the Mount Baker meet in slalom, giant slalom, cross country, and jumping events.

By 1936, Hvam had become such a skiing icon in the Pacific Northwest that he decided to open a ski shop in Government Camp with his wife Vera and business partner Ole Langerud. A skiing accident in 1937, however, became the pivotal event in his life and led to his revolutionary invention.

After winning the Golden Poles race at Mount Hood, Hvam broke his leg while doing some cornice jumping with friends. In the hospital, he had a dream about the mechanics and dangers of flying downhill with boots jammed into steel “beartrap” boot irons. Asking for pencil, paper, and ruler, Hvam sketched out the design concept of his safety ski binding. By 1939, and after breaking the same leg a second time, he had worked out the details for the binding, which featured a pronged, triangular pivoting toe-piece that fit into notches at the front of a skier’s boot to provide quick release whenever angular stress threatened to twist a leg. The first manufactured Saf-Ski bindings were used by the U.S. Army’s 10th Mountain Division in World War II.

After World War II, Hvam opened a new ski shop in Portland in the Uptown Shopping Center on 23rd Avenue, which became popular with local ski racers. His production of Saf-Ski bindings increased exponentially, as rental shops around the country bought them up. In ski magazines, his advertisements proclaimed “Hvoom with Hvam—and have no fear!” By the 1950s, European ski manufacturers had introduced their own bindings, diminishing Hvam’s market share. Nonetheless, he continued to innovate, introducing a cable front-throw in the late 1950s.

In 1952, Hvam served as a jumping coach for the U.S. Olympic team that competed in his native Norway. He continued skiing into his eighties, usually leaving his much younger companions awed by his strength and expertise. After closing his ski shop in 1961, Hvam produced his bindings out of a home shop in Beaverton. He died at home of heart failure in 1996 at age ninety-four. 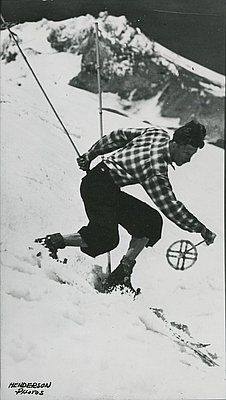 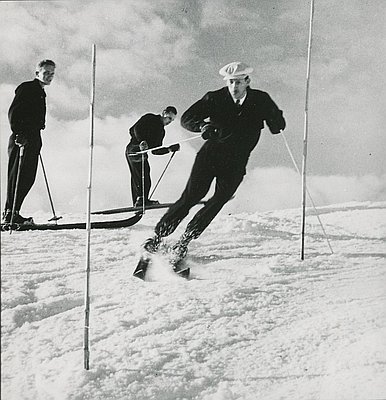