In February 1927, the forty-two-mile, round-trip, cross-country ski race from Fort Klamath to Crater Lake ushered in an age of Nordic ski competition in Oregon. While cross-country ski races had been held earlier in the United States, including in California in the mid-nineteenth century, recreational and competitive skiing was in its infancy in Oregon. The Fort Klamath to Crater Lake ski race was the first documented organized race in the state. Within a year, three new outdoor clubs in Oregon focused on winter activities, including the Skyliners in Bend, the Obsidians in Eugene, and the Cascade Ski Club in Government Camp. All three clubs organized cross-country ski and ski-jumping events.

It was an improbable match—cross-country ski racing and Fort Klamath, a southern Oregon ranching community with a population of 224 people. Born out of a need for winter entertainment, locals formed the Fort Klamath Winter Carnival and established the race in 1927. Townspeople and local ranchers donated cash, and other residents of the Wood River Valley pitched $400 for cash prizes. News of the race spread to experienced skiers, mainly Scandinavian immigrants, in Oregon, Washington, northern California, and British Columbia.

Organizers changed the name of the event to the Klamath County Winter Carnival in 1928 and kept spectators entertained with a community dance, short-distance ski races, and activities to occupy children and adults while the race was underway. Events included a blindfolded ski race, a barefoot run over snow, a forest rangers dash, and a hundred-yard relay race. After the first year, organizers added more races, including a women’s thirty-two-mile race and a Trailbreakers race that started at Crater Lake and finished at Fort Klamath. The Trailbreakers race helped pack the trail for the forty-two-mile race held later. Ski jumping, added in 1930 and held at Fort Klamath and Anna Springs (near present-day Annie Creek Sno-park), attracted additional spectators.

In an effort to draw more people to the carnival, the community decided to buy a trophy worthy of the ski race. With a successful fundraising effort, the race committee purchased one of the three largest trophies manufactured by Wallace and Sons. The Klamath, a solid silver trophy that measured thirty-seven inches tall with a winged figurine, cost $1,600.

In 1929, the Crater Lake Ski Club offered permanent possession of The Klamath to Emil Nordeen of Bend, who had won the race twice. Two years later, spectators witnessed an anticipated duel between Nordeen and the 1930 winner Manfred Jacobson of McCloud, California. Nordeen won convincingly, with a new course record of five hours and thirty-five minutes, a thirty-six-minute margin over Jacobson. The duel attracted four thousand spectators, a crowd that some attributed to widespread betting on the race. Nordeen later bequeathed The Klamath to the Swedish Ski Federation at the 1960 Olympic Winter Games in Squaw Valley, California. In 1980, at his request, the Swedish Ski Federation created Kalvtraskloppet, a cross-country ski race that allowed Americans to compete.

The Klamath County Winter Carnival ran from 1927 to 1938 and ended when interest and volunteer help began to wane and alpine skiing began to increase in popularity. The Klamath trophy is on exhibit at the Skidlöparmuseum in Norsjö, Sweden. 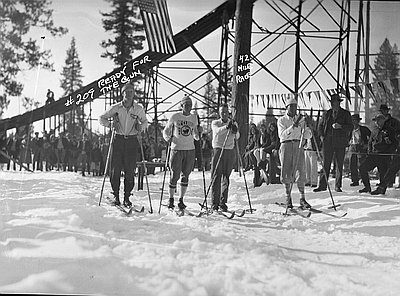 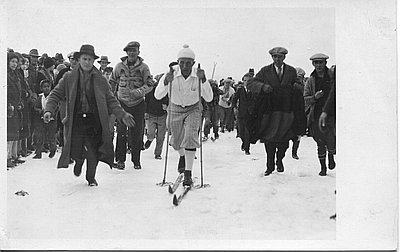 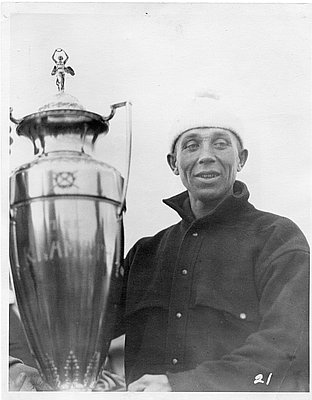 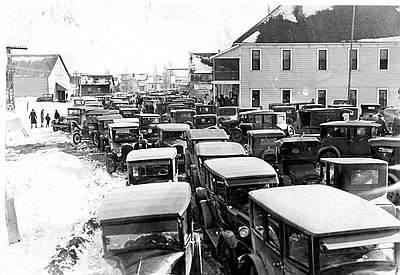 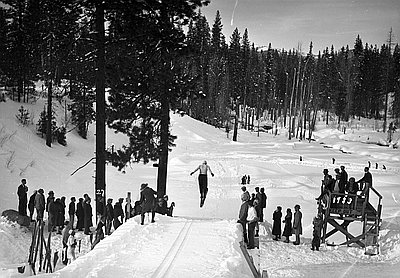 During the Civil War era, tens of thousands of people immigrated to the Pacific Northwest. While they avoided the war, they faced conflict with Native people whose homelands were being threatened. On the Applegate Trail, the new settlers met particular resistance from the Modocs, and the Oregon legislature called on the …

Skiing enthusiasts in Portland just before World War II knew the name Hjalmar Hvam as readily as most people recognize the names of professional athletes. Inducted into the National Ski Hall of Fame in 1967, Hvam was the dominant downhill and cross-country ski racer in the Pacific Northwest during the …