Prineville, the seat of Crook County in central Oregon, was established in the 1870s as an agricultural and ranching settlement. The town was platted between the Crooked River and Ochoco Creek, within a narrow valley bounded to the south by a prominent rimrock lava flow. Despite the rugged landscape, Prineville became a center of commerce for much of central and southern Oregon. With the nearest railroad center 120 miles to the north at The Dalles, the town relied on stage coaches and freight wagons as its principal forms of transportation. The wagon roads leading to Prineville, which followed trails established by Northern Paiute and other Native people, proved essential for isolated communities in southeastern Oregon to gain access to markets.

After topping the rimrock, wagons approached a fork in the road. One branch, the Prineville-Silver Lake Stage Route, extended south toward Silver Lake, Lakeview, Millican, and Linkville. The other branch, the Prineville-Deschutes Road, snaked west across the prairie toward Bend and Redmond. In 1906, the Oregonian hailed the thirty-five-mile Prineville-Deschutes Road as one of the finest wagon roads in the state, with its hard, smooth surface that enabled a wagon team to pass at seven miles per hour. Typically, such roads could only remain compacted during the dry summer months and were precarious during the winter.

Road construction over the next few years included the seventeen-mile Prineville-Redmond Road, completed in 1910. This route was also known as the F.T. Redmond Road, named for farmer Frank T. Redmond, a member of the Redmond Commercial Club who launched a systematic campaign for a direct county road from Prineville to Redmond. Much of the route, built to accommodate both wagons and automobiles, would later become the Southwest Houston Lake Road.

Crook County formed a Good Roads Association on May 7, 1913. On Good Roads Day in Prineville on April 25, 1914, work teams blasted out rock, leveled rough places, and filled chuckholes on nearby roads, including the stony bluff to the west. Under U.S. Forest Service supervision, thirty-five volunteers worked on rough and muddy sections of the Prineville-Redmond Road. The town’s third Good Roads Day, on March 24, 1916, was dedicated to constructing a new grade to replace the south-grade road, which was dangerous and difficult for vehicles with heavy loads. More than a hundred volunteers worked with pick and shovel and a horse-drawn plow to break up the rocky soil. Today, this road cut in the rimrock is still visible at Ochoco Wayside State Park.

Truck traffic on the Prineville-Redmond Road was reduced after the railroad connected the two cities on July 25, 1918, but automobile use continued to increase. Work began on the Ochoco Canyon Road along the Eugene-Mitchell Highway, and planning was underway for a new stage line between Prineville and Mitchell. Graveling of the Prineville-Mitchell section of the highway progressed for several years, and the Mitchell Stage was in operation by 1920.

In April 1919, the Oregon State Highway Commission allocated $300,000 for work on the Crooked River Road and the Prineville-Redmond Road in Crook County. The state combined the two existing roads into the new Bennett Highway, with Crook County contributing $95,000 in bond money to the project. Largely due to the efforts of Crook County Judge N.G. Wallace and a delegation of Prineville citizens, the State Highway Commission designated the road as a postal route, which allowed the use of federal money for improvements. The west end of the completed road connected at Redmond with the Eugene-Mitchell Highway. Later in 1919, the commission awarded Oskar Huber a contract to grade 15.2 miles of the Prineville-Redmond section of the Bennett Highway and to lay a gravel surface on 4.6 miles. Renamed the Prineville-Powell Butte Highway in 1920, the roadway between Prineville and Powell Butte was surfaced with crushed rock.

By February 1920, workmen had started construction on the hillside west of Prineville, using trucks and tractors, instead of horses, to reduce expenses and increase efficiency. In April, a fuel-powered Caterpillar tractor and a fleet of Mammoth graders arrived to grade the roadbed between Prineville and Powell Butte. A year later, the road leading from east of Redmond to Mitchell by way of Prineville was dedicated as the Ochoco Highway. The route was included in the State Highway System in 1939 and is currently part of Oregon Route 126. Segments of the abandoned Prineville roads can still be seen from the highway.

Veazie, A.L. “Address at the Dedication of a Monument to the Pioneers of Crook County at Prineville, August 7, 1938.” Oregon Historical Quarterly 39.4 (December 1938). 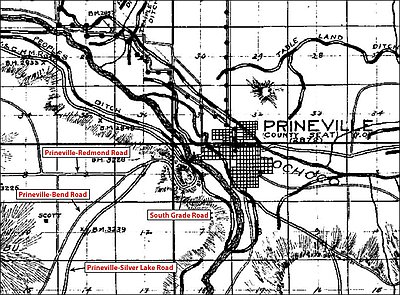 The Santiam Wagon Road was a vital commercial link connecting the Willamette Valley with central Oregon. Built between 1861 and 1868, the road, which closely followed traditional Indian trails, was in use into the late 1930s and made possible the settlement of central Oregon.

The Trask River Wagon Toll Road may have given travelers “the most awful ride in the world”—a description taken from a passenger's account written in 1889 for McMinnville's Telephone-Register. For nearly forty years, from 1874 until 1917, the 45-mile-long, steep, narrow route over Oregon‘s Coast Range served as the transportation link …