Rabbi Yonah Geller arrived in Portland in 1960 to lead Congregation Shaarie Torah in its new synagogue on Park Avenue. Even though the Orthodox synagogue had been a significant part of Jewish Portland since the turn of the twentieth century, Rabbi Geller understood that there was much work ahead for him.

"Traditional Judaism had reached its nadir in this community," he wrote, "and the synagogue itself had been neglected and static in its thinking, requiring a thorough and well planned rebuilding of its entire program. . . . What a marvelous opportunity if we could, together, create a thriving, modern traditional synagogue."

The son of an Orthodox rabbi, Yonah Geller was born in Houston, Texas, on August 15, 1920. He grew up in Galveston and received his bachelor’s degree in 1940 from Yeshiva University in New York City. With his rabbinical ordination from Yeshiva in 1944, Rabbi Geller became the seventh generation in his family to become a rabbi. His son, Rabbi Dr. Ivan Geller, carries on the tradition. In 1948, he earned a master’s degree from Texas A&I University (now Texas A&M).

Before moving to Oregon with his wife Lisl and three young children, Rabbi Geller was the rabbi of B'nai Israel Synagogue in Corpus Christi, Texas. He had helped start that city’s first Jewish community center to provide programming and to promote better relations between the Orthodox and Reform synagogues. In Texas, Rabbi Geller also had been an auxiliary chaplain for the U.S. Navy.

In Portland, Rabbi Geller set to work, but within a few months a crisis arose. The new Park Avenue facility was in the path of the 405 freeway, then on Portland’s drawing board. Rabbi Geller and his synagogue board would have to oversee another building project. The congregation’s home was built once again, and a new synagogue opened in 1965 on Northwest 25th Avenue.

During Rabbi Geller's forty-year tenure, the Board of Rabbis created the extremely successful Introduction to Judaism class, a unique collaboration of rabbis from orthodox, midstream, and liberal strands of Judaism. As Rabbi Geller told Portland Sephardic Rabbi Shlomo Truzman in 2004,"the future of the Portland Jewish Community lies in its unity regardless of anyone’s religious background or denomination."

Retiring from Shaarie Torah in 2000, Rabbi Geller served as Rabbi Emeritus at Shaarie Torah until his death on November 15, 2007, after a fall on his porch steps. 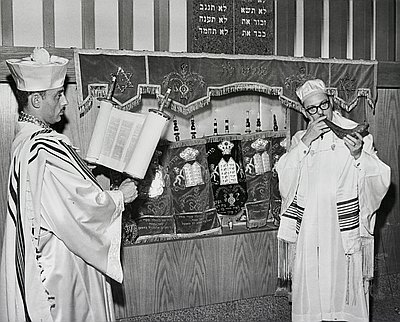 Congregation Neveh Shalom is the name of both a synagogue and the congregation that holds services and celebrations there. As of 2009, it was the largest and most prominent Conservative congregation in Oregon. Blending traditional observance with an egalitarian ethic, it is the spiritual home for more than a thousand …

Shaarie Torah is the name of both a synagogue in northwest Portland and the Jewish congregation that makes its spiritual home there. In Hebrew, shaarie torah means “gates to the Torah.” The first Orthodox synagogue in the Pacific Northwest, Congregation Shaarie Torah was formed in 1905 to meet the religious …