Congregation Neveh Shalom is the name of both a synagogue and the congregation that holds services and celebrations there. As of 2009, it was the largest and most prominent Conservative congregation in Oregon. Blending traditional observance with an egalitarian ethic, it is the spiritual home for more than a thousand Oregon households.

Eight men formed Ahavai Sholom, one of the congregations that would become Neveh Shalom, in 1869, when Portland had about 460 Jews. The new congregation, which appealed to traditional Jews from Prussia and Poland, purchased a cemetery and land for a building and hired a rabbi, Julius Eckman. Rabbi Eckman had previously held the pulpit at Temple Beth Israel, Portland’s first Reform congregation, primarily made up of German Jews. For the next thirty-five years, Ahavai Sholom made its home on Southwest Sixth Avenue between Oak and Pine.

Two more congregations were founded in Portland in the 1890s, Talmud Torah and Neveh Zedek, which formed to accommodate the Eastern European and Russian Jews who were then arriving in Oregon. By 1902, the two congregations had merged, and congregants who preferred more traditional observance had moved to a new Orthodox congregation, Shaarie Torah.

By the start of the twentieth century, Portland synagogues represented the three main strands that were to reflect Judaism in America for the remainder of the century: the Reform, the more progressive Beth Israel; the Orthodox, the more traditional Shaarie Torah; and the Conservative, the Ahavai Sholom and Neveh Zedek Talmud Torah.

Subsequent years brought both stability and challenges. Ahavai Sholom was badly damaged by fire in 1923, and both Conservative congregations struggled financially. This led them to consider, but not undertake, a merger. While few rabbis stayed long in either place, Rabbi Charles Sydney led Ahavai Sholom from 1937 to 1951, and Rabbi Philip Kleinman served at Neveh Zedek from 1937 to 1956.

In 1952, Ahavai Sholom erected a new building at Southwest Thirteenth and Market, and the following year the dynamic Rabbi Joshua Stampfer arrived. Ahavai Sholom began to attract young families, but Neveh Zedek declined in membership, primarily because its congregation was older and the synagogue lacked facilities suited to children’s programming. When it was learned that Ahavai Sholom was in the path of a proposed freeway, the idea of a merger arose again, and in 1961, Ahavai Sholom and Neveh Zedek merged to form Neveh Shalom. In 1964, the congregation built a new synagogue on Southwest Peaceful Lane, which remains its current home.

During the next forty years, membership grew, programs expanded, and Neveh Shalom continued to modernize. The liturgy became egalitarian, and the congregation now offers classes, religious services, programs, and activities for all ages, including an innovative course for Jewish special needs students and immersion Hebrew for young children. Rabbi Daniel Isaak succeeded Rabbi Stampfer in 1993 and, with Associate Rabbi Bradley Greenstein, now leads the congregation. In 2008, Neveh Shalom completed a major remodel, renovating and expanding the original structure, to meet the needs of the next chapter in the congregation’s history. 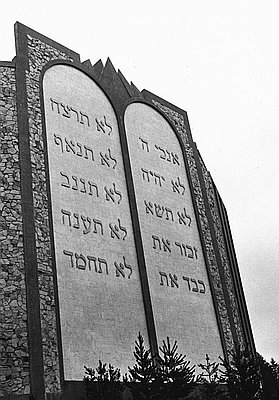 Shaarie Torah is the name of both a synagogue in northwest Portland and the Jewish congregation that makes its spiritual home there. In Hebrew, shaarie torah means “gates to the Torah.” The first Orthodox synagogue in the Pacific Northwest, Congregation Shaarie Torah was formed in 1905 to meet the religious …

In 1869, Bernard Goldsmith, an immigrant Jew from Bavaria, was sworn in as the mayor of Portland. Two years later, he was succeeded in office by his friend, countryman, and coreligionist, Philip Wasserman, a former state legislator who would later serve on the city’s school board. …