Prominent early Portland businessman and politician Henry Failing was born in New York City on January 17, 1834, to parents Josiah and Henrietta Failing. Attending school only until the age of twelve, Henry became interested and actively involved in the business world during his teenage years. On April 15, 1851, seventeen-year-old Henry left New York by ship with his father Josiah and younger brother John to relocate in distant Oregon. Upon arriving in June of that year, the Failings opened a small mercantile store on SW Front (now Naito Parkway) near Oak Street. In 1854, Henry became the majority owner of the family store and in 1858 was married to Emily Phelps Corbett, the sister of prominent Portlander Henry W. Corbett.

Henry Failing was first elected mayor of Portland in 1864, serving two consecutive fifteen-month terms. Declaring Portland's roads "a reproach to the city and its inhabitants," Henry Failing quickly introduced a charter amendment requiring property owners to fund the grading and paving of streets adjacent to their property. Following this initial action, Mayor Failing rapidly introduced new governmental efficiency measures and ordinances, many of which are still used today. Forecasting budget revenues, codifying city ordinances, financing gas street lamps, and funding the removal of snags from the Willamette River were just a few of the accomplishments of Failing's first year in office. When Failing ran for reelection in June 1865, he received 785 out of 790 votes cast, making his election the nearest to unanimous victory in Portland mayoral history. Although a successful and popular mayor for two-and-a-half years, Mayor Failing resigned, without recorded reason, in November 1866.

Joining with his father Josiah and brother-in-law Henry Corbett, the family bought a controlling interest in the First National Bank of Portland in 1869. Henry Failing served as president of the bank from that year until his death. In 1871, the family consortium formed the mercantile enterprise of Corbett, Failing & Company, an institution which they controlled until the 1890s.

In 1873, Henry Failing decided to run again for the office of mayor, this time running on the Citizens Ticket narrowly defeating his competitors by a forty-vote margin (out of 2,036). On August 2, 1873, a mere month after Failing took office, the largest fire in Portland's history engulfed twenty-two blocks along the Portland waterfront in the vicinity of SW Alder Street. While Mayor Failing received some criticism for his response to the fire, it was the mounting public opposition to several of the mayor's ordinances that caused him to lose his reelection campaign in 1875.

In addition to prominent roles in business and government, Henry Failing was heavily involved in the cultural and physical development of Portland during the 1880s and early 1890s. Failing, along with other prominent Portland investors such as William S. Ladd, helped finance the construction of the Portland Hotel, a 326-room hotel completed in 1890 on the site of today's Pioneer Courthouse Square. Failing served as a regent of the University of Oregon, a trustee and treasurer of Pacific University, president (and benefactor) of the Portland Library Association, chair of the Portland Water Committee, treasurer of the Portland Children's Home, and a founder of Riverside Cemetery. Henry Failing died on November 8, 1898. 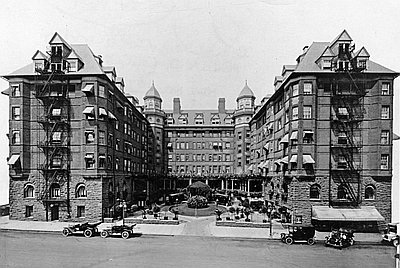